Fire on the Mountain recap

Edited to add: Fire on the Mountain was a fantastic race, put on by an extremely organized and friendly race director, and manned by selfless, cheerful, wonderful volunteers. The only problem with it was that I had no idea what I was getting in to and I was unprepared! I included the picture of the unmanned aid station to show how different this race was from a huge race like MCM, but the rest were all filled with helpful volunteers and my favorite race foods - cookies, M&Ms, salt and vinegar chips, potatoes to dip in salt, and Mountain Dew! If you love trail racing, this is a great event!

It's taper time, which arrives conveniently at the same time as Hurricane Sandy. I am as ready for the JFK 50 as I'm going to get. This weekend, I made some important final preparations. I bought tickets to Breaking Dawn 2 for opening night, which is the night before the race. I choose my post race dessert - chocolate cream pie. Simple, but I've never made it before. I also did a bit of running Saturday and Sunday. 52 miles in two days, to be exact.

I also learned some very important lessons this weekend. I'm embarrassed to admit that, because when I share them, you'll see how they would probably be evident to a 5 year old, so it's embarrassing that at 29 I just figured this stuff out.

Lesson 1: If you are browsing active.com, looking for a race to add to your calendar, and you see one that has the word "mountain" in the title, KEEP BROWSING.

Lesson 2: If for some reason you ignored lesson 1, clicked on the race, thought "wow, only $30, what a great deal!" and got your credit card out, DON'T run 20 miles the day before.

Friday night, I ran an easy, watchless 4 miles before getting an epic grilled cheese, tomato, and bacon sandwich from a food truck and watching Clueless at my BFF Carolyn's house. Jealous? You should be, but don't worry, that will change as I continue with my weekend recap.

Last week, the day after my 20 miler, I did 12 glorious, seemingly easy miles the next day, and got the brilliant idea to run 50 miles in one weekend as my last big hurrah before tapering. So, saturday morning, I had total deja vu as I met my friend Matt for a 20 miler at the exact same place as last week (the NCR, a long, flat, path) at the same time (7:30) and I think our pace was about 2 seconds a mile faster (10:12). Once again, it seemed pretty easy, and I felt good enough afterwards to do a whole bunch of errands and laundry and stuff like that.

Oh, the run was even extra special because I met a blog reader, Erin! The fact that anyone actually wants to read my writing still amazes me, so it was super exciting.

Saturday night, I refueled with a massive amount of tortellini and watched my favorite movie, Gone with the Wind, in honor of the fact that my 50K would potentially take place in a hurricane.

Sunday morning, my alarm went off at the God forsaken time of 2:40am. My 2.5 hour drive to the race was uneventful except for the fact that I missed hitting a deer by inches, only because that particular deer didn't have a death wish and stopped and waited for my car to pass before crossing the highway.

The directions from the race website directed us to drive a field, in the middle of nowhere, on a mountain. In retrospect, the whole race could have been a scam put on by a murderer, but luckily it wasn't.


Then we took buses up the mountain to the start.


I met up with crazy impressive super ultra runner Shelly, and got to know her as we ran together for the first few miles.


My goal for this race was to run it easy enough not to require extra time off for recovery. I'm not usually at all competitive with anyone but myself during races, but I did have an important goal during this race: BEAT SANDY.

My legs felt fantastic, like yesterday had been a rest day, so despite my early wakeup call, I was excited for the race, thinking it would be a fun day in the woods. That lasted right up until I started running on the trails.

Just take a look at the elevation. Particularly miles 2-4.

I may have gone into this race with the mileage necessary to complete it, but I haven't run on trails since my last 50K in July and I was completely unprepared for this elevation. Right away, we were going down a super steep incline. Just imagine running on a slip and slide, which is on loose, shifting dirty, and littered with random, jutting rocks, ready to take you out with one false move. At this point, the race was still "crowded" (less than 100 people, but that's a lot on a single track trail). So slowing yourself down was impossible, and even if you could, the person pounding down directly behind you would probably smash into you and push you to your death.

I fell right after I hit mile 2, and while I was fine, it freaked me out. Then, it was time for that super fun climb you see at mile 4. This is where walking had me so winded I was gasping for air. I'm not afraid of heights, but that next decline, on the backside of mile 4, was horrific. We were on the side of a mountain, and I made the mistake of looking down, and I had to grab a tree and stop because I was too paralyzed with fear to continue. It was around this time that I was about 95% sure that I was dropping out at the halfway point. I couldn't imagine doing this for 28 more miles.

Obviously, it evened out a bit after that, although there were plenty more crazy ups and downs. The leaves were killer, hiding so many rocks and roots. They were ankle deep in a lot of places, wet and slick, and really a pain in the ass. There were a lot of stream crossing. I tried to step on a rock for the first one, and it might as well have been covered in vaseline. I fell in the stream, aka learned the hard way to just suck it up and get my feet wet.

I ended up running with a girl Shelly knew, Darla, who turned out to be my saving grace. She had run the race before, but hadn't really trained for it, and was doing a lot of walk/running. I joined up with her, kept things at an easy pace, and chatted, and started to feel like there was a possibility of me finishing.

Miles 16 through maybe 23 were logging roads, which everyone was looking forward to on the tough trails in the first half. It was nice to be able to see where I was running and not fear imminent death for awhile, but I wasn't able to easily cruise along as I had imagined. They were still rocky and had some steep hills. Still, not crunching on leaves meant Darla and I could actually talk, so the time passed pretty quickly.


I stayed with Darla until about mile 24, and then was able to speed up a bit. I chatted with some other runners, enjoyed nature (just kidding, I wanted to punch nature in the face by then), and was so excited when I found Shelly again around mile 26 or 27 or somewhere late in the race, I really was too delirious by that point to read numbers.


I checked my phone walking up yet another steep hill at mile 28, and saw a text from Eric that school was canceled for the next day, compliments of Sandy. Excitement from that fueled me through the hill, and fantasies of how much red cat (super sweet, classy wine) I was going to drink got me through at least another mile.

The last few miles actually felt pretty easy, although mentally I couldn't wait to be done. When you exit the trail into the parking lot where our cars were, a volunteer hands you a log. Instead of going directly to the finish, you have to run a lap around the parking lot with the log before finishing and throwing it into the fire. Torturous, but a fun little twist.

The race was sponsored by Sheetz. I'm obsessed with their lattes, so having a truck handing out free ones at the end made up for the 7+ hours of torturous running on mountains. Kidding, it SO DID NOT. 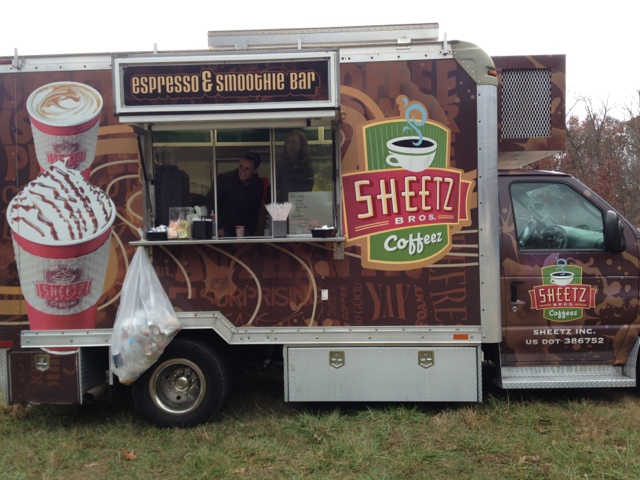 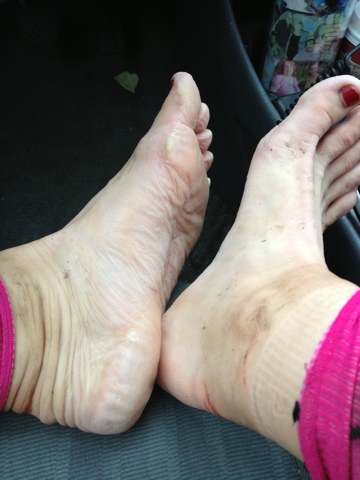 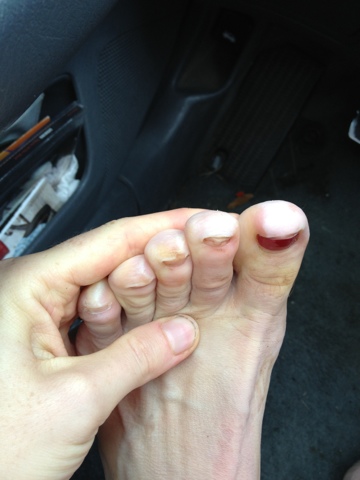 I was extremely concerned about trying to drive home in a hurricane after 3 hours of sleep and a full day of running. Luckily, the weather stayed perfect and I was able to make it home easily.

Now it's time to celebrate my survival. Homemade candy corn ice cream with homemade fresh whipped cream and chocolate covered pretzels, because no dessert is complete without chocolate. 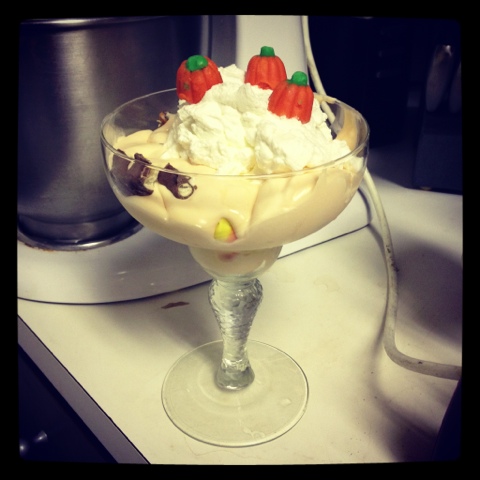 What was the hardest race you've ever done?
Posted by Alyssa at 9:07 PM