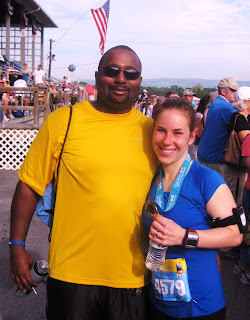 I was actually so excited about this goal I started 2010 with a 5 mile run as soon as I woke up on January 1st. I started training immediately (even though the race was 5 months away)! I guess I got a little too carried away because by February 1st I developed a knee injury, most likely from jumping into twice weekly speed training when I had never done any previously. Oops. I also signed up for a full marathon in October with a friend in Chicago, and dragged said friend out of bed at 7am the next morning for a 12 mile run. In January. In Chicago. It was 10 degrees out (literally). 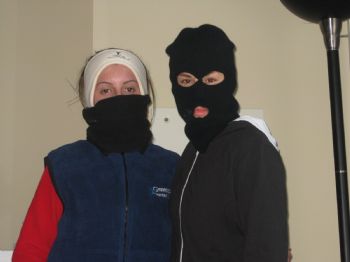 Surprisingly she is still my friend, but that combined with a 4 mile run the day before and hours walking around sightseeing was not smart. Bye bye running for the next 6 weeks. I didn't exactly take this too well.

FINALLY after I rested and got some physical therapy I was able to run again in Mid march. I got back into it slowly and followed a 6 week plan to train for a half marathon that I just happened to read in Runner's World 6 weeks before the race!

Saturday, my husband and I headed to Frederick (about an hour from Baltimore, where we live) after a minor meltdown over my Ipod briefly not working (may or may not have involved some tears). I picked up my packet and we headed to an amazing dinner, which of course was followed by ice cream (pre and post race tradition). 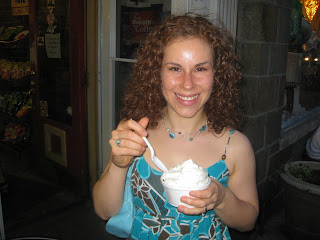 We went back to the awesome (read: ghetto) Motel 6 where our room reeked of wet dog. (Seriously, we had to wash our clothes the second we got home the next day). After being excited and not at all nervous for this race for weeks my stomach was filled with butterflies! I discovered Meet the Fouckers was on HBO - perfect to help me relax! Oh wait - after 5 minutes the cable gave out. Probably because they didn't pay their bill. Awesome. Nerves back on.

I probably got about 4-5 hours of sleep but I jumped out of bed when my alarm went off at 4am because I was excited! Also I needed to have my breakfast eaten asap so it would have time to digest. I ate my overnight oats in bed while reading Hal Higdon's marathon book for inspiration (which worked). I headed out about 4:45 to run for a few minutes to warm up. It was already warm enough that a tshirt and shorts felt comfortable, and predicted to reach 90 later that day! After a week where the temps barely left the 50s this was a big jump. I warmed up, stretched, and woke Eric up around 5. A little sunscreen and toothbrushing and we headed to the fairgrounds for the race. They started closing the roads as soon as we parked - made it just in time!

Of course we hightailed it to the porta potties (and then I made ANOTHER run before the race started). We waited around for about an hour (most of it spent in porta potty line) and then got to the start only about 8 minutes before the race. Before I knew it it was GO TIME!

Surprisingly the only difficult mile was Mile 1! Never thought I'd say that! The race started at 6:30 am, and it was already HOT. I was sweating before my first song ended. I'm also used to running with my camelbak so having to wait for the aid stations instead of drinking whenever I want to was a little different. All I could think was how hot I already was and how thirsty and how long until the next aid station. I kept thinking "If I am this hot now, I'll never make it through the race". Then the first mile marker popped up before I knew it and I somehow snapped out of it. Mile two had an aid station and Eric was meeting me so I started feeling good.

I was so excited to see Eric at Mile 2 and 4. For my first half, I forbid him to come to any point on the course because I was so nervous that he wouldn't make it to the finish line if he did because of all the road closures. This time I knew I'd be seeing him and it made the race so much happier!

I mostly just enjoyed my special Frederick playlist, enjoyed the scenery, and tried to have fun! After my injury I kept reminding myself how lucky I was to be running this race when there were so many times I was afraid I wouldn't be able to. I was a little disappointed with the spectators. During the Baltimore half, every single one of the 13 miles had the sidewalks lined with cheering fans. Frederick - not so much. Here or there you would see someone holding a sign but they only seemed interested in cheering for whoever they knew. Not cool, Frederick.

The whole time I was terrified to look at the time on my garmin, and only looked at the pace a few times in the beginning to make sure I didn't start out too fast (a problem I have) and burn out later on. I wanted to make my goal so bad but I also didn't want to be disappointed and not enjoy the race if I didn't. I tried to keep a pace that felt comfortably hard. I sort of thought I was doing well but I wasn't sure and didn't want to count on it!

I didn't think I would see Eric after mile 4 (until the finish line) but he surprised me by pulling his bike up next to me at mile 11! I guess he had asked a policeman a good place to meet up with the course again and it turned out he was close by. I was so excited! He rode beside me a little but it was actually too distracting because I just wanted to chat with him so I told him to go ahead. He took a little video of me at mile 12 then headed towards the finish. I was so excited there was only 1 mile left and I still felt strong!

There was a little hill right before we returned to the fairgrounds but at that point it felt more like Mt. Everest. I pushed through it and ran towards the finish. I wanted to sprint but couldn't until the absolute very end when I got that final burst from actually seeing the balloons at the finish line. When I crossed, the clock said 1:51! Considering I would have been overjoyed with 1:59:59 I was in SHOCK and SO EXCITED! I got choked up and wanted to cry but there were absolutely NO LIQUIDS of any sort in me at that point, I was literally drenched head to toe in sweat (at this point the temp was probably in the 80s). Gross, I know, sorry, but it happened. Also some awesome people had their sprinkler out around mile 5 so all the runners had gone through it. And I suck and half of all the water and powerade I drank ended up on my shirt. So all these factors contributed to my soaking.

ANYWAY I went through the little thingie with the free food and stuff and came up BEHIND Eric who was watching for me to finish around 1:55. He was shocked when I tapped him on the shoulder and said "you destroyed two hours!" and immediately posted my time on his FB status, which I thought was super sweet. I could not have done this race without his support, FO SHO. About 10 minutes of jogging/walking to cool down, some stretches and pictures later, we got some coffee, headed back to dog pee motel, showered, and were on our way HOME.

In October my friend's daughter was running the Baltimore Half as well and she was planning eight and a half minute miles. I said to my friend "wow, I could NEVER do that". 7 months later I ran a half at an average pace of 8:27! I guess it proves, with training, anything is really possible!
Posted by Alyssa at 7:46 PM No comments: