I really wanted to get a post up while Remington still is 19 months old (I only have 2 more days)!
This age is so amazingly fun. We are all constantly laughing at her antics. She wakes from a dead sleep, rolls over and looks at me and yells "MOMMY! Put back!!!" while handing me the 4 or 5 pacifiers she insists on sleeping with, then starts frantically bouncing while saying "downstairs!". 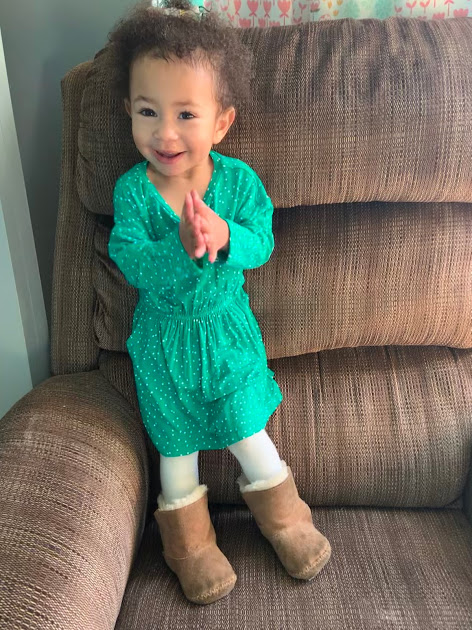 It's a special age to me because that's how old Dalton was when Royce was born.

It's insane because I know #twoundertwo is a whole thing and many people found it surprising I was having a baby when I already had a baby. But I remember thinking at the time that Dalton seemed like such a big kid and not like a baby at all. Maybe it always seems that way with your oldest? It definitely has for me. Dalton still seems practically like an adult now at 5. He's basically my coparent. The person I can roll my eyes at when the other two are tantrumming and everything is going downhill. He's so aware - I swear he knows how to do some adult tasks, like change batteries, better than me. He keeps track of the days the recycling and trash go out and brings the cans out for me. He's so creative, coming up with crazy involved games that entertain the other two. I got a compliment on this silly game I was playing with them in a park the other day and I had to fess up that I was just following 5 year old orders. 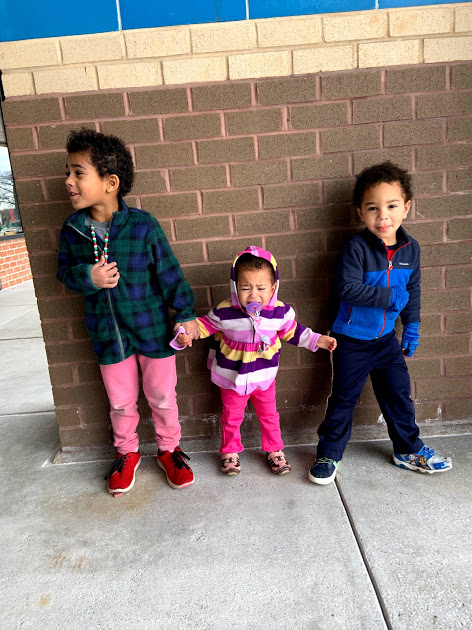 Now, with Remi at the same age, the idea of bringing home a newborn is laughable. It seems utterly ridiculous. I mean, look at her! She's clearly a baby, right?

Maybe the youngest just always seems like a baby? She will do things, totally normal things like bring me a book to read, and I remember Dalton doing them at this age, and I still remember thinking it seemed so mature when he did them and so sweetly babyish when she does them. It's all relative I guess.

I've had people ask me for tips on #twoundertwo a few times over the years and I never have any. I'm not sure if it was just all a blur, or Royce was such an easy baby it wasn't bad, or my expectations were just so low that the reality had to exceed them? Eric also had 7 weeks of paternity leave, so I had quite a while to recover from delivery and adjust before I was really in the trenches, 2 on 1. I'm really glad I have a blog because I've gone back and read posts to see what it was like and they can be quite surprising! I seriously have very minimal memories and the ones I do have are good! It's amazing how two kids screaming can make you lose your mind on your own but when your partner is there it's possible to just laugh and say I guess this is our life now.

One thing I was pleasantly surprised by was how gentle Dalton was with newborn Royce. I swear he had never been gentle a day in his life and I had a panic attack around 8 months pregnant that we had "waited too long" to teach him gentle. But he was always so sweet with his baby brother and he is still like that to this day.

Furthermore, Royce is currently 4 months away from turning 4.

This is the exact age Dalton was when Remi was born.

Same story. I thought Dalton was so much older then, old enough to comprehend the idea of a baby coming, but he really didn't show any interest when I was pregnant.


Now at that age Royce seems so mature sometimes, but still like such a little kid other times. He comes up with this crazy imagined stories and games, plans ahead and comes up with strategies during board games, takes care of his little sister, gets himself dressed and on the bus every day, but he will still throw himself to the ground and scream and sob when I tell him he has to eat his fruit snacks at the table and not on his way down the slide. Maybe that's why 3 is such a hard freaking age. Smart enough to manipulate and argue but immature and lacks any and all impulse control.

On a similar note, advice for 3 kids under 4? It's chaos. Just accept your life will be chaos and keep going. I recently read the book "The Need" and I loved how the author described parenthood. Melting....maddening. Repeat infinity. My kids melt me by handing a prized item to their sibling to cheer them up. Immediately followed by the maddening that is prolonged sobbing due to the cereal that they themself picked out at the store not being acceptable anymore, nor is any other food in the house acceptable. Finally move on from that. Agree to eat another cereal. Marvel at how mature and independent they've become, pouring their own cereal. Another kid comes along and spills it. Run down the hall to grab a towel, and hear screams and MOMMMMMMMMY because they just couldn't wait one brief moment until I returned. It's a never ending roller coaster of intense emotions for me. There are few moments of being even keeled, just existing. It's overwhelming joy and infuriating frustration constantly overlapping.

But, I've said it before and I'll say it again. The most difficult transition is going from 0 children to 1 child. Three kids can be challenging but nothing is tougher than just going along, living your life, being in charge of your own day, to suddenly being the parent of a newborn. 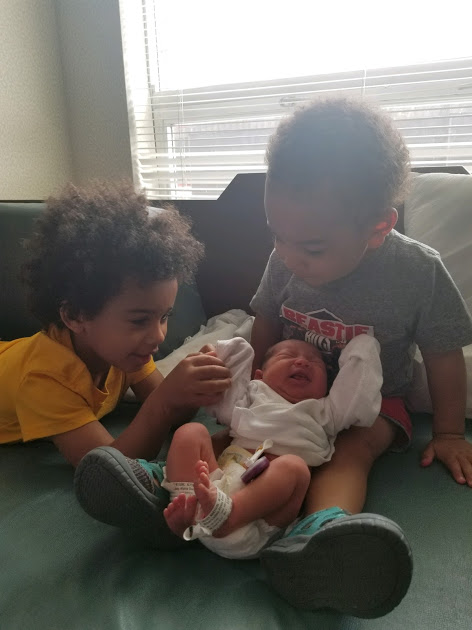 Eric took down Remi's crib this past weekend. She's napped in it occasionally but infrequently, and never slept overnight in it. Bedsharing has been working well for us, and at this point, when she is ready to sleep on her own, it makes more sense to transition her to a bed. So we set up the futon we were using in the basement playroom as her bed for now, although probably just for naps. At night she will still sleep with me. I thought I would be sad, for the first time in nearly six years, since I was pregnant with Dalton, there's no crib in the house. We are officially done with that stage of life. I felt fine though. While I've loved the baby stage, I'm enjoying the kid stage quite a bit more. The closer and closer we creep to having 3 kids, versus 2 kids and a baby, the more fun things are getting. Now, if only we could also say goodbye to the diapers - there's one baby thing I really won't miss.

Posted by Alyssa at 2:18 PM No comments: