Another LONG race recap. Get ready.
This morning I was ready to take a creepy picture and leave at 4am for the Columbia Irongirl Triathlon! 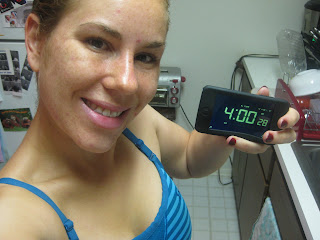 We wanted to get there at 5am to get the good parking. Mission accomplished. Thank god for coffee.
The first thing to do was get body marked. 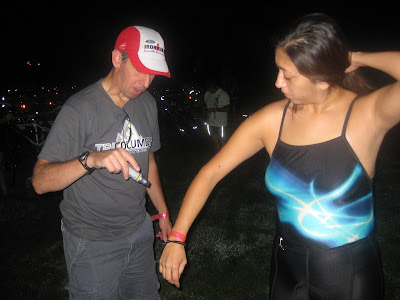 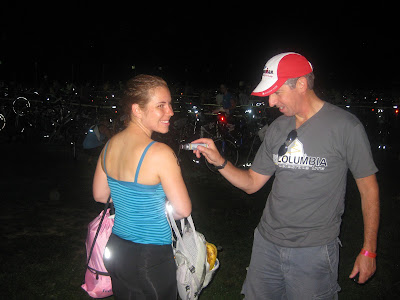 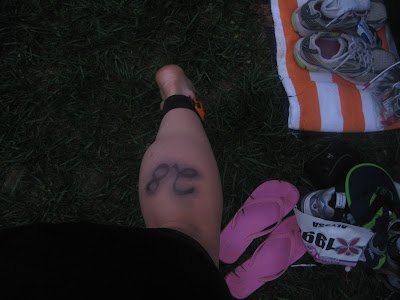 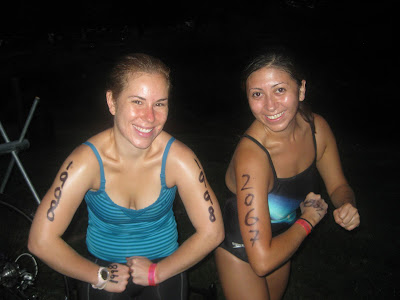 We failed to take into account that it's pitch black at 5am, making it a bit tough to see to set up your transition area. There were actually girls wearing headlamps and we wished we had brought ours. This transition area is a joke. You're supposed to organize everything a certain way to get out super quick, but I basically threw everything on the ground under my bike. But, I did remember to open my camelbak (so I could drink out of the nozzle) and my Gu, and put my Gu in a non-zippered pocket! 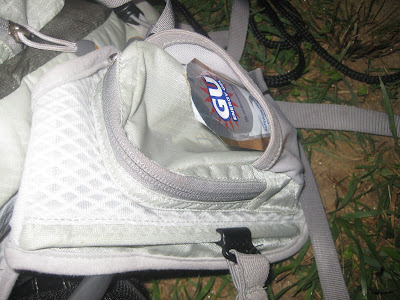 Next order of business - actually put on the timing chip, aka be official participants of the race. I mean, obviously. It's not like anyone would ever forget that part. 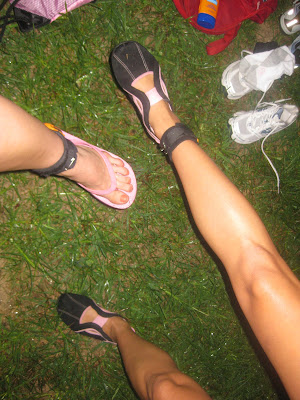 We had been told it was super important to pump up your tires, even if they felt totally full already. Genius that I am, I had never used our air pump, always letting experienced bikers take care of that little detail before rides (or, um, totally skipping it).
We ended up not being able to attach it to the tires correctly, I accidentally let all the air out of Lily's tire (I know, don't you wish you could race with me?), and running to the lines of people wisely waiting for pros to pump their tires. Crisis averted, but barely.
Even though we got there at 5am, the transition area closed at 6:30, and we didn't leave until about 6:23. Are you runners appreciating how much more work this race is than pinning on your bib number, showing up, and running?
After finally leaving transition, I got my first (but not last) barefoot port -o-potty experience. I hadn't realized that almost everyone just wore their flip flops to the lake and ditched them before the swim. The sad part is that I realized this before we left transition, knew my flip flops had cost $1, hadn't even paid that because my mom gave them to me, and STILL couldn't bear to part with them. I don't know what barefoot runners are thinking, that walk to the lake hurt. 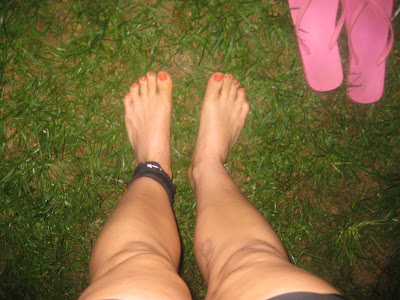 In line for the port-o-potties, it started raining. As we walked to the lake, it started pouring. All these girls were trying to find cover under trees and stuff to stay dry and it was taking all my willpower not to scream "HELLO, we're about to jump in a LAKE!!!".
Naturally, I started panicking about riding my bike on wet roads. The well intentioned announcements every thirty seconds about being careful because the roads would be extremely slippery weren't helping. The other awesome part was that all our stuff would now be soaked. Biking shoes, running shoes, socks, towels, helmet, all of it was out in the rain. YAY!
It started thundering and lightening and they announced that the start would be postponed and they would reevaluate the weather in ten or fifteen minutes to see if it was safe for the race to go on. After already being cheated out of one tri this summer, you better believe I would have been pissed for this one to be canceled!
Luckily, the storm passed, and the swim began. There were 15 waves, identified by different color swim caps. We were in wave 12, so despite arriving at 5am, leaving transition at 6:30, we didn't enter the water until 8:20! After we got in, everyone walked to the first buoy, and then they counted down, and it was time to swim or drown.
You can't exactly take pictures during a swim, so here's a picture from today that was on the website of another wave starting. 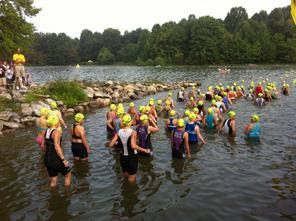 I had been warned that the lake was full of goose poop, but, I didn't encounter any - sorry Kara!
My open water swim practice did not fully prepare me for the triathlon. I was glad I knew how to sight, and swim without being able to see, and all that, but I got a little freaked out by all the other people. At the beginning, I should have just pushed ahead, but I was nervous about bumping into people and kicking people and getting kicked, so I hung back and wasted time.
I felt really tired at first, but that always happens when I swim, and I knew once I warmed up I'd be fine. I really wished I had trained more though. I could tell my form was way off and it was slowing me down, and I felt like I could never catch my breath.
We basically made a giant rectangle, and when I was going around the corners, aka the buoys, I made the mistake of sticking way too close to them. Like in any race, the fast people want to follow the tangents, so now I was pretty much in the "fast lane". I didn't realize my mistake until the first blue capped person nearly swam over me without batting an eye. They started five minutes after us, which made this girl super fast. More and more kept coming. I tried to go diagonally to get out of the way, but that was tough to do without wasting a ton of time and energy. Even worse than the blue caps swimming over me was when the purple caps started to - they were TWO waves back and still trampling passing me! This was totally messing with me and even though I felt fine physically, the swim was tough. The distance was .62 miles, but results aren't up, so I don't know how long it took. The one consolation was the sun came out, and I really hoped it was drying the roads for the bike course.
Getting out of the water and running to transition felt so weird! My legs felt really heavy, but I got out of transition as fast as I could and headed out to the bike course. Lily came over to her bike from the water just as I was wheeling mine out, which worked out great, because she caught up to me after a few miles.
The bike was shockingly my favorite part of this race! My wish had come true and the roads were now dry. This was the first time ever that I wasn't at all frightened on the downhills - I actually looked forward to them giving my legs a break and as a chance to pick up speed - this was a race, after all! My maximum speed was 34.3 miles per hour.
The hills seemed even hilly then the times we had ridden the course before, and at mile 7, I started really regretting yesterday's 18 miler. Or my legs did, at least. But, I was really proud that I not only drank out of my camelbak, but ate a Gu while riding, AND opened my zippered pocket to hand Lily a Gu, did it again when she didn't like the first flavor, and then took her trash and put it back in the pocket! For not even being able to scratch my nose while riding because my balance was so bad, I'd say that was an improvement.
A lot of girls walked their bikes up the hills, but we forced ourselves to ride them all. I honestly expected to have people flying by me the whole time, but the wave system had everyone spread out nicely, and I even passed a few people myself.
My first time riding the course, my average speed was 12.3 mph. The second time, 13.1. Today, it was 14.7! Official results are not in, but according to my Garmin, I covered 17.53 miles in 1:11:25.
Transition 2 took 2:17 - switching shoes, grabbing my hat and water bottle, and that was about it. Wait, why did that take two minutes and 17 seconds?
At about mile 16 on the bike, Lily and I had both said that we felt great from the waist up, but my legs felt trashed and I was pretty nervous about the run. Like, I honestly didn't feel like I could run 3.3 miles.
If you've ever run a marathon, imagine running miles 23 - 26.2 almost entirely up huge hills. I'd been warned about the run, but it was so much worse than I could have imagined. I can't even remember a time when I was so out of breath and my heart rate was so high, all while my legs were just screaming. It seemed to go on forever - you'd get to the top of a hill, only to be looking up at yet another hill. At the beginning, they'd honored a women competing who had recently had one of her legs removed and was doing the whole triathlon with her new prosthesis.  So I just kept telling myself that if I had two legs, I couldn't complain. It seemed like almost everyone was walking.
I wouldn't have been surprised to see I was running 12 minute miles, so when I got home, I was shocked to see my average pace had been 9:02! No idea how that happened. 3.39 miles in 30:37.
At the finish line, they announce your name, and tell you that you are an irongirl, so that was pretty cool. We got our medals, immediately signed up for our post - race massages, stretched and ate bagels and bananas while we waited.
By the time we got our massages, cleaned up our transition area, got our bikes on the car, and got home, it was 1pm. For leaving the house at 4am, that was a long day! I had big plans in my head for brinner, but dinner turned out to be a bowl of cereal at 3:45. Followed by wine, which I managed to wait until nearly 5pm to start with. 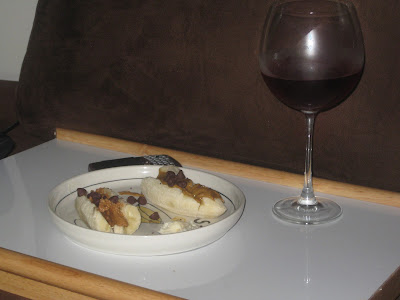 Eric found it hilarious that my post triathlon dessert was banana, peanut butter, and chocolate chips, but it's an amazing dessert.
It was tough, but we did it!
We are Irongirls!!! 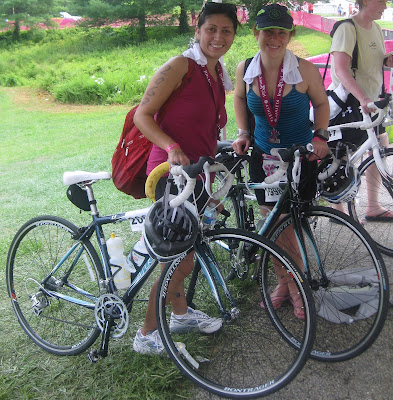