My life these days


1. Dalton got his first Christmas gift from our friend Casi. He could not have been less interested. I'm still excited for Christmas morning, though. 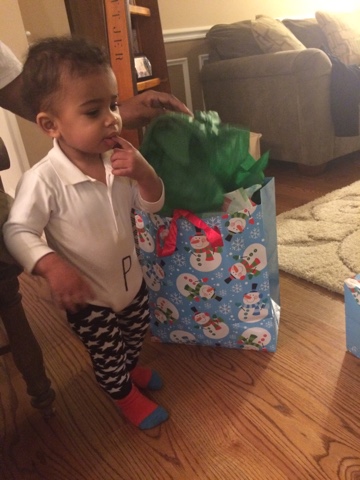 2. It had been too long since a good theme party was in our lives. Our friends recently refinished their basement and got a ping pong table and a pilates machine, so we had a PPPP party. Pilates, ping pong, pajamas, pizza. And other foods that began with P.

3. The great crib transition 2015. Nope, not to a bed. In case you were under any impression that my intelligence was on the high side, for some reason, Dalton slept in a mini crib up until this past weekend. Most people don't even know those exist, but, they do. I had no idea, we got the crib we registered for as a gift, and I was blissfully ignorant until he was many months old. I would seriously go to friend's houses and be like "their crib looks so much bigger! Must just be how the room is set up.". Can I blame sleep deprivation? Except I wasn't sleep deprived when I was pregnant and we registered for it, received it, and set it up.

In our original plan of children 3-4 years apart, this would have been a problem. On the #impulsebaby plan, it's not. We got a normal sized crib, which is now Dalton's. The baby will take the mini crib, and by the time he or she is too big, Dalton will have figured out his crib escape tactics and we will have been forced to provide him with a bed. Plus, now Dalton is psyched about all the room he has for activities and thinks life is awesome. I would show a picture of it but I forgot and he's asleep now.

We had big plans to go to the DC zoo Sunday afternoon to see their amazing Christmas lights. Had is the key word there. When I got Dalton up from his nap, he was burning up, and his temperature was 103.3. I know it was probably the hormones, but that's way too close to the "it's time for the ER" level and I was pretty freaked out. We got it down, but it was still 103 Monday morning and Eric took him to the doctor.


Of course, it's a virus. Don't we all hate that? Just give me MEDS to FIX THIS. I stayed home with him today, and his fever was down to 101.8 when he woke up this morning.

This kid is a TROOPER. He was still laughing and giggling and of course his appetite was only mildly affected. He was extra clingy and cuddly, and I can't say I minded. He's also been sleeping a ton.

I've never lumped myself into the group of "too busy to grocery shop". Don't get me wrong, it's a legitimate group, I'm just saying I'm not a part of it. Too tired? Maybe. But not too busy.

I've seen Blue Apron on a million blogs and on Facebook, and always thought it seemed overpriced and kind of pointless. My friend sent me a 50% off code though, which made it $30 for 3 meals for 2, which didn't seem to be terribly different from grocery shopping. We decided to try it for a week.

We've made two out of three meals. 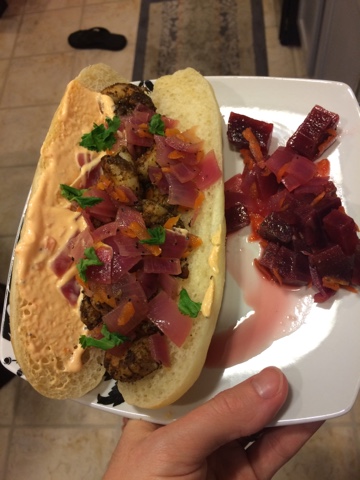 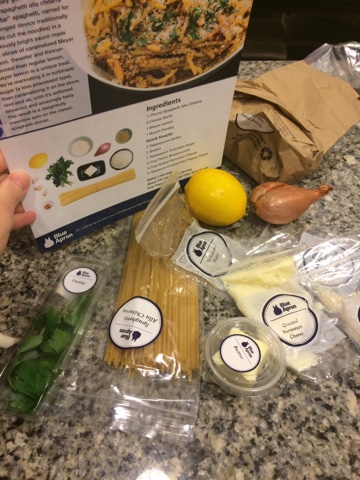 So far, the verdict is: overpriced and kind of pointless. The first dinner was just...fine. Nothing special, nothing crazy delicious. When I told Eric that would have normally cost $20, he almost fell out of his chair, and he's not one to pinch pennies. And at least that was shrimp, which is pricey. The second dinner was delicious, but even at half price, $10 for spaghetti? Normally TWENTY? I think not, especially since many of the pre packaged ingredients were things I normally have on hand anyway - butter, lemon, parmesan, garlic, breadcrumbs. I can get takeout delivered ready to eat for less than $20 a person, and while the meals vary, it's not like straight up spaghetti is such a healthy meal.

I will say, I would consider making that recipe again, but I would just hit up the grocery story. We probably won't try recipe #3 until this weekend because we're so OMG busy.


Let's all pray this stupid fever is gone tomorrow.

Who else has tried one of those subscription meal services? Anyone have a good use for them? I totally get it for actually busy people, like doctors or police officers or single parents, etc, but for someone working typical hours with one kid, in a big city with tons of grocery stores...I don't get it.