Spoiler alert: not nailing it.

This week, I sort of went back to work. I say sort of because it's been so much easier than should be legal, and it's not the real world. I'm only working 8-2, which I'm a big fan of and would love to continue this schedule until retirement (with my full salary, of course). I also have a stay at home parent (Eric), which turns out to be pretty awesome. I only have myself to get ready in the morning. In fact, Eric can even help me, because he doesn't have to get out the door himself. It's amazing. Even being at the whims of a 3 month old, it's so much easier than trying to get everyone up and ready for the day. Lastly, Eric has been bringing Royce to school when the kids leave at noon. Clearly, this is wonderful because I get to see him, and also it means I only have to pump once at work, and then I can just nurse. For those that haven't experienced this, comparing pumping to nursing is approximately equivalent to comparing getting a root canal to taking a Caribbean cruise.

Despite the fact that I just said everything is much easier - that's a relative term. Getting ready in the morning - the struggle was real, even just getting myself ready. I have two versions of "getting ready". One is the first day of school/observation/doing something special after work version. This entails washing my hair, putting on makeup, and wearing of my fancier outfits (but still from Target or Old Navy). Then I have the much more common version of messy bun, no makeup, and crap clothes. In my mind, that version is the cute casual one, but I realized this week that it may have been so in my 20s, but when you roll up in a minivan filled with car seats and goldfish, it's just frumpy mom.

Anyway, obviously with Monday being day 1, it was fancy time. I did the whole count back from the absolute last second you need to be out of the house plan to figure out when I needed to get up, shower, etc. I came up with a plan.

Someone else was not on board with this plan. 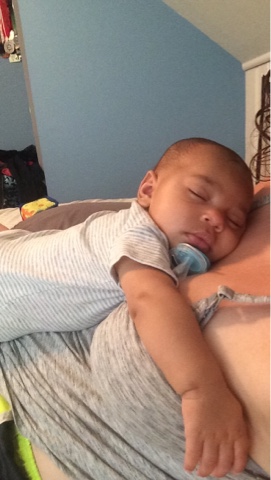 He woke up when I planned to get in the shower, nursed way longer than usual, and then unexpectedly decided he was up for the day. When I went to hand him off to Eric, he was rocking Dalton to sleep after he'd apparently woken up crying. Luckily, Royce was pretty receptive to just hanging out watching me get ready, because he's just wonderful like that. He was even kind enough to spit up on me before I got in the shower. I doubt many babies are that considerate.


After many setbacks, I managed to get out the door, albeit much later than planned. Forseeing this, I had padded the morning with excessive extra time, so I was still at work early. This gets significantly more difficult to accomplish every day.

Another problem I'm facing is baby weight. Sure, it's only been 3 months, and I know the whole 9 on, 9 off idea, I know there's way too much pressure on women to lose the weight right away, and I agree with all that wholeheartedly. Except I live in America, land of "here's your free breast pump now get your fat ass back to work". I'm pretty sure my postpartum wardrobe of elastic waistbands and nursing tanks isn't considered "professional". So while I'm ok-ish with not fitting in to most of my clothes yet, I need something to wear to work. I could go shopping, but I don't want to for reasons included but not limited to:


I have plenty of flowy dresses. While they are quite effective at hiding all the problem areas and still fitting me at various sizes, they don't work when you have to pump 3 times a day. I've heard many workplaces have nice lactation suites, designed to give nursing mothers privacy and comfort. Public schools are not such workplaces. And hey, I get it. My sons will be going through the public school system, and I expect my taxpayer dollars to go towards their education, not towards special milking rooms for teachers. However, in the meantime, that leaves me pumping in closets or empty classrooms, which may or may not have locks, so I'm not trying to completely strip down. Long story short, dresses are off the table.

I've written a lot about some real mundane nonsense. It's obviously not life or death, or anything close, but it's seriously stressful starting a new job and trying to maintain some sense of professionalism when you have like 2 things that fit and you also have to come prepared to essentially be a dairy cow. Not to mention that on top of this, I actually need to do my job and care for my children and maintain a household and all.

I think these faces pretty much sum up my thoughts. 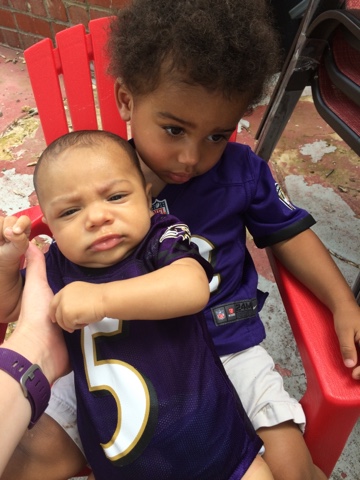