IT'S SPRING BREAK! A week of sleep and relaxation.


I might be up every few hours, but I can sleep in until my child wakes up. It's light out when I wake up. 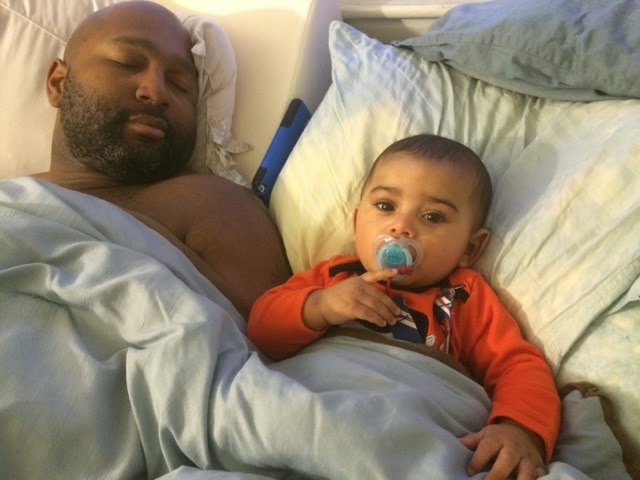 It is beyond amazing. I'm so rested. I've cut down to half my normal amount of caffeine so I'll really feel the jolt when I have to return to real life. I've also been in bed by 9pm every night, if not earlier, because I'm not frantically doing 5 million things so that we can have a snowball's chance in hell to get out of the house on time in the morning. We finally watched TV (the first episode of the Unbreakable Kimmy Shmidt)! I even TOOK A NAP! This is the life, for real. The only saving grace is that the return of Game of Thrones coincides with spring break ending.


Dalton's six month checkup was last week.
Reason #1 I am no longer sure he is my child: he freaking loves the doctor's office. Shots and all.

My little chunky thigh monster is up to 17.8 pounds. I can physically no longer carry his car seat up the three flights of stairs to our apartment. Even if we put him to work with some of the load.

Reason #2: He is indifferent to eating.

He mastered getting the food off the spoon, and he will actually eat, as in the food disappears into his mouth and doesn't return, but he has no interest in it. He isn't interested in watching us eat, either. When I try to hand him food, he just stares at me indignantly. He puts literally everything into his mouth, except actual food. Aside from the fact that it makes me wonder if he was switched at birth, I'm not concerned. I'll keep offering, and I know he'll eat when he's ready. He's almost tripled his birth weight without it so far!

Wednesday night I picked Dalton up from daycare. We came home, and were hanging out playing as usual. He started to seem tired, and then I realized his head was really hot. I didn't think much of it, since he'd gotten vaccines two days before, and sometimes they can cause a fever (although they hadn't for him in the past). I took his temperature. 102.9 degrees.

Yes, I panicked, but less than expected. Eric was on his way home, and the doctor's office was still open and called me back pretty quickly. Apparently for a baby, that temperature is way less of a big deal than my heart rate would indicate. And this kid was still smiling and laughing, even though he was lethargic. A positive attitude while ill: Reason #3 I'm not sure he's my kid. My go to is whining and demanding pity.

The doctor said he had a virus, so we gave him Tylenol and pushed fluids, per the doctor's advice. We obviously couldn't send him to daycare, so I started my spring break a day early. Soon enough, he was back to his normal self.


Friday was our first official day of spring break. I went to Old Navy in the morning and bought jeans. I haven't done that since the weekend of the Wine Glass marathon in 2012.

While I was shopping and at my own checkup, Dalton was coughing and stuffed up. He hadn't nursed much that morning, and only took two ounces from a bottle with Eric. We ended up back at the doctor's office, and Dalton just has a cold. It's the first time he's been sick though, so it's still sad to see, even though he's hanging in there. I'm just glad we are off work so we don't have to chose between blowing through whatever sick time is left after maternity leave, or sending him to daycare since he doesn't have a fever. We are home to alternate comforting him with torturing him with saline spray and the most terrifying item prospective parents will ever see in Babies R Us - the Nose Frida. Selfishly, I'm glad that it fell during my off week. I can gladly wake up to comfort him all night since I don't need sleep to stay home in my pajamas all day!


I'm not religious, and I've never been super into Easter, but I was really excited for it this year. I think since Dalton was so tiny during the only other major gift giving holiday of his life (Christmas), this was the first time he might actually get excited for stuff. Even though the majority of his basket was books, which are clearly mainly for me at this point (but I've been dying to read Is Your Mama a Llama" forever).

Hey, I have one non baby picture! Eric and I made a glorious Easter brunch. It's now an official tradition, and next year we're hoping Dalton will even be awake to join us.

For dinner, we had enchilada casserole, just as Jesus would have wanted. Naturally, Cadbury cream eggs and peeps were for dessert.

What's your game plan while sick? Generally lying on the couch and moaning works for me. Three illnesses ago, I binge watched Orange is the New Black, so that was pretty sweet.