I've been wanting to do a general update post and both boys have now had official weigh ins. Dalton is 34 pounds and Royce is 25! That means if I run with the double stroller, or, more likely, if I pick them both up because meltdowns come in pairs, it's just about 60 pounds of toddler love in my arms.

So far, age 3 has hilariously ridiculous. Dalton is officially in that "kids say the darnest things" phase and Eric and I are constantly in tears laughing. It's probably not worth sharing in a "only a mother finds it funny" sort of way but I will share an example anyway.

It's also worth noting my devotion to cooking has declined a bit. But if Chick-Fil-A is wrong, I don't want to be right. Next thing you'll be telling me it's wrong to "bribe your kids with munchkins" or "send them downstairs with the tablet so I can sleep for another 20 minutes". (Please note these currently only work for 50% of my children but holding out hope we can get to 100% any day now.)

Dalton has also taken to yelling "Alyssa!" over and over during his "naptime". I guess he figured he wasn't getting any answers from "mommy" or "daddy". He has fought sleep since the moment he entered this world. Seriously, one of the first comments we got, after noting his eyelashes were super long, was how alert he was for a newborn.

At Royce's 18 month appointment, I asked the doctor if it was normal that he always seemed really tired when it got close to bedtime/naptime. She looked at me like I was crazy, which, I then realized, was probably true, because what a dumb question. But I swear Dalton has NEVER acted tired in his life, barring a few times when he was really sick. During special occasions he's gone hard with no nap, until like 10pm. So a child not only approaching, but embracing the idea of sleep because he accepts that he's tired, well, that's a new one for me.

Royce is now on the backside of one and, just like his older brother, never stops moving. I can never find any good pictures of him, he's just a blur. And smiling pictures? There's no way. While he's definitely a happy kid, and we get to see his beautiful smile all the time, his typical expression is just pure concentration as he wanders around, touching, looking, and climbing on everything, just trying to figure out this crazy world he lives in.

He's still solidly in that parallel play stage, and when it's just me and him sometimes I feel like I don't know what to do because he is perfectly happy just wandering around, doing his own thing. He'll occasionally bring me something, and, lately, he's wanted a little more affection and begging to be picked up a lot, but mostly, he just wants to explore, preferably from the highest vantage point in the room.

When he's around his brother, it's a different story, because he just wants to do whatever Dalton does. The other day Dalton was having a mini meltdown and laying on his back on the kitchen floor. We were ignoring him and Royce went over and laid down next to him, and he just had the hugest smile on his face and was so proud and excited. Then yesterday, Dalton was helping me unload the dishwasher (please please let this love of household chores continue forever #yeahright). Royce was kind of watching, checking it out, and finally came over and started handing me silverware, again looking just so proud. He always wants to be involved with everything, and he usually struggles to totally figure out what's going on, but he tries!


We got to spend some one on one time together on a sick day when he had an ear infection last week. We bonded over our shared love of pickles in the grocery store while waiting for his antibiotics.

The sibling love is still going strong with these two. The other day I came out of the bathroom and they were just sitting like this. I mean...I can't. 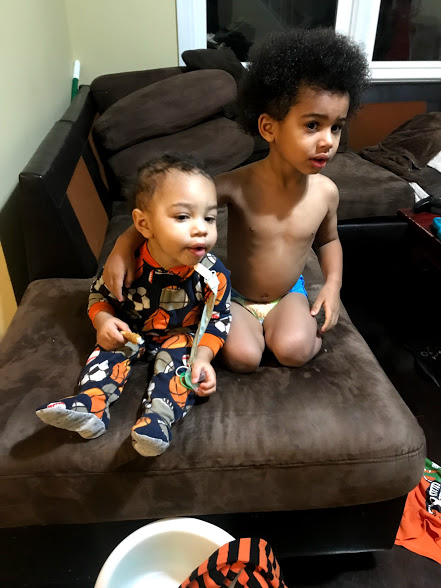 When I try to say Royce can't do something with us because he's too little (ex. swim class) Dalton insists he's big, and says he misses him when he's napping. They constantly gravitate to each other and Dalton is the only person that Royce truly "plays" with and his smiles when he does are to die for. Whenever one of them is crying, the other one will bring over some sort of comfort item.

They both loved being involved in kitchen prep for Thanksgiving, sometimes being more helpful than others. Like when I tried to make apple pie and they both just started devouring sugar covered apples. 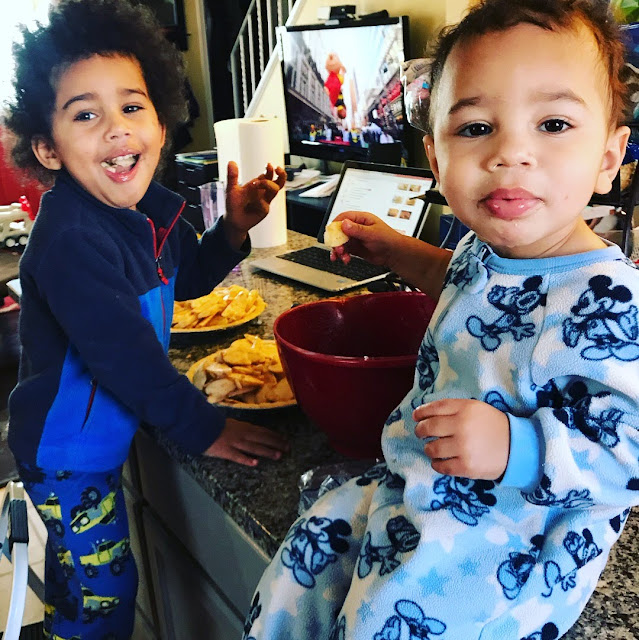 We had our traditional fried turkey. 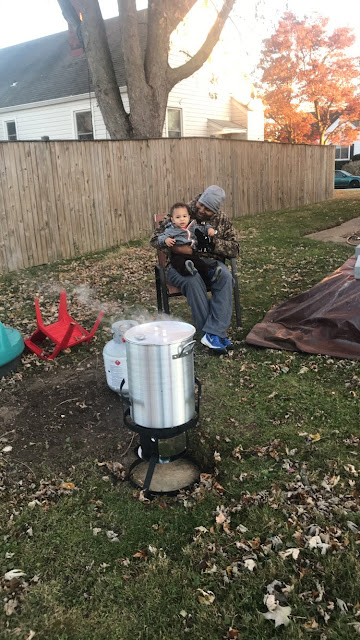 It was just the four of us, so we had a simple spread. Turkey, mac and cheese, stuffing, cranberry sauce, and mashed potatoes.

And obviously, apple pie a la mode for dessert. Then we attempted, and I believe, nailed the family self timer picture. 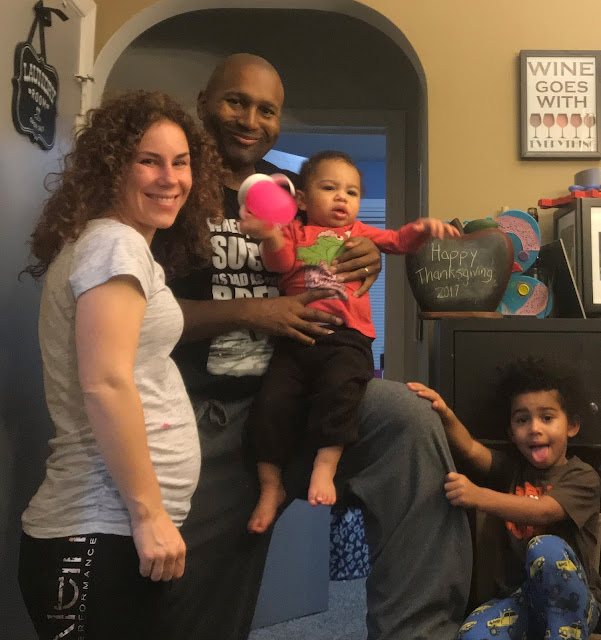 We have plenty of seating, but there's no seating as good as Dad after a huge meal. 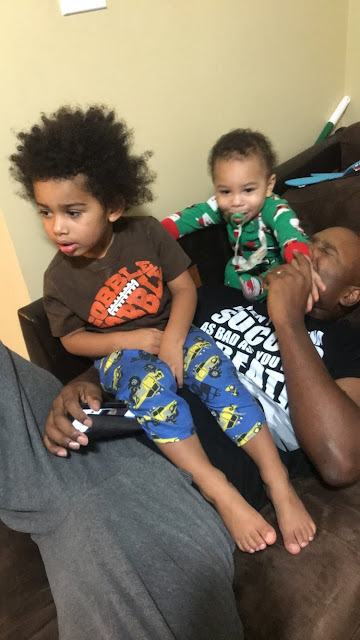 I was way too lazy for Black Friday shopping, and anyway I usually don't get my ducks even in the same pond to buy gifts until at least Christmas Eve. However, I was adamant we had to set up the tree. Dalton was SO excited and kept saying "It's just perfect!". He loved putting the ornaments on almost as much as Royce loved taking them off and throwing them. 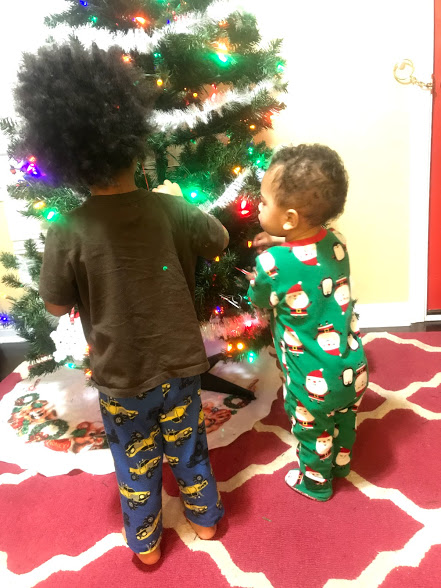 And that's what's going on with us! Personally I'm psyched it's the most wonderful time of the year and I can (continue to) play my Christmas music without being judged now.