I've run this race a few times in the past, and it's one of my favorites. Tiny, only around 100 runners this year, shaded, flat, quiet - you can't go wrong. It's point to point as well. You show up at a shopping center and park your car. This is the finish. Fancy coach buses with nice heated bathrooms bring you 20 miles away, nearly to Pennsylvania. You walk about half a mile (quite a warm up) to the start line and then run back! The whole thing is on a rails to trails trail, so there are no turns, streets, cars, spectators - it's really a whole lot of running on packed dirt, through trees and that's about it. My favorite.

I arrived just before 7, found my friends, and got on the bus. We tried not to talk too much on the bus. Gotta save the stories for the run!

It had been a little hotter than usual the previous week and extremely humid. We were relieved to find that we were actually chilly before the race started. 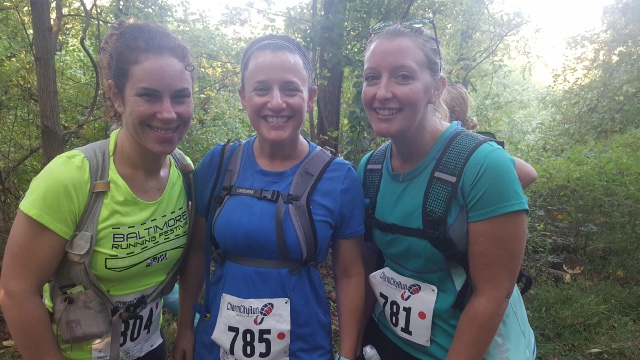 At 8am, the race director yelled something like "GO!" and off we went. It bottle necks a bit with 100+ runners on a fairly narrow trail, but spreads out almost immediately.

I felt a bit rough the first maybe 5 miles, but the good thing about a long race like this is there's plenty of time to turn things around. I think I was finally warmed up after that. I was actually kind of shocked when we hit mile 12, I wouldn't exactly say it flew by, but it definitely didn't feel like I'd just run 12 miles. It felt like no big deal. Shocking. Especially since I had so many training runs when I felt like getting to 12 was nearly impossible. Another exciting thing was the 12 mile mark has actual bathrooms, like ones that flush and have running water in the sinks. We were a bit spoiled for this race.

Miles 12-15 were a struggle. Definitely my low point mentally. It's always that time where I've run really far, but still have a loooong way to go that gets me! We started to get into old stories like how we met our husbands to push through.

After a walk/final Gu break at mile 15 (I had three throughout the race, miles 5, 10, 15), I felt a lot better, and improved further after we got to the portopotties around mile 17-18. This race can mess with your head because after 19 miles of flat, shaded trail, the final mile is on the streets, in the sun, and up a sizable hill. It was over 80 degrees by that point and humid so the last mile is pretty dumb. Although I weirdly felt good then and it didn't really bother me. Maybe I psyched myself up for it enough? 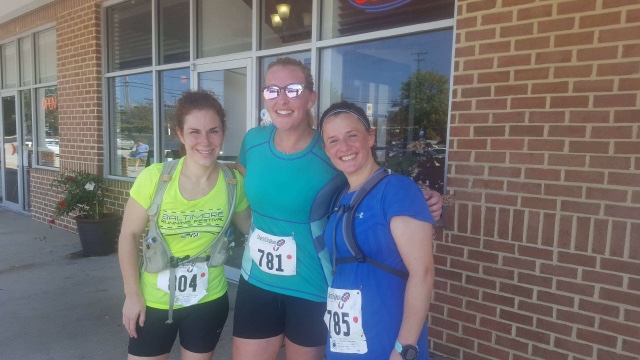 One of my favorite things about this race is it ends at Dunkin Donuts. It's weird, my stomach can be totally off after a race, food sounds disgusting, and yet I can still chug an iced coffee.

We did some stretching in the parking lot, as one does. Jackie brought her fancy vibrating foam roller, it's been a life saver during this training cycle! Then I headed home to relieve my poor husband, who had been bartending until the wee hours the night before and then got up with the kids for my race. He's kind of awesome.

I felt a little rough directly after, but I laid down a little bit while the kids napped and that seemed to do the trick and then I felt pretty good! I took the kids to our favorite place solo and bought a week's worth of groceries that night, so I consider that success.

Upon posting that, I realized I never ate those potato chips. Where did they go?

NCR 20 miler - official time 3:58:30. Yep, not breaking any speed records. We took it easy and used walk breaks liberally. But I made it and now I'm "ready" to do a marathon in two weeks. Maybe.