I'm in the second trimester of my pregnancy! 14 weeks!

Yeah, I got the memo you aren't supposed to have tons of apps and know the exact number of days pregnant you are with the third pregnancy. But I don't subscribe to that. Being pregnant is still super exciting and I like to obsess over it! I mean, it's a big deal! I'm growing a human. I don't think I could ever get over that no matter how many times I do it.


Being out of the first trimester has never been such a huge relief. As I said in my previous pregnancy post, I struggled the most I ever have with anxiety about losing the baby. And I still get scared - does anyone ever relax until the baby is in their arms? But at this point the odds are that the baby will be in my arms this summer!

The morning sickness is so much better. I'll occasionally feel nauseous or have nights like Monday when the only thing I could stomach for dinner was white rice, but they are becoming fewer and further between. A lot of days I feel almost normal and it's amazing. My diet has been worse than most college freshmen. After the slurpee period, I went through a period where I couldn't stop eating Taco Bell bean burritos. Yep, weirdly specific. I hadn't had Taco Bell in ten years prior to this pregnancy and now I don't even want to think about it. But for awhile there, I was going multiple times a week. There was a lot of chips, pizza, crackers, and juice too. You know how some people are all like "oh all I craved was fruit!". MUST BE NICE FOR YOU. I craved everything that could make me the fattest ever. Except sweets. My consumption of dessert is WAY down. Like I've eaten white rice with soy sauce FOR DESSERT. I don't even know me.

Now I can frequently be seen eating pickles in my classroom while teaching. Pregnancy cravings are so weird and I never had any like this (cue everyone saying ooooooh it must be a girl because symptoms totally predict sex). I had foods that sounds good and I wanted to eat them, like in normal life. But this is different. The audiobook I was listening to mentioned Minestrone soup and I drove straight to the grocery store and bought some and my mouth was watering the whole way home and I couldn't think about anything else until I had that soup. It's just so random and so specific and once I think about that food I can't think about anything else until I have it (most inconvenient at work). I drive around with pickles in the passenger seat. Not even joking.


Aside from the fetus, my outside children continue to grow and develop as well. Royce continues to shock me as he gradually becomes less and less of a confused destructive caveman and more and more into a real actual human being. Just a few months ago, like September/October, we had an important milestone. I introduced him to the wonder of Chick Fil A sauce. I wish I had a picture because he essentially bathed his entire upper half in it. He quickly abandoned his dinner to just use his hand to shovel it into his mouth, as we all would like to do, but is only socially acceptable for a one year old (and barely at that). He was covered with it.

Last night, he was neatly dipping his nuggets into the sauce LIKE A REGULAR PERSON WOULD DO. He barely even made a mess. Sure, he also dipped his apples into it but there's no accounting for taste. Also sure, maybe this indicates an over-reliance on fast food for our family, but I've already discussed this in previous posts and anyway, Chick Fil A is not on the same level as other fast foods.


Another pretty cool thing with Royce is he understands so much now. He's not talking, so it's easy to overlook this, but I'm noticing more and more how much he's responding to whatever I'm saying. I can actually calm him with my words now! The vast majority of the time, of course that doesn't work because he's a toddler, but it's starting to happen. For example, if I'm buckling him into his car seat and he's fussing for a toy he sees, he will often actually stop fussing and wait if I tell him I'll give him the toy after I buckle him in. That's amazing. He's turned from a helpless newborn that has no choice but to cry for every need to an real human being who can dip Chick Fil A nuggets properly and listen and react to what people are saying. Yes, every single human being on earth also has made this transformation in their lives, but much like pregnancy, it's still incredible when it's your child and your experience (see above).

Royce is truly just fearless too. Another Chick Fil A milestone, he was climbing to the top of the play place and going down the big, fast slide. At 19 months. Dalton didn't do that until he was 3, and he's known for being a daredevil climber.


Dalton just continues to amaze me with his sweet and caring nature. It's weird too, because he's very much like me in many ways but I'm not exactly known for being a touchy feely warm and loving type. Yesterday, I won't mention where we were but see above, a bunch of parents/kids were helpfully saying things like "watch out for the baby!", meaning Royce, in the playplace. Dalton went up to him, put his hand on his shoulder, and and quietly said "you're a big boy". I mean, melt my heart. Another time I took Royce out briefly because he was fussing over something and Dalton came running out to me. "Royce is ok, right?". He's just such a good big brother and so, so funny.


They both "know" about the baby but I put that in quotes because who really knows how much Royce understands, and Dalton is really a live in the moment kind of guy so at this point even Christmas is kind of far away for him to be getting worked up about. Neither of them are much interested in babies or baby dolls or anything. I've tried to show Dalton the 3D image of the baby on my app but he just asks to see the picture of the bunk beds I told him he and Royce would be sharing when the baby arrives. For him, that's by far more exciting (and who can blame a three year old for that thinking, really). I'm not concerned because Dalton never showed any interest in babies last time but clearly it worked out fine.

Back to the baby, one reason I really like my doctor is she's super blunt and just came out and said what everyone is likely thinking. She walked into my first appointment and the first words out of her mouth were "so, was this planned?". I'd definitely been clear with her when we discussed birth control options last winter that another baby was hopefully in the cards for us, but, I'm not offended. I know two kids in less than two years puts me in the "woah, you'll have your hands full!", minorly crazy camp. 3 kids in 4 years puts me in the much smaller "this bitch has seriously lost her damn mind" group.

I probably will have my moments where I am losing my mind, but, I love having my boys close together and we really didn't want a big gap before another baby. This is a decision where I can totally understand the other side of waiting much longer in between children. Unlike, for example, the other side of the epidural decision. No offense to anyone, but I just DON'T get why anyone would just want all that pain. But anyway, Dalton is now at the age where it's much more common to add another child to your family, and, I get it. He's very independent, out of diapers, out of the crib, can do a lot of things for himself, and he's out of the "I don't know what this thing is so let me lick it/bite it/throw it and figure it out" phase. I can get him out of the van and tell him to walk to the sidewalk and wait while I get Royce out and be 99% confident he will not run into traffic because he understands it's dangerous. (I feel 100% but nothing in parenting is ever 100%.) I can definitely see how adding a newborn with just one child at this age would be desirable, it's just not for us. I much prefer to just keep rolling with the diapers/night wakeups/constant, CONSTANT supervision. It's insanity and chaos and constant crumbs and mess and crying, but honestly I think the two of us handle the chaos pretty well and it doesn't bother me (much).

I don't remember ever being this eager to just HAVE THE BABY. I was so nervous about the changes the last two times that it was maybe equal parts excitement and nervousness. Now, sure, I'm nervous about how I will handle 3 kids but I have this overwhelming impatience that I don't remember having for anything since I was a little kid where I just cannot wait to hold this baby. I think I would truly just go ahead and fast forward to June if I could, I just want to meet this little person so bad.

I had some sort of foolish thoughts that since I can just have a scheduled c section with this one, I wouldn't need to have 400 contingency plans for going in to labor. Um, wrong. When I met with my doctor, I realized all a scheduled c-section is a spot blocked out on my doctor's calendar. If there's one thing I've learned about babies, it's that they DGAF about how you want to birth them. The earliest they will schedule a c-section is 39 weeks 2 days, which is tentatively the plan. But Royce came at exactly 39 weeks so....I kind of feel like a third time laboring followed by a c-section is in my future. Womp womp. I'm over these contractions, but, I know carrying a baby to term is a blessing and I need to focus on hoping I'm lucky enough to do so even if it means more stupid contractions for me. If I do go early, it does meet my earlier desire of meeting the baby earlier! So, every friend I have within 30 miles of my house, you are officially on call in late May/June. 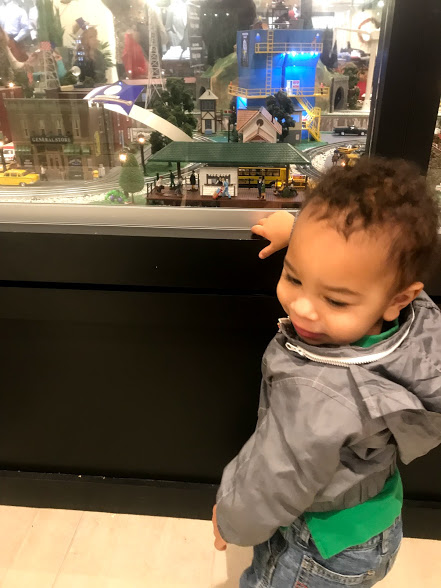 Breakfast with Santa where they actually got near Santa! Not that we got a decent pic, but still. 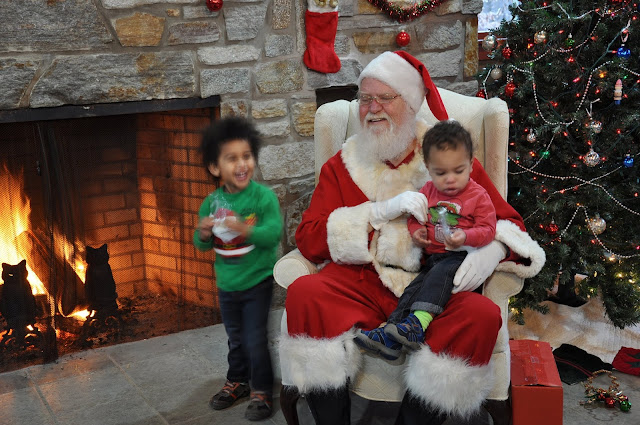 Dalton showing off his breakfast with Santa craft. He was so proud! 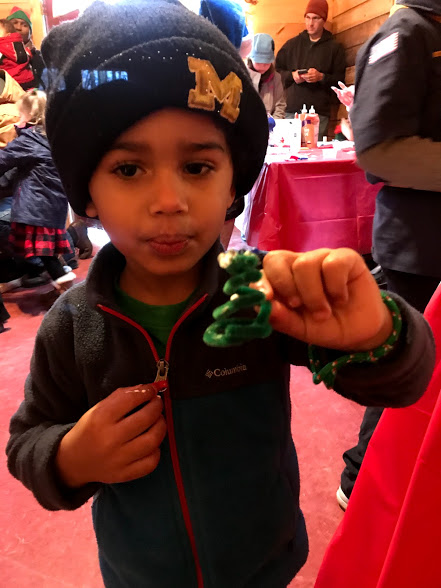 That's my latest stream of consciousness. I have to get everything on my mind out because who knows when I'll get around to blogging next.