The Best Kind of Day

I think Eric and I are a perfect example of opposites attract. He is more relaxed, mellow, and go with the flow, whereas I am more type A, go-go-go personality. Sometimes on weekends I force him out of the house for random activities - hiking, museums, minigolf, which he ends up having a great time at. And sometimes, like yesterday, he forces me to take it easy. After putting up the Christmas tree, we sat down on the couch to catch up on our overloaded DVR (we almost never watch shows the night they are on). Of course, I got into my usual "I feel guilty for laying around, I need to get up and do something productive, ok one more then I'm going to the gym" monologue. Eric convinced me to just relax and told me to forget all that and just have fun with him. So, we declared it a "no - leaving - the - house day", and it was great. Our DVR was emptied, we played twister and Uno (and I won both, BTW), danced to Christmas music, figured out a dessert we could make using only ingredients already in the kitchen, and watched a movie on Netflix. I thought I would get antsy and feel the need to go somewhere, anywhere, but I never did. I think the mental break from the world was exactly what I needed. Now, I need to find a way that every weekend can be four days, so I have time to see friends, do chores, and still take an entire day to do absolutely nothing.

My first grown up Christmas tree - neither of us have ever had our own before! 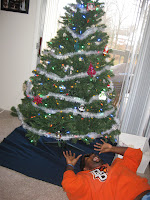