We got to our room in the Mother/Baby unit late Friday night after Remington's birth.

My mom and stepdad arrived from upstate NY (about 400 miles away) around 1am and were excited to hear the sex and name announcement. 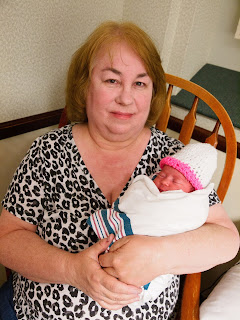 We hung out until 2am or so. I was exhausted but knew from experience there's no sleeping the night after a c-section, between the itching from the epidural, the calf sleeves that constantly expand and contract, and overall grogginess from drugs combined with adrenaline from HAVING A BABY. Remi nursed from between 2-3am and I just found this gorgeous picture on my phone 3 weeks later. Basically Kate Middleton here. 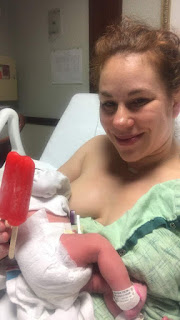 We sent her to the nursery from 3-5 am so Eric could sleep and I could lay in bed and pretend like I understood the book I was "reading" (The Golden State Killer). The nurse brought her back to eat around 5am and Eric was dead to the world and I was like STARBUCKS IS OPEN OFF YOU GO.

Obviously the big event on the first day of Remington's life was meeting her big brothers!


We are so grateful to our friends Carrie and Derek for watching the boys the night Remington was born, and to my mom and stepdad for driving down and taking them the next night. After that, my parents had to leave Sunday to get back for work Monday (no Memorial Day holiday for my mom). Eric went home Sunday afternoon, so Remi and I were on our own the last two nights of our four night hospital stay. I would have been appalled at the mere thought of that my first time through, but with the third baby, it felt like a vacation to just lay in bed and watch movies with her. I almost felt guilty that all I had to do was push a button and nurses brought me ice water or took my baby to the nursery for me to sleep while Eric was at home chasing the boys around, but, I did just have surgery to give him a child, so.

Tuesday morning, Eric took the boys to daycare and then came to pick us up and go home.

Remi was not impressed.

And thus began our life as a family of five! 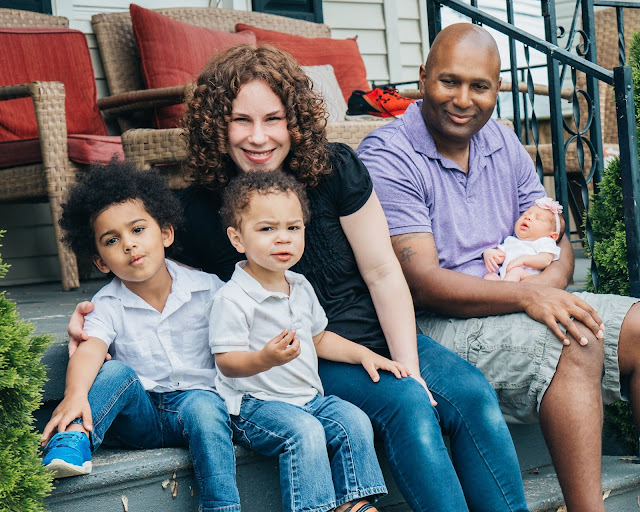 Not to be outdone by little things like a new baby or a newly aquired middle child status, Royce made sure to keep us on our toes. On Remi's very first day of life, my mom had told Dalton that they would go to the hospital to meet the baby once Royce was up from his nap. Dalton peered down the hallway where their bedrooms are and announced "he's up!". My stepfather asked "How do you know?" and before Dalton could respond, Royce came flying down the hall on his scooter! Prior to that, he had climbed in and out of his crib a handful of times while we were in there playing, but he had never exited on his own, and he had never opened the door by himself, at least that I was aware of - I didn't even think he could reach well enough to open it! So much for our plan to transition him to a bed in late fall when it's time for Remi to take over the crib. I don't even know why in 3.75 years of parenting we still come up with these "plans".

We kept him in the crib another week, since we figured maybe we should wait until we got home from the hospital at least. When Remi was just 9 days old, the boys helped Eric build a second toddler bed. 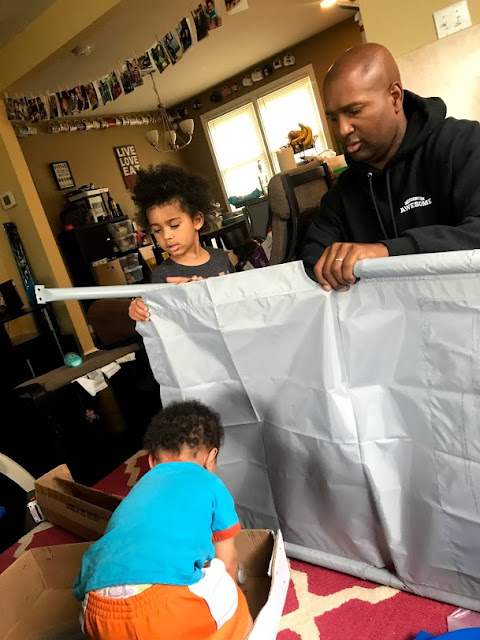 We had foolishly "planned" to get them bunkbeds, but we didn't want to buy those on the fly. I found a toddler bed in a local mom group, being sold brand new in box for $30 just a few miles from our house so...for the moment I have zero kids in cribs!

Doing the big crib to bed transition with a one week old just didn't seem reckless enough. After 3 or 4 days of Royce being in his bed, we moved his bed into Dalton's room, because why not? Honestly it was Eric's idea to jump in with both feet (we always planned to have the boys share a room eventually) and I was like whatever I'll be on baby duty so you do you, boo.

Speaking of sleep, that's the number one question it seems people ask when you have a new baby. I know I'm just as guilty with asking about this, too. Everyone wants to know how sleep is, and I would say it's just about as expected for having a 3.5 week old baby! The first 3 weeks were a total blur. Everyone always wants to know how long are the sleep stretches? And keep pressing you even if you say you don't know. With Remi and Royce I was like WHAT ARE SLEEP STRETCHES. 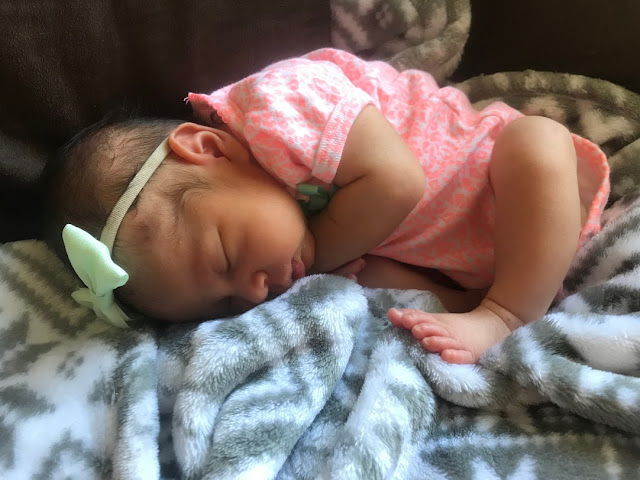 It was an all night cycle of fuss, latch, start to eat, fall back asleep, go back in bed, baby realizes it's alone in a bed, baby gets pissed, begin cycle again, repeat 10-6 am. With a few "stretches" thrown in where I wake up with her in bed with me and realize we both actually slept for some amount of time (don't worry I researched safe bedsharing and follow all the guidelines). Possibly a few diaper changes thrown in as well. I woke up each morning feeling like I'd been on a black out bender with no clue what actually happened, only vague ideas.

Once she hit 3 weeks, I started to see a few of these so called "sleep stretches". She's started to consolidate eating and sleeping into separate events. She's still, you know, a brand new baby, so the nights are still filled with swaddling/diaper changes/crying and all the usual stuff of babies being babies. While it's certainly stressful at 2am when I just desperately want to sleep, it's so much easier the third time around. I don't have the added anxiety of being positive I'll never sleep again, and agonizing over what I did wrong. I can just be like "well this sucks" in the moment, and then forget about it over strong coffee in the light of day. A wise perspective I certainly did not have when Dalton was born and I was 100% positive every cry was a result of something I had screwed up.

The boys love to come see her after they wake up each morning, and take turns kissing and holding her while I mainline black cold brew. It's pretty much the best. And I maintain my position that while having a newborn is certainly exhausting, nothing is more tiring than being pregnant with a toddler (or if there is something, I'm not interested in it). 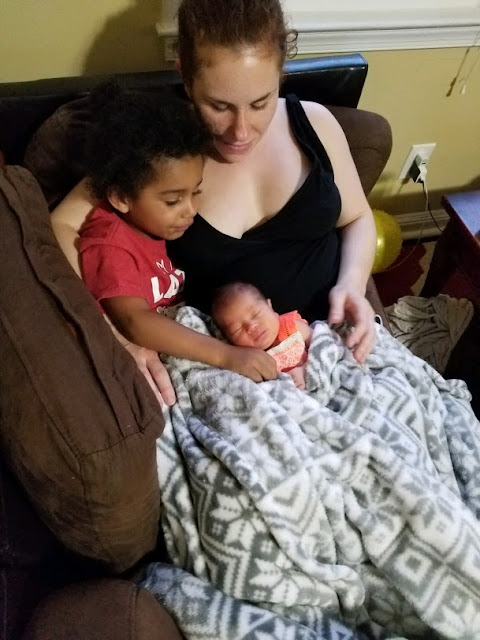 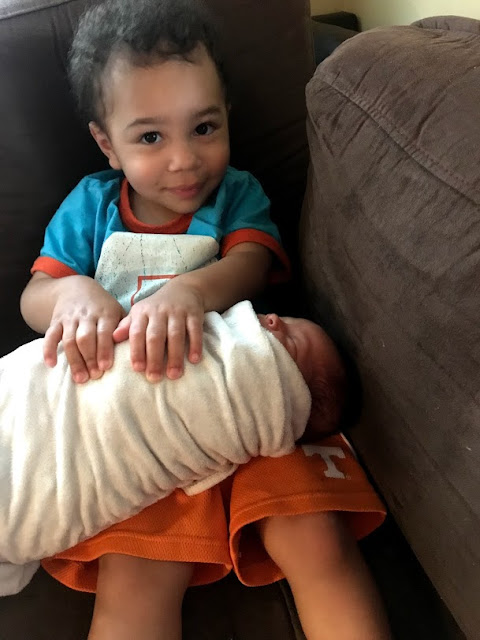 Other random stuff: breastfeeding is going well! Remi was back at her birth weight within a week of life. She was born at 5lbs 11oz and weighed 6lbs 1 oz at 13 days old. She's still a teeny little peanut and drowning in most newborn clothes, the two preemie outfits she's tried have fit perfectly though. I love, love, love dressing her and girl clothes are more fun than I ever could have expected. I loved dressing the boys as babies too, but, I have to admit that girl clothes are just even cuter. 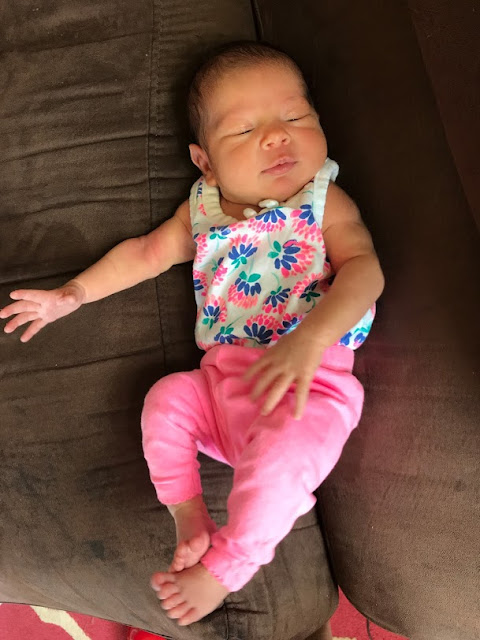 I have the Haakaa pump this time around. It's a silicone hand pump that you use on the non nursing side to collect the leakage and it suctions to your breast. It's been amazing to just reduce the engorgement enough to be comfortable, but not enough to tell my body to produce more milk like actual pumping would.

C-section recovery has been a bit rough. I thought that since the second recovery was easier than the first, the third would be a walk in the park. Apparently with all the scar tissue built up by this point, that's not the case. I've taken it very easy and I'm great at just laying around and binge watching shows when it's just me and Remi. But it's pretty hard to resist playing with these two adorable little boys, especially when Dalton does things like look up so sweetly at me and say "you can come on our walk with us mommy". Royce is nearly double my lifting limit of 15lbs, but a few times I've picked him up unintentionally - it's just such an ingrained habit! Eric is great about playing with them, dressing them, essentially doing everything with them, it's just that while I'm trying I'm not quite as great about not doing things. Having them still in daycare helps a lot though. There's been a few times I've been solo with all 3 of them while he had to work at the bar or had to go into school and everyone survived. So that's a super long explanation of why I'm still moving pretty slowly and having abdominal pain.


That post only took me about 3 weeks to write! I was hoping to better keep up with blogging my experiences, but with the third baby I'm all too aware of how quickly it passes and how soon she won't be interested in just snuggling in my arms. Baby > blogging.