Christmas 2017 felt like I finally got the Christmas I'd been dreaming of since becoming a parent. We decided that once we had kids, we would start doing Christmas Eve/morning in our own home. I realized the long term advantages of that, but our inaugural parent Christmas was with a barely 3 month old in a large, yet kind of crappy apartment.

While it was fun to take cute pictures, 3 month olds don't really recognize holidays and continue with their typical lifestyle of eat/poop/sleep. 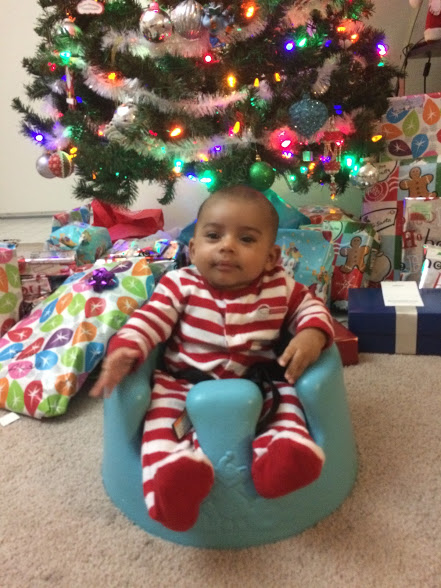 They don't really do anything fun like open gifts or put cookies out for Santa, so things really didn't feel very Christmasy to me.

It took longer than expected to turn things around, because it turns out 1 and 2 year olds don't really GAF about holidays either, or at least in our case.

So this was FINALLY the year of Christmas excitement! Dalton "got" the idea of Santa, loved doing all the holiday activities like putting up the tree, a special "milk and cookies" event at a local children's museum, leaving cookies out for Santa, etc.

We kicked off the glorious break from work hosting our mom group Secret Santa exchange. The usual chaos ensued along with the usual hilarity of trying to get all 7 children looking at the camera for a picture.

Christmas Eve morning, Dalton helped me make, shape, and decorate sugar cookies for Santa. He was so excited and so skilled at carefully rolling out the dough each time.


But when a 1 and 3 year old are doing the decorating, appearance isn't really all that important.

We did our usual appetizers for Christmas Eve dinner while watching Elf. Everyone opened a gift as well as Christmas pajamas.

Christmas morning was really fun. Dalton mainly seemed confused at first that Santa had come and brought him a tool bench. Then, in typical 3 year old fashion, he wanted to just play with each gift instead of continue to open them. But we had nowhere to be, so, why not? 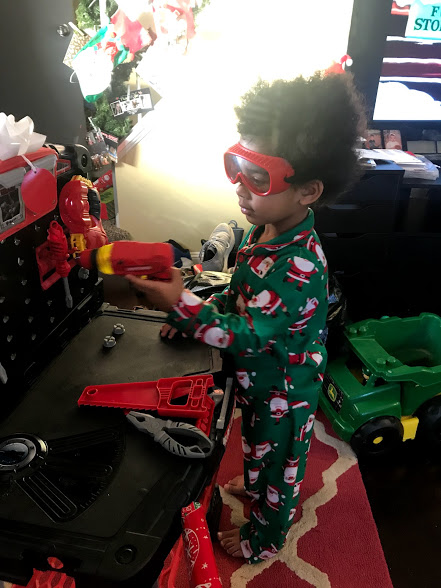 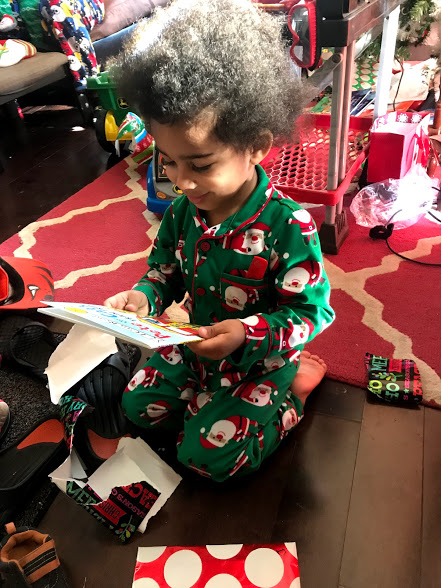 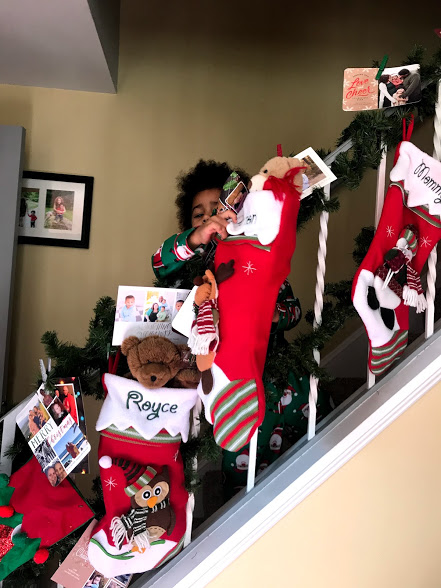 I didn't think Royce would get the hang of things based on Dalton's one year old Christmas, but he does what his brother does! 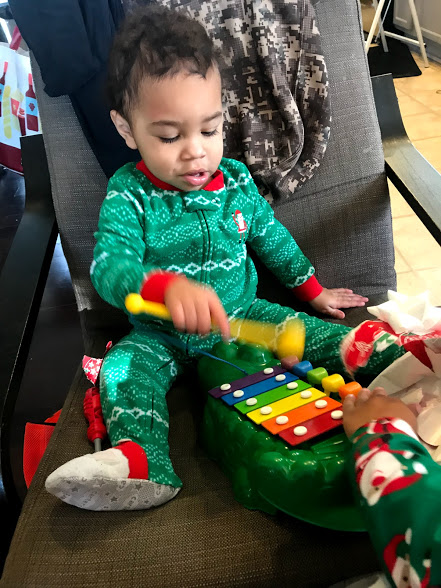 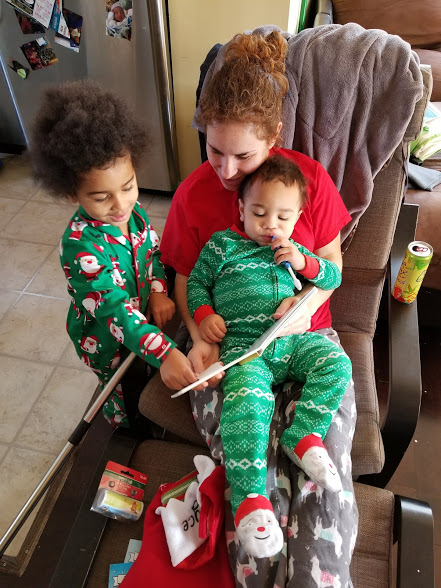 We had this great plan to get Royce to give up the pacifier, with plenty of time to spare before the new baby arrives. We started right away, on Christmas. 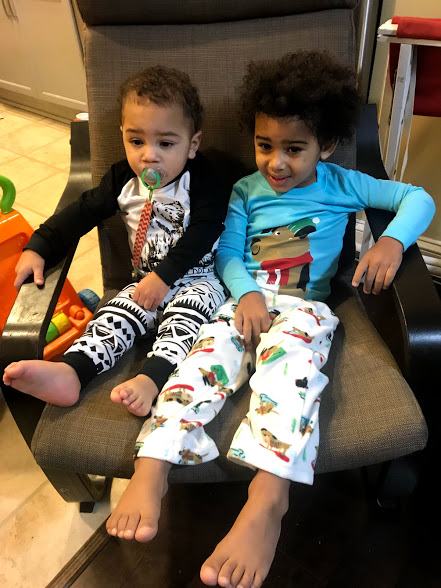 Yeah....good thing it took me 3 more weeks to post this. We gave in and he got it back last night. The first week was fine, but then when he returned to daycare, sleep became a nightmare. He used to go through his bedtime routine, happy as a clam, give him a kiss goodnight and didn't see him again until the morning. Suddenly, as soon as we finished reading his book it would be kicking, flailing, running away, throwing himself to the floor, and hysterical screaming as soon as he was in the crib. It worked for awhile to lay down with him, but then that stopped working. Plus, he was up in the middle of the night doing the same stuff (thank god Eric dealt with that). Eventually we got to the point where laying with him didn't work, cry it out didn't work, he just wasn't sleeping. Eric said he won, and was getting the pacifier back. I honestly felt totally dumb because that hadn't even occurred to me as a solution.

He started tensing up and pawing at the door after his book last night. As soon as I gave him the pacifier, his body totally relaxed and he turned off the light like the good old days. Totally different child. So whatever, he can have the pacifier until middle school. How much can braces really cost anyway? It's not the first or last time I'll be bested by a one year old.

I comforted myself with the reminder that when Dalton was a baby, my friend also had a baby, one week younger. The two of us decided to have our babies share a dorm room and secretly pay someone to swaddle them every night because we were positive they would never sleep without one. Point being, both our kids now sleep without the swaddle, so even if it seems like kids will never get to a certain point, they will. Someday.

In other news, I had stomach flu this week and having that while pregnant is about as fun as it sounds. 0/10, would not recommend. Royce threw up on the way home from daycare Friday. All over his car seat. In sub zero temperatures. That was the beginning of the end. Then he continued life in his happy go lucky not gonna sleep fashion, not bothered at all. He was kind enough to give it to me on Sunday. It had me contemplating death. I'll never understand how illness can barely slow down a kid but completely take down an adult.

By Tuesday, I was able to keep liquids down somewhat but still pretty dehydrated. My OB said I might have to go to the ER for fluids (not as dramatic as it seems, it's pretty easy to get to that point while pregnant). I was completely panicking because it was around 1pm, and I had to pick the kids up by 5:30pm and Eric was coaching a basketball game. In my luckily (surprisingly, if you know my kids) limited ER experience, I would be there for quite a long time so....that kind of screwed us. A non local friend asked if there was anyone else who could pick them up and I was like....uhhhhh.....not really. Willing? Yes. But most of my friends have their own child and most cars don't fit 3 car seats, not to mention the confusing of getting and moving car seats in, again, sub zero icy temps....so...yeah. I was like oh maybe this is why people don't live in different states from their family. If it wasn't for the whole pesky needing to be employed thing, I definitely wouldn't.

Anyway, I was able to hydrate in my preferred fashion, in bed, with Netflix and not at the ER, and got the kids, and it was all fine. Now I'm able to be back at work and provide the absolute lowest quality minimal parenting in the evenings (Eric had games all week) and sort of be a human. I'm mainly annoyed because I've still been feeling nauseous and gross and on a bread and cracker and juice only diet and don't want to feed my kids because food disgusts me so much. AKA - repeating the morning sickness from the ENTIRE first + trimester that I had FINALLY started to move past. Sometimes I wonder if I'm more excited to meet the baby or just be able to eat normally again.

Pregnancy wise, I'll be 19 weeks tomorrow! Almost halfway! It still feels like this pregnancy is taking forever and I have a constant countdown in my head of time left (20 weeks and 3 days). I'm really, really impatient to get it over with and meet the baby. I think I've mentioned that. I'm hoping once I start feeling movement and maybe even return to eating more than just bagels and toast I'll enjoy the pregnant part a little more. It's not that I don't like it...it's just that I am seeing it as a means to an end, and I really, really, want to get to the end. Remind me of that when things are completely chaotic and insane and I'm barely surviving on enough coffee to take down a small horse. But I still can't wait.