My friend invited us to this amazing lake house with a private dock for Friday happy hour. Dalton has never been in open water, only pools, so I was really excited. He loved it, and had a fantastic time splashing around.


I was a little nervous climbing down the ladder to get into the water while wearing him. I should have practiced first, because I jumped off at the end instead of just carefully stepping down the whole way. I slammed my elbow into the rung, with my entire body weight AND Dalton's. It hurt.

For the raft, I had to call in reinforcements.

We went to my friend's housewarming party Saturday night. Everyone was freaking out when Dalton started eating chips off her deck (um, he put them there to begin with). We were like....not poison, not a choking hazard. It's fine.

3. My days of sleeping in are done and I can't even blame the baby.

Times I woke up this weekend: 5am, 5:40am, 6am (we have today off from work). Times Dalton woke up: 7am or later. I just COULD NOT go back to sleep. It was so sad. Last night I even went out for my friend's birthday, and stayed out until nearly 11pm! Wakeup time the next morning: 6.

I have, probably too extensively, documented my long suffering journey to breastfeed for a year on this blog. Finally, when this school year began, and Dalton was nearly 11 months old, I knew I had made it. I had enough in the freezer to stop pumping and just send frozen milk to daycare, and the pump was where all my problems stemmed from (well, most). I was so excited at the thought of nursing him on his first birthday, after I'd spent so many rough days thinking there was no way we would get there.

Just 11 days before his birthday, Dalton decided he was done. We were down to only nursing when he woke up in the morning, and on Saturday, he refused that. I tried again in the afternoon, and the next morning, but he's done. He chugged 6 oz of breast milk from a sippy cup in about 3 minutes instead. I'm still rounding up and counting it as a year, even though that does feel like cheating. He will continue to get breast milk in a cup even past a year (until it runs out).

It gives me all the feelings. The past 2 months were really difficult, full of top teeth and clogged ducts. Not having the stress of pumping at work has felt like the world's biggest weight has been lifted. But I'm still sad. I loved our quiet times nursing.

5. Don't try out blackout shades the morning of a birthday party with a bouncy castle.

I wouldn't say naptimes have been bad in our house, but there's always room for improvement. We bought blackout curtains from groupon while I was pregnant. They did not black anything out. I got some blackout shades that were highly rated on Amazon this week, and they definitely darkened the room quite a bit.

The first time we used them was Sunday morning. Dalton took a practically unprecedented three hour nap, right through a 3rd birthday party we had planned to attend with a bouncy castle. I didn't even know about the bouncy castle, and we got there as it was winding down so that we could at least say Happy Birthday and drop off the gift. We still bounced, but it wasn't the same.


6. Likes and dislikes can be inherited.

After the bouncy castle, we met our good friends at a farm.

The boys loved the hayride. 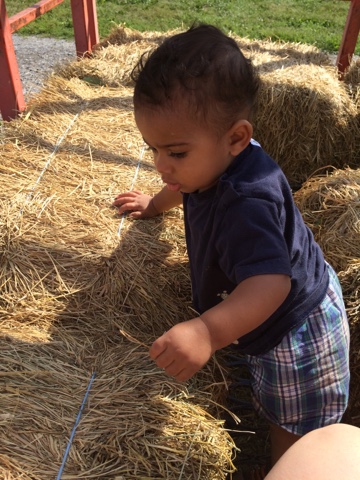 But while Nathan was happily feeding the goats, my child was a little more...hesitant. 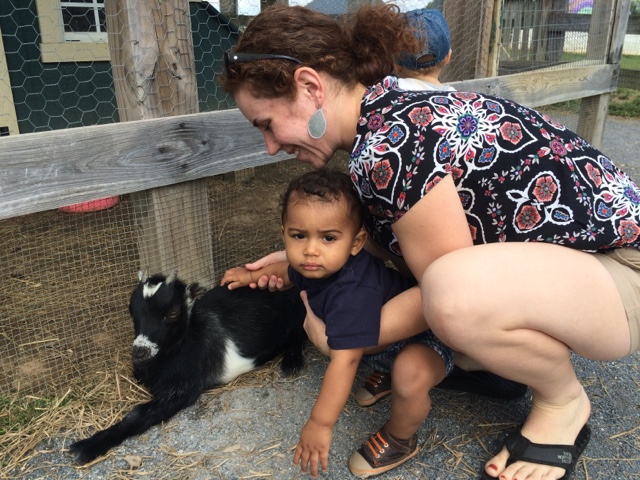 Anyone who knows me knows I hate all living creatures other than humans (and even those are touch and go). I really didn't want to pass this on. Dalton's daycare has two dogs, so that starting from 3 months old he has been exposed daily to pets. But I guess there's no arguing with biology. The picture above says it all. I can't stop laughing at it.


What lesson did you learn this weekend?

Any fellow animal haters or non-germophobes out there?