Best day of my life


Welcome to the best day of my life. Here's what happened.

First of all, I actually got up and ran. The distance isn't important. Don't worry about that. The point is, I was on the treadmill, moving, prior to sunrise.

Then Eric called me when I was on my way to work. My first reaction was panic, because the last time that happened, it was from an ambulance, after his car was totaled, with Dalton in tow. I heard him say something about an ear infection, so I assumed Dalton needed to go to the doctor. But finally I calmed down enough to understand that he was telling me that Dalton's daycare provider had an ear infection, he was fine, and Dalton just needed to be picked up before 11 (she had help until then).

It was Eric's first day of basketball tryouts (coaching, not playing), which is a big deal, so I stepped up and took one for the team. Left work a half day on a beautiful, unseasonably warm fall day to spend the afternoon with my son. We went to the playground, had lunch together, then he took a nap and I actually cleaned and did laundry! Then we went to Aldi and got all our Thanksgiving non-perishables. (I'm not sponsored, I just like dirt cheap groceries so I can save my money for daycare and have more kids.) It. Was. Glorious. I was seriously so happy to have an extra 5-6 hours with my little man.

I realize this makes me sound like a total asshole, capitalizing on someone else's illness and playing hooky, but I promise she's fine now, and I felt awful for her, and there was really no other option, I can't leave my kid there unattended with someone too ill to care for him. And, I'm selfish and like things that work out for me (preferably not at someone else's expense thems the breaks sometimes). I especially needed today after my last post.

This wonderful Monday (such an oxymoron but true in this case) followed yet another epic weekend of eating and kid activities. I used to be worried that after having a child, I would miss my past lifestyle of nightlife (my early 20s) and insanely long runs and races (my late 20s). However, I can honestly say that going somewhere full of brightly colored, loud musical toys and full of toddlers is something I look forward to now just as much as I ever did with racing or nights out.

On Friday we met up after work to go to Storyville (a free book themed gigantic play place at the library). I've been dying to go since Dalton could walk and try out the Toddler Bay.

It lived up to expectations and we all had a great time. That night, I thought we nailed dinner.

Looks delicious, right?But, it was inferior to the pizza we had later on this weekend. You'll see why.

Saturday morning I used the Port Discovery annual family pass that our generous friends got us for Dalton's birthday (Port Discovery is a really cool children's museum). They had a member's only preview of a new exhibit, before they opened to the public for the day. Naturally this made me feel super important and I'm not even lying when I say I was looking forward to it all week.


The exhibit was customized for my nephew, who's obsessed with Holsteins. I can't wait to bring him when he visits this winter. I was lucky enough to have two good friends, Carolyn and Kandi, and their little boys join me.


Next up: a water table/playplace that takes up an entire room. 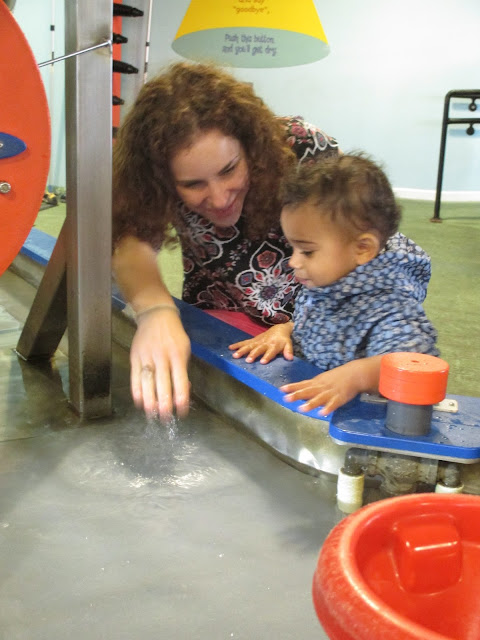 We finished up the morning at Tot Tails with the giant light bright.


Kandi lives kind of far from the museum so I lured her in with promises of Shake Shack for lunch, and I had to deliver. Eric was devastated, of course. I'd never eaten there, only gotten a shake once (it's relatively new to Baltimore) and my burger and fries were heaven. The boys each devoured their own burger, of course.

Sunday was Carolyn's birthday and she had friends over for lunch. Here's where our Papa Johns was put to shame. Her husband ordered her favorite food, deep dish pizza from Lou Malnati's in Chicago, and they apparently ship it right from the restaurant all the way to the east coast on dry ice. Best birthday surprise ever, and best November 15th surprise for the rest of us.

And that's the story of another weekend of amazing food and fantastic toddler activities. I have all these fantasies of doing fun stuff like this nonstop on my maternity leave while I just wear and snuggle the new baby...I suspect it's a lot easier in my fantasies than it will be in reality.

For anyone concerned about my cholesterol/ability to live till 40 based on my diet, I promise we do spend the non-blogged about meals eating things like veggies, whole grains, and lean proteins. But I have to capitalize on eating for two while I can.

What do you look forward to and enjoy now that in your past life you wouldn't have been caught dead doing?