I've now come head to head with the Cloud Snapple Half Marathon three times, and I've finally defeated it.

In 2011, the course (a towpath along the C&O canal) was covered with about six inches of snow and melting ice. I ran something like 11 minute miles and still fell.


In 2012, the weather was fine, but the course was short (it was about 12 miles). I was having the type of race where they could have put the finish line at the one mile mark for all I cared.


Similarly, I've been having a battle for nearly three years with my half marathon time. I ran my second ever half marathon in May 2010, when I was still new to distance running. I aimed to run it in under two hours and ended up with 1:50. Amazing, right? If only every race could be like that. But, my PR has remained at 1:50 ever since. I managed to chop a few seconds off the following April, but I was stuck with pretty much the same time, and it still hadn't improved almost two years later. It was getting to the point where I was pretty sure that I was cursed in the 13.1 distance.

Finally, today, the stars aligned and I beat the Cloud Snapple AND broke my half marathon curse in one fell swoop. According to my Garmin, I ran the race in 1:48:27.

To do this, I had to bust out two secret weapons. 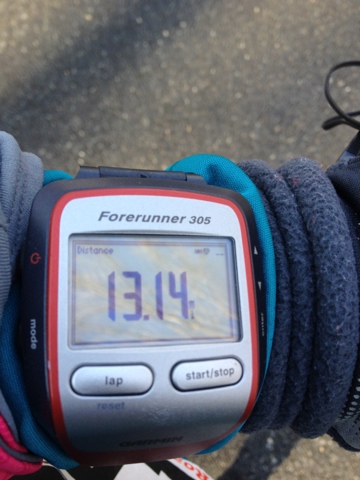 So far, all my best races have been when I don't look at my Garmin. Conveniently for me, Victoria just posted a fantastic explanation of why this is. However, I wasn't sure if I could resist the temptation, so I just eliminated it as an option. 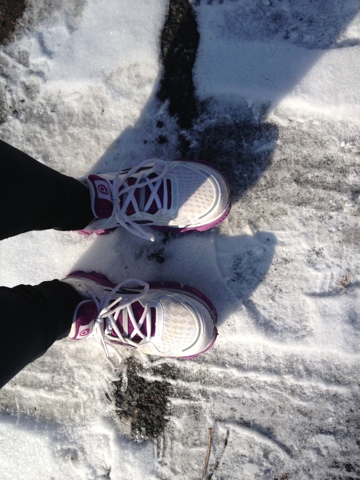 It's not just because they are pretty colors, the PureFlows weigh 7.1 ounces, and my normal shoe, the Adrenalines weigh 9.4 ounces. It doesn't sound like a big difference, but I swear they feel so much lighter and make me faster.

I was dragging a little in the second mile, still warming up, when secret weapon #3, which I didn't even know I had, hit me. 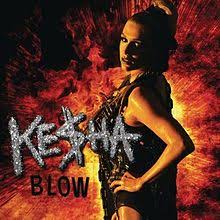 I challenge anyone out there to listen to Blow and not run faster. Especially during a race.

To be honest, I was really anxious about this race. All day Saturday it was on my mind. Going for a PR is hard, and while not looking at my time helps me mentally, it's not easy to keep a pace when you can't even check to see what your pace is! You would think that was why I never mentioned I had a race coming up on the blog, but actually I just completely forgot.

I got lost on my way to the race and ended up in Virginia. I'm pretty sure this is the same thing that happened last year, but it worked out great because I channeled all my stress into that, instead of the race itself, and I still got there in time.

I ran into a few friends at the start, and even then I was hesitant to admit I wanted to break 1:50, because, you know, then I would actually have to do it. And it was going to hurt.

The race started right on time, at 9am. The towpath was covered with a layer of snow, but other than a few spots wasn't too slippery. Plus, this is the same towpath that 27 miles of the JFK 50 took place on, so when the going got tough, I just enjoyed reminding myself "remember that time you started running on this thing and you had 35 MILES to go? Thank God that's not the case today".

I love just being able to zone out and run, so this race was perfect - 6.55 flat miles out, turn around a cone, and 6.55 flat miles back. I ran by feel and just made sure that I was out of breath and my legs were burning a tad, but that it was sustainable and I wasn't dying. The last mile was killer, as always, and it was a little nerve-racking, since I had no idea what my time was, so all this could have just ended up as a huge disappointment.

I turned off the towpath to the finish and someone yelled out "125!" and for a second I was like "WOW I really killed that old 1:50 PR" but then I realized it was my bib number. Still, I saw 1:48 on the clock and was thrilled. 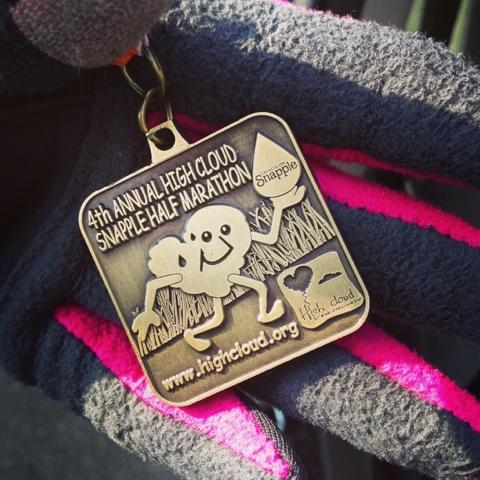 I kept going right after the finish line straight to the car to change clothes in the wonderful heated bathroom provided.

When I finish a race and it's below freezing out, I have an extremely small window of opportunity to get out of my soaking clothes and into a minimum of two jackets before I end up shaking uncontrollably for hours. I wish I were exaggerating.

The race shirt was exactly the same as the past two years, but they upped the ante and gave me this sweet running beanie. I wore it all day and love it so much. 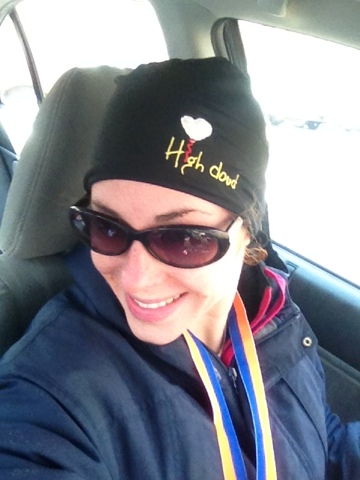 I drove home and showered, and then it was time for what is apparently our new Sunday tradition - football and meat. There were no NFL games on today (although, if I've learned one thing in my marriage, it's that there is always a football game of some sort on, somewhere) so instead of watching, we played.


Eric and I joined a touch football team that starts in March. One of his friends texted that he was getting a game together today, and since I don't think I've "played" football since high school gym class, it seemed like a good idea. We played from 3-5 pm, and it was fun, but FREEZING. Long after we left, I had three jackets on and was still shivering.

As soon as I proclaimed myself a carnivore on Facebook, people started telling me I needed to go to Abbey Burger Bistro. 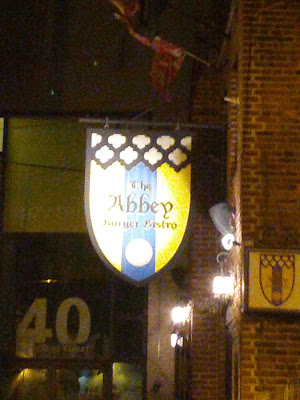 There are about a million toppings and you can create your own burger. They had crazy stuff like kangaroo meat and a peanut butter burger, but since I'm still new, I stuck to somewhat more traditional stuff - beef, brie, mushrooms, avocado, tomato, pickle and mustard on a pretzel roll.

I felt like Dorothy when suddenly she sees Oz in color - I didn't know I was missing out, but eating a veggie patty is just not nearly as satisfying as the real deal.

What's your secret weapon in a race?
Posted by Alyssa at 10:18 PM