This may be my second rodeo, but I still find it completely mind blowing just how quickly babies change. Royce has had so many firsts and big transitions since I’ve posted about him. (Or at least, since I’ve done a specific update post, since all my posts are about kids now.) He's now more than halfway to his first birthday and has officially doubled his birth weight at nearly 16 pounds! The day he turned six months, I couldn't bring myself to put him in his crib at bedtime, and just held him for hours and cried. I love this fun baby age, but it's racing by way too fast.

The day I ran the half marathon, Royce somehow flipped himself onto his stomach while completely swaddled. I’d always heard that you have to make sure you stop swaddling babies once they are able to roll IN the swaddle, but I assumed it was just something the swaddle companies said to avoid getting sued. I never thought it was something a baby could actually do. I certainly couldn’t roll 180 degrees in what is essentially a strait jacket. But apparently Royce is living up to his name, and rolling like a champ.

So I was faced with one of my biggest nightmares: stopping the swaddle cold turkey. There was nothing I wanted to do less, but it was now a safety issue. (If he rolled to his belly while swaddled, he may not be able to roll back and could potentially suffocate, even though luckily when he did it as a surprise to us he was smart enough to raise his head and yell for Eric.) It did not go well. The whole point of a swaddle is that babies don’t really understand how to use their hands and tend to smack themselves in the face and yank the pacifier out repeatedly and as you may imagine, this makes it difficult for anyone to fall and stay asleep. I was already exhausted from the race, and now sleep was a total shit show. 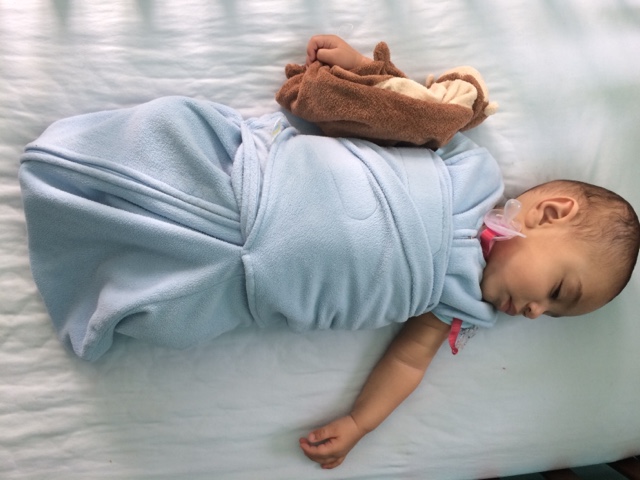 We tried all different things, one arm out, both arms out, no sleep sack, holding on to a lovey to give his hands something to do, sleeping on his belly, etc. We had varying levels of success but he still wasn’t really sleeping too well. Finally, I caved and moved him into his own room. I really didn’t want to. I say it’s because I don’t want to go up and down stairs in the middle of the night to feed him, but really it’s because I like having him close and I miss him. However, in addition to the slapping himself in his own face issue, he has become more sensitive to noise and when I would come up to bed he was waking up at the slightest sound, so I can only imagine I was waking him throughout the night.

Once we moved him to the crib, we started to work on moving him away from night nursing like we did with Dalton at this age. Not night weaning, just not using nursing as the go to every time he wakes up. If he is crying (not fussing, but actually crying), Eric goes on and works on soothing him, and, failing that, brings him to me to eat. Eric is usually able to get him back to sleep, so the past week or so I’ve only had to wake up once or twice a night to nurse. It’s glorious. I feel like a new woman. I don’t even sleep with the monitor (Eric keeps it with him) so I don’t hear anything and only have to wake up if Eric brings him in. Our pediatrician was adamant with Dalton that he didn’t need milk at night nutritionally, but that didn’t feel right to me so I continued to nurse at night if needed until he weaned completely.

With Royce, I saw a medical student for his six month visit (with the pediatrician supervising). He said that all babies are capable of sleeping through the night at 6 months. This seems crazy to me - every other baby milestone has a huge range of when they might reach it, but at 6 months they can magically all sleep through the night? I don't buy that. While many babies do, it hasn't been the case in our family and I don't see anything wrong with that. I also feel Royce is still hungry during the night, especially since he often only has two of his three bottles at daycare. I think he’s holding out for straight from the tap, which is fine with me. I don't really appreciate when people give me their opinions on how much food should be on my plate, so who am I to decide when my kids should or shouldn't be hungry? (Not that our house is a toddler free for all snack buffet.)


I picked him up from daycare last Monday, and our sitter said he’d woken up from his nap feeling hot. His temperature was 101 when we got home, not really concerning, but enough of a fever that we decided to keep him home the next day. That night, he cried every time I tried to lay him down, so he ended up sleeping in bed with me, nursing most of the night, just like when he first came home from the hospital. In the middle of the night, I realized he was burning up and his fever was almost 103. Poor poor Royce. It ended up being an ear infection, nothing a little amoxicillin couldn't fix.

Royce was back to his normal cheerful self just in time for the big sixth month event - starting solids!

First up: avocado, which he mainly just played with, but he seemed to enjoy that and Dalton certainly found it fascinating.

Carrots are really where it's at.

I wasn't sure about this whole baby led weaning thing but I sliced up a carrot and roasted it with some cinnamon and nutmeg (allowed? unclear) and Royce loved it. He was able to pick up the pieces from his tray and get them in his mouth! He did a more sucking and gnawing than eating, but he definitely seemed to like the taste and was really focused on getting more pieces in his mouth.

We've packed up so many baby items recently. The rock and play, bouncer, and the baby bath. Royce has graduated to the duckie tub!

Dalton just makes my heart explode every day with his love for his little brother. We went to Wegmans the other day, and I usually wear Royce in the ergo while pushing Dalton in the cart. We were lucky enough to snag a tractor cart (full disclosure - I made Dalton sprint towards it with me when I saw another family with young kids in the parking lot - Wegmans only has like 3 of those carts so you have to be ruthless). Dalton said "Royce sit here" very insistently, and while I wasn't totally sure Royce was ready, since he can't sit up on his own yet, I tried it out. As soon as I put Royce in, Dalton started showing him how to put his hands on the steering wheel to "drive". I died.

Dalton is constantly checking in with Royce, giving him a hug or kiss or making sure he has a toy. Patience doesn't tend to be a strong suit for toddlers, but Royce often grabs his hair, as babies do, and since Dalton has an amazing afro, Royce really gets his strong baby grip in there. Dalton always just calmly gets our attention to ask us for help, and never tries to shove Royce away or get aggressive with him. It just blows my mind that he has been so loving towards him since the very first day he came home from the hospital. The sibling bond is truly amazing.

That pretty much sums up life in our household lately! Every time I turn around, Dalton is saying something new or doing something so sweet and/or hilarious, and Royce just chills, smiles, and takes it all in (or spots something interesting on the other side of the room and rolls away). 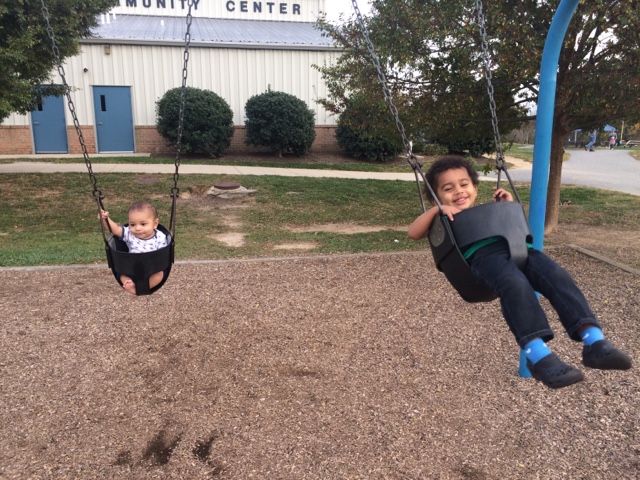