We are now in the phase of Dalton's age just being counted in years (as in, stranger in the grocery store says "How old is he?", the answer is 2, not 28 months because that's just ridiculous). However, for the purposes of this blog post, I will note that he is 2 years and 4 months, which also means that I have been off the #twoundertwo hashtag for a full four months, and it's time to reflect on it.


In my experience, being pregnant with a baby (at the time, he seemed like a toddler, but when I look back at pictures now, he was still a baby!) leads to comments.

These are including, but not limited to: 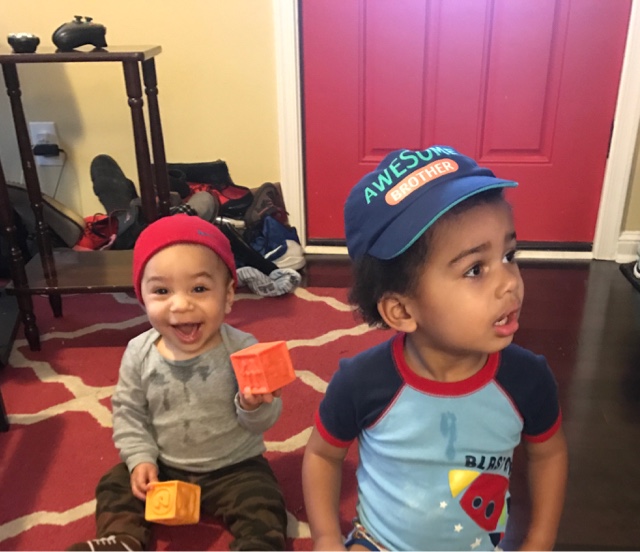 Of course, all pregnant women get comments, but these were the variety that I heard (in addition to the nonstop oh it must be a girl! do you hope it's a girl?? but that's a whole other post). I can't say they bothered me, because I totally would have agreed with them in my very recent past. I thought people who had kids close together were insane. Didn't they want a break for their bodies? One of my friends who has a child very close in age to Dalton planned to try for a second when her son turned one. I specifically told her she was nuts and might have even shaken my head reading her message. This was while we were both still pumping at work, and I know I said something like "but your boobs need a break!". The thought of another pregnancy, delivery, year of pumping at work...it all made me sick.

My siblings and I are all 3 years apart, my niece and nephew are three years apart, and that just always seemed like the norm for me (and Eric is ten years older than his only sibling!). We thought maybe we would start trying a little after Dalton turned two. AKA....around now. I ended up getting pregnant with my little #impulsebaby two weeks before my aforementioned "insane" friend got pregnant with her second.

So what changed? We realized that our reasons for waiting were largely because we didn't want to pay for two in daycare at the same time (which we still don't, no one does, it's stupid). And we just wanted another baby sooner rather than later. We aren't getting any younger, and we wanted to just keep it moving with the baby stage before we got used to sleeping and stuff again. Getting pregnant with Dalton took a year, so getting pregnant right away with Royce was a bit of a surprise.

Obviously things constantly change with kids, but so far I really love the small age gap. Dalton adjusted so well to Royce. He wasn't talking yet when he was born, so who knows if it was his age or personality or whatever behind that, but seeing them together constantly melts my heart. I know this sounds corny but they really have had a special bond since day one. Dalton is NOT interested in babies in the slightest, but he is constantly checking in on Royce, bringing him toys, trying to share food with him, wanting to play with him - it's just the sweetest. While there is a huge difference between a newborn and a 19 month old, there isn't much of a difference between, say, a 7 and an 8 year old, and I'm really hoping they remain close and always have a playmate.

From a parent standpoint: Of course adding a new baby to the family was a huge chaotic change. But I don't know of anyone with kids of any age that would describe it any differently. I think my mom summed it up when she was telling me about a time she was watching my niece and nephew. She said she forgot how long it took to take both kids anywhere, even somewhere simple like the grocery store, and she said "oh,but of course you know all about how long it takes". I thought about it, and realized I actually don't know. It's more like on those rare times I go somewhere by myself, I'm shocked and confused about how fast and simple it is. The flurry of coats and shoes and sippy cups and excessive packing the diaper bag and false starts when someone poops right after you put them in the car seat - that's just normal life for me now. So yes, while having two very young, needy kids in diapers, still at the age where they need constant help and supervision might seem wild and busy and even insane to an outsider looking in, it just feels normal at this point.

Would having an age gap of 3 or 4 years be easier? I have no idea. I haven't experienced having a 3 or 4 year old child, so it's not like I have a basis of comparison. I know I feel like I already forgot so much baby stuff. What milestones should he be hitting at this age? When am I supposed to give them water? Can they have IB Profin yet? When are they allowed to have blankets in the crib? Etc, etc, and I can only imagine it would be even worse the longer I had waited.

So far, the hardest parts for me have been potty training and baby mobility. Trying to potty train Dalton with an infant around was the first time I was ever like "ok, I can see why people wait to have a second baby".


Royce becoming mobile has also been a real game changer. This summer, while I was still off work and home with both of them on my own, things felt extremely doable. My friends joke that for the first few months of Royce's life, all they ever saw was the top of his head because he essentially lived in the Ergo. I could throw him in there, and go about life as usual with a toddler. As long as he got milk and diaper changes, he was good and I was free to expend pretty much all my mental energy on Dalton. Now, that's not the case.


He's crawling everywhere, pulling up on everything, obsessed with eating solids, and overall just a lot more like an actual real person. Of course that's wonderful and fun and amazing, but it's also more challenging. And Dalton may be over two now, but he doesn't require any less from me (and really if anything, more).

So, would I recommend it? Overall, it gets a two thumbs up for me.


Here's a handy little guide in case anyone out there is considering this idea.

#twoundertwo may be for you if you:

In summary - #twoundertwo is the best.