That time we lied on the radio


I've gotten SO MANY nice supportive comments in various social media forms, so I bet all you wonderful people are here to check for a gender announcement. Well, joke's on you, we still don't know!

Funny story, we got subs for the end of the day (as in, people to do our jobs, not sandwiches), went to the lab, got called back, and then were informed that we couldn't get the ultrasound. My doctor's office doesn't do them (it's a really small practice), so they refer out.

I spent some time considering how to find a way to make the reason why they wouldn't see us interesting enough to share, but honestly, it's really not. It's no one's fault, just a miscommunication and an overall major fail.

I'd like to say I took it all in stride and laughed it off as we headed out the door, but that's not really my style. I felt like a big giant dummy for telling literally everyone I know (um, we were on the radio this morning announcing it, no joke) and then having to be like "hey, just kidding about that!". 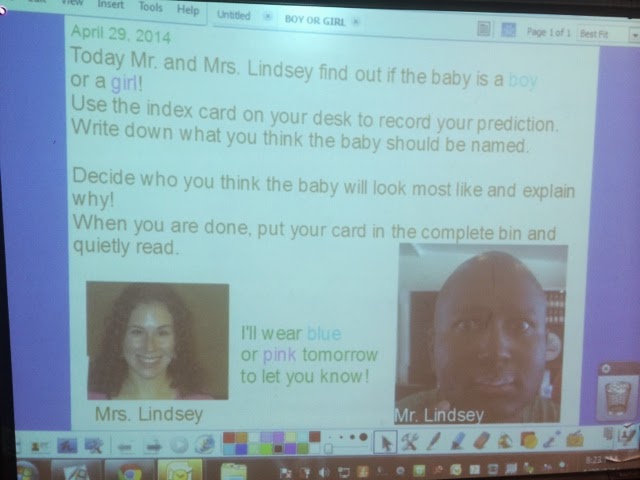 I tried really hard not to, but I ended up wallowing in disappointment and guilt for like 45 minutes before I was able to get my big girl pants on and get over it. Disappointment because I am the most impatient person EVER and I WANT TO KNOW RIGHT NOW. Guilt because logically, I knew this was no big deal and it was ridiculous for me to be upset about, but I couldn't seem to stop.

I blame my reaction entirely on boasting. Just last night, I was bragging to Kara how I stayed completely dry-eyed during a really sad Buffy episode (Prom). I believe my exact words were something like "I'm normally so emotional and prone to crying but not at all during pregnancy!". You win, universe. I ate my words on that one.

Eventually though, logic prevailed and I was able to act like an "adult" again and get over myself.

What I should have done with the extra time: work on my grad project, due in six days.

What I actually did: watch two episodes of House of Cards with Eric (we're still in season 1 - no spoilers!).

One really cool discovery I've made this week is that asking people about birth advice brings tons of lurkers out of the woodwork to comment, which I absolutely love. I really enjoyed hearing about everyone's birth stories! Full disclosure - natural childbirth sounds awesome, and I'd like you all to read that in a non-sarcastic tone of voice. I think I'm still going with the epidural if at all possible.

We have another appointment next week, and if all goes according to plan, I'll still share whatever adorable little blue or pink outfit follows!

Are you a crier? I generally shed tears for the most pathetic reasons you could imagine, happy or sad.