I need a nap (story of my week)


It's been one of those weeks where Tuesday night I couldn't believe it hadn't already been a month. But is there anything cuter than a baby in a Guess romper? 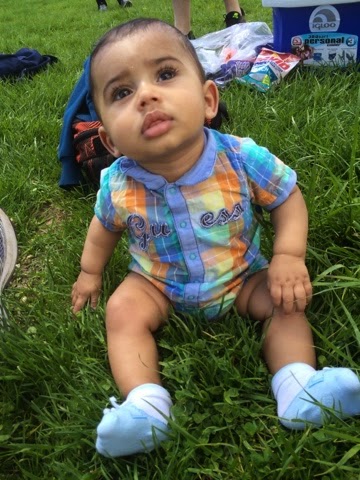 First of all, on Friday of last week, we all finally returned to work and daycare, back to being pictures of health. So we thought. Then Dalton's daycare lady said she thought he had pink eye. As soon as she said it, I was like OF COURSE. I'm a classic stupid first time mom all week thinking "weird he has green stuff coming from his eyes, I've never seen a cold do that, babies are so strange". DUH. But in my defense, he had been to the pediatrician and they hadn't mentioned it.

Obviously, as a teacher, you can't just peace out even if your kid does have pink eye. We had a fun conundrum where I was able to get coverage, so I could leave, but Eric had the car, and no coverage. Eventually he was able to work it out and left at 11:30 and got Dalton and the doctor called in eye drops and by Saturday his symptoms were gone and we even figured out how to administer them with zero crying.

On Saturday we finally test drove some cars. But we had to take turns driving while the other person sat in the back seat of my car with Dalton, so testing two cars took like half the afternoon and then Dalton was over it and we had to go home. Pretty effective. Originally we had planned to ditch him with friends so avoid that whole issue, but, pink eye. Although leaving him even more upsets me anyway so I wasn't mad.

We also won a kickball game and I also got on base which might be a personal best. Eric's friend invited him over for the fight and he was all like "nah I'll watch it at home" because he felt bad leaving, Baltimore was still under curfew so if he went over he would have to stay all night. I was like "um it costs $100 and if I hear one more word about this stupid fight I'm done see ya in the morning don't let the door hit you on the way out".  I watched reruns and went to bed at 9 and then ended up sleeping all night in bed with Dalton because he was coughing so bad and waking himself up every ten minutes. I felt so bad for him, but again, not mad. I love the cuddles.

Sunday was awesome. Dalton and I did a 7 mile stroller run with our friends Katharine and Zoe. It was perfect. Then we went to my happy place, Wegmans. I spent all Sunday afternoon cooking adult and baby food and unpacked zero boxes while Dalton passed out on his dad for FOUR HOURS. He needed that nap so bad. 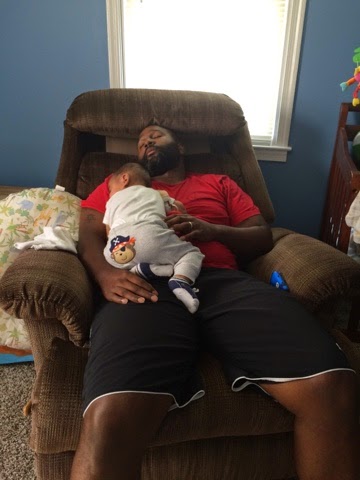 When he woke up, he tried chicken for the first time. I mixed it with carrots, basil, and a good amount of garlic and paprika. Loved it.

Monday night we had an evening event at school, so that was a long day. I brought my tiny BFF, because really if I don't see him after work I have nothing to live for. He likes looking around at all the people anyway.


Tuesday was our big fifth grade field trip! We went all the way to Philly on a coach bus and did a walking tour. The kids loved it and it was so much fun. Obviously I would never post their pictures but I wish I could because they were adorable.

My friend at work lent  me her pumping backpack so with all my gear I felt like I was back in GORUCK on the walking tour. I pumped on the bus and in the bathroom by the liberty bell. Good times.

Wednesday I came home to this.

We have a leak, to say the least. It's loud. We can't actually talk on our main floor now, because that's all we can hear. And it goes on until Saturday. At least! Then they start ripping the entire floor up in our kitchen, living room, and dining room! Home ownership! Yay!

In order to carry on a conversation, we ate on the porch. The weather was gorgeous. Dalton shared chicken masala and naan with us (pre-made from Costco, no way I'm cooking in that mess). I was surprised he liked it so much because it was a bit spicy!

He also had some spring vegetable soup with leeks, carrots, cabbage, and basil that I made him on Sunday. So far, he is his mother's son with his love of garlic and strong flavors.

Would you rather take 70 ten year olds out of state, or have water from your kitchen flooding your basement?
Posted by Alyssa at 7:05 AM