The fourth trimester is this idea that human babies come out too early. If they stayed in the womb longer their heads would be way too big, so, even though my body gave a hard pass to vaginal birthing, I still say, thanks mother nature or whoever designed this system. However, the repercussions are that instead of merrily galloping away right after birth like a baby giraffe, human babies spend the first 3 months-ish of life thinking they are still a fetus and being mainly pissed off to be out of the womb.

In my experience, this means they just want to be held all the time, which can be easier said than done. The first time, it can be challenging because of stupid know it all sanctimommies, largely internet based, that make you think you are somehow ruining your tiny brand new baby by holding it. Subsequent times, it's challenging because of your other kids demanding attention. This is why my friend's joke they never saw Royce's face for the first 3 months of his life because he basically lived in the Ergo (baby wearing device).


Remington is now 12 weeks and the ultimate mom cliche is TRUE SO TRUE. How did she get this big so fast? While our pediatrician told me that they are only considered newborns for the first month, which was downright disrespectful of her, as she ages out of the fourth trimester, I need to face facts. She's not a newborn anymore. She's officially just a baby.

This seems like a good time to attempt to document some things about the fourth trimester, although honestly the whole thing is such a blur that I can barely remember it, despite it literally just happening. Weird how that works.

People always say babies have their days and nights confused. Is this a real thing? Honest question. In my experience, there's been no confusion, it's just been a 24 hour cycle of the same thing. The difference is that at night I have less patience for it and want the baby to sleep away from me so I can sleep (spoiler: baby don't care what I want). Possibly the baby sleeps a little better during the day because of being willingly held more and walked around and stuff, but day and night are full of frequent wakings and eating.


Weeks 0-3: very angry and confused about being out of the womb. Much crying. Not really getting the whole concept of eating and sleeping being separate events. Nor pooping, for that matter. Example: rooting, suck a little, pop off, doze, eat a little more, doze a little more, poop, diaper change, cry during the whole diaper change because she isn't being held or nursing, repeat 24/7 for 3 weeks. Days and nights are just a constant blur of half asleep (both her and me) nursing, holding, pooping every time she eats, so like 14 times an hour, and crying when (rarely) put down. Hates everything that isn't boobs. This results in hysterical screaming every time she's in the car seat which is stressful AF for the driver.


Weeks 3-6 (I think? Maybe only 3-4 or 5 weeks idk.): Sleeping and eating consolidate into mostly separate events. Both still happen around the clock in short intervals, but there is starting to be a little more space in between nursing sessions that yield a full feeding. 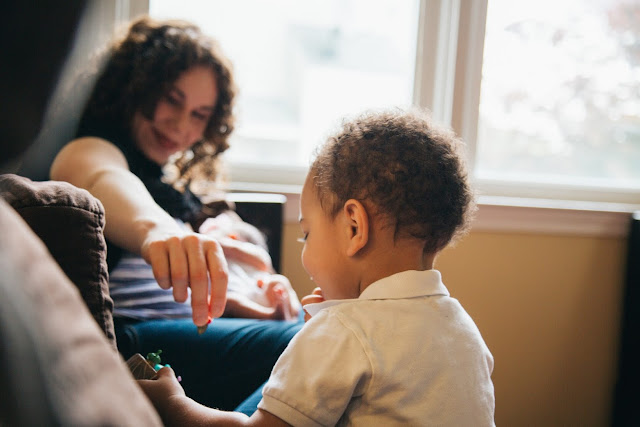 Still very angry at being out of the womb. Rarely awake. If she's not eating or sleeping, she's crying. Witching hour hits hard. Usually several hours of on and off crying before/during/after (my) bedtime, sometimes until like 11pm! The only hope for stopping it some sort of uncomfortable exercise for me, like walking up and down the stairs with her, swinging her in my arms belly down, things like this. Nursing doesn't help because she wants to comfort suck and becomes furious when the milk lets down. Very frustrating when I want to go to bed early because, duh, a newborn is going to wake me all night. Even more frustrating in the middle of the night.  As a first time mom, I would have (and did, since Dalton was similar) panic daily that something was wrong. As a third time mom, while I got really, really frustrated in the moment, I was able to easily diagnose her with being a baby and didn't stress about it.


It is important to note here that I was unprepared for this, because for a middle child, I was gifted a trick baby.


A trick baby is the kind that tricks you into thinking babies are easy. When given to parents as a first child, often results in smug, know it all, we have parenting figured out behavior. Royce never cried (other than in the car). He just wanted to nurse all the time. This was super easy, because I just snuggled with him, let him nurse, and watched tv or relaxed. There was no walking up and down the stairs at 2am with a crying baby. Every time I nursed him at night, he went right back to sleep. Like literally every time in his entire life. I had no idea this was a thing, because it was certainly not the case with my firstborn. I have a distinct memory of one time, right after I went back to work when he was about 3 months, where he cried and cried for close to an hour, and nothing would soothe him. I was honestly ready to take him to the ER, because he had never ever cried and couldn't be easily and quickly soothed. I love the videos of Dalton's newborn cry in the hospital and knew I had to get one with Royce. But I didn't. Because he didn't cry. So I had kind of forgotten what it was like to have a typical baby that's often pissed off and won't stop crying.

Weeks 6-12: Somewhere in here, probably closer to six weeks, Remi decided to take the pacifier! Hallelujah, diaper changes, car rides, anything where I can't hold her suddenly at least had an option to make them bearable. There is still crying, but not every time. It's becoming less and less. Around 2 months, she's starting to have periods of awake, non crying time. Interactive time even, where she looks at me or Eric, smiles, watches her brothers, and almost starts to feel like a real member of the family.


She still sleeps the majority of her life though.


Nursing every 1.5-2 hours during the day (and not more, god help me if I try to feed her when she's not hungry, no cluster feeding for this one). Usually every 2-3 hours at night, but, knock on wood, starting to have a longer period of sleep at the beginning of the night. I'm not getting excited about that though, since we are just about a month out from the four month sleep regression. I don't like to talk about sleep because I truly believe in the jinx, but I will say nights are feeling much more manageable. The witching hour is nearly gone.

Essential baby items, weeks 0-12: boobs, arms, diapers, car seat. If you have older kids, the Ergo or some type of baby wearing device. Staircase is helpful to walk up and down with the baby in your arms, but we didn't have one with Dalton and we all survived.