When a Porto Potty is a step up

When I first heard about the GORUCK challenge, I was completely in awe that such a company could even exist, because who in their right mind would EVER sign up, much less pay their hard earned money for that torture?

And yet, somehow, I was convinced to try it.

The fun started Saturday night when Colleen, Lily and I met at Jackie's house to prepare, which meant duct taping four bricks together to put in our ruck sacks. 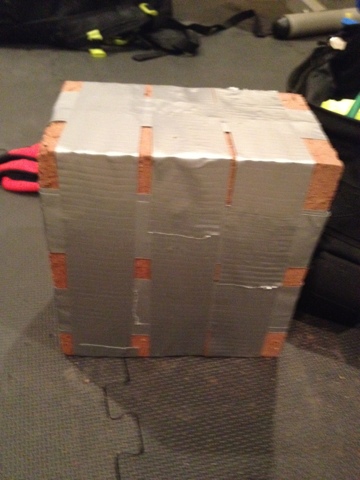 If you prefer NOT to have the sharp edges slamming into your back all night, foam padding is essential. 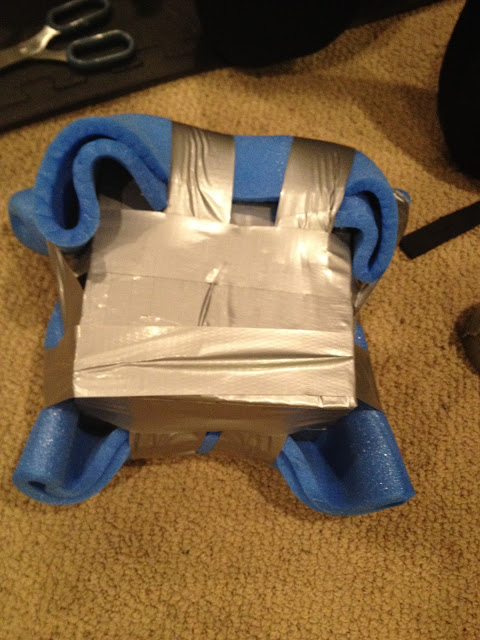 As Colleen and I sat on the floor wrapping bricks in foam padding, I noted that all of my friends were at the bar at that time. How did running with bricks become our choice Saturday night activity again?

On the way to Annapolis, we were basically hysterical with nervous energy and talked nonstop. I drank some coffee with quite a bit of vodka in it, so I was also pretty tipsy. It was fantastic because unlike the other girls, I wasn't nervous in the slightest.

Until we pulled up. Then the fear hit me like a ton of bricks (pun intended) and there was no going back.

The challenge started at 10pm, and we arrived about 9:30, which gave us tons of time to observe everyone in their ruck sacks and panic. I was so sick of the anticipation and just dying for this thing to start already. 10pm came, but then we had to stand around, sign death waivers (very comforting), have our bricks inspected, and listen to instructions before we could begin.

FINALLY, we got the show on the road, and almost immediately were completely submerged in thick, gooey mud. As in, we were belly crawling through it. Then through water. Then we completed the cycle again. Welcome to GORUCK!

The challenge covered about 18 miles over the course of 11 hours and 47 minutes. That's a long ass time to be wearing a pack with 20 pounds of bricks and two liters of water, among other things. It's also a long ass time for a blog post, so I'll just share the highlights.


After nearly 12 grueling hours, we were finally done, and I truly never thought we would make it there. Eric had been waiting for our call in the car for nearly 2 hours, and we were so happy to see him we couldn't handle it. I've had his phone number memorized for over six years since we first dated, but somewhere in the early morning I panicked that I should have written it down, because I was so delirious I wasn't sure I knew it anymore.

One final picture, and the four of us crammed in to a Starbucks bathroom and completely defiled it when we changed out of our nasty clothes for the trip home.

Much like the trip down, the four of us drove Eric insane with hysterical babble about the challenge. I honestly can't believe I made it through. I thought when the sun came up that we were nearly done, but it just kept going on, and on, and on, and every time it seemed like we were done there was more.

All that to earn one of these coveted patches!
So far, after every new experience - marathon, ultramarathon, triathlon, I've finished knowing I wanted to do it again. Like, before I even stumble over to the free water at the end.

So, the million dollar question: would I do GORUCK again?

I'm so glad I did it. It's an amazing feeling to do something you never thought you could, and then sense of accomplishment is incredible. I honestly had fun during parts of the challenge, laughed with my friends, and while it was tough, it was in no way 12 hours of pure misery. I would absolutely recommend it to anyone, the experience was fantastic. I met some great people and bonded even more with good friends. But for me, it will be a one and done. I got what I came for.

This is what my nails looked like after a shower and my ponytail holder that was white when I started. 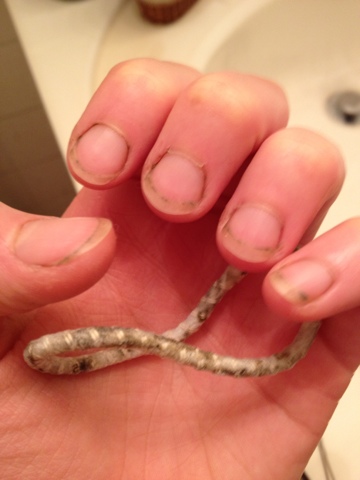 Three hours later, my feet are still white, shriveled, and scary. That's what running in sand filled soaking wet shoes for 11+  hours will do to you. 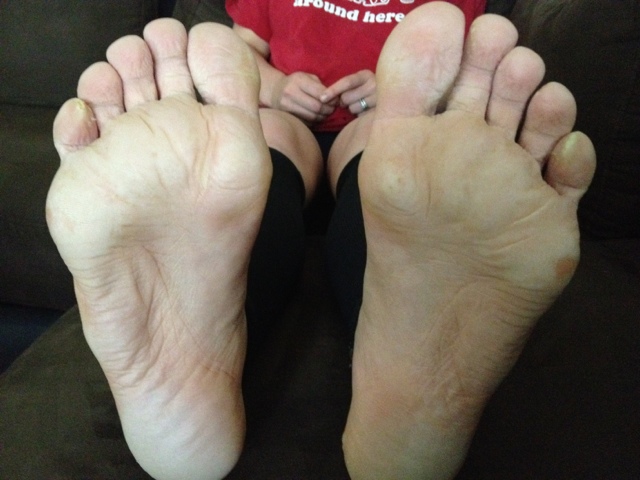 Not only did Eric pick us up, but he's taken it upon himself to wait on me hand and disgusting foot today. I got home around noon, and can't believe I'm still awake! For someone who never even pulled an all nighter in college, I'm at 30 hours and counting. The coffee is helping, although I needed both hands to hold the cup up to fill it because my arms were shaking so bad. Tomorrow is going to suck.

Thank you so much for all the well wishes and concerns over my death on twitter. I have no idea how, but I am currently alive.