This morning, I was up early to run the Cherry Pit Ten Miler (not to be confused with the famous Cherry Blossom Ten Miler). This was a small race in Annapolis for those who couldn't get in to the more popular race or didn't want to inflict the torture of the metro on themselves.

Somehow, both googlemaps and my phone's GPS failed me, and despite the fact that I left extra early, I was still driving around trying to find the school 15 minutes before the race. After numerous times of driving past the red dot that the GPS was trying to tell me was the school and only seeing trees, I called Kara in a panic. Apparently she'd thought my "getting lost" was an April Fool's joke until then, but I guess my hysteria helped her realize it was true. She had to bust out the soothing mommy voice to calm me down and direct me. Contrary to what she'll have you believe, she does have a personality other than angry race bitch. (Although, she went on to lie in her recap about how I got lost and made me sound totally stupid).

Luckily, she'd picked up my bib and I'd stopped in a Safeway for the bathroom, so even though I got there ten minutes before go time I was still at the start with a few minutes to spare, and even had time to find Carolyn.

The last race that I did that was put on by the Annapolis Striders was an extremely fast field, so we lined up a bit closer to the back. This was a bigger race (around 530 runners), so that turned out to be a mistake. I thought I was saying goodbye to Kara and Carolyn after the start, but as we hit an uphill, I had to careen to a stop. It spread out pretty quickly though.

It seems I've had the greatest success in races when I've ignored the Garmin and ran by feel, so I decided that would be my strategy here. I tried to run a pace that felt hard, that I could just barely sustain for ten miles. Although I was one of those annoying "gasping for breath" type of runners, and my average heart rate was 186, I felt great mentally, and really enjoyed the course. It was nonstop rolling hills, so my splits are completely erratic.

I tried to push it extra hard for the last mile and ended up passing a girl I'd been leapfrogging with throughout the entire race. My pace was 7:16 for this mile, and since part of it was uphill, that's ridiculous for me. When I saw the finish line clock, I thought it said 1:26, so I was elated when I got closer and realized it said 1:20! My previous ten mile PR was 1:25 from nearly two years ago.

This race totally proves that I'm my own worst enemy. At my last ten mile race, I was hell bent on PRing, went out way too fast, completely fell apart by mile 2, and was pissed about my time. I can almost guarantee that if I had gone into the race saying "today you will run a 1:20 with every mile being at an 8:00 min/mile pace", I would have failed. I was tempted to look at my Garmin a few times, but I knew if I did and saw that I was running an 8:00 pace, in my head, I'd be all "omg, that's fast, this is hard" even though I'd just been running it and doing fine. If that makes sense.

After finishing, I headed back out to meet Perry to cheer Carolyn and Kara on at the finish. My fingers were too frozen to take a picture, but Kara looked like a wounded gazelle while running - such tragic beauty.

Kara and I usually race together, but today I beat her by 14 minutes. She insisted she was ok with it, but this picture tells a different story. I highly recommend you check out her recap to read it.

Remember those days where setting a new PR in a ten mile race was enough of a workout for one day? That was before triathlon training. After getting a bagel and coffee at Panera with Kara, it was time for a bike ride. I hit up a bathroom to get the spandex on.

I met up with my riding buddies Mike and Jackie. Even though Jackie broke her ankle just a month ago, she rocked out 17 miles with us like a champ! She even flew past me on an uphill. 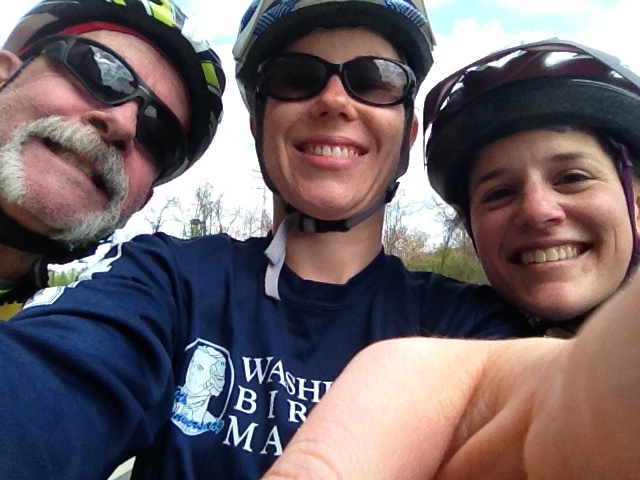 I had aimed to get in something like 30-35 miles for the day. Around mile 26, Mike asked if I was cool with doing a little extra. We ended up with 45.2 miles for the day - another new distance on the bike! This ride was a lot flatter than Friday's 40 miles (thank goodness, I couldn't have handled those hills after a race), but still not easy. My legs felt pretty good on this ride, it was my back and shoulders that started killing me after awhile.

The weather was perfect though, and we rode on all sorts of beautiful routes. Mike taught me how to tuck in when going downhills in order to increase speed, which was a different method than my former one of brake until your hands hurt and pray.

One more huge accomplishment - I pulled out my water bottle and drank while riding. Sounds like nothing, but I've never been able to do this since getting my bike nearly a year ago (mainly due to fear of taking one hand off the handlebars).

Now, as always, I'm about to do some nice healthy refueling.


Does a GPS watch help you or hurt you in a race?
Posted by Alyssa at 7:24 PM