The marathon is one tricky bitch.

In October 2011, I ran my third marathon as part of my training for my first 50 mile race. During my second marathon, I'd finished in 4:17, so I was thinking maybe 4:15 would be a good goal for my third, since I wasn't training for speed.

I didn't look at my watch once during the whole race, and crossed the finish line in 3:54.

Yay! Marathons are the best! I took 23 minutes off my time without even trying! At this rate, I might as well start saving my pennies for a flight, since I'd be at the Olympic trials in no time!

And then I spent the next year and a half trying and failing to come in below 3:54. I got that exact time twice more, plus five other slower times.

To be fair, I also ran two 50 mile races in that time, and learned to bike and did a half ironman distance triathlon.

Finally, after two extremely disappointing failures, I managed to pull it off yesterday. I ran the Bob Potts Marathon in 3:51:32 (official times aren't posted yet, but that's what the clock said).

After a week of healthy eating and excessive hydration, I felt confident and was looking forward to the race. Until about 4pm on Saturday, when nerves took over, and I spent my entire shift at work feeling sick. I stayed pretty positive after cramping up and coming in at 4:01 at the Delaware Marathon two weeks earlier, but that wasn't actually due to my Mother Teresa like attitude. I can finally reveal the actual reason - as I was wallowing after the race, my sister called me to ask me to be her Maid of Honor, because she was engaged!!!

That was awesome, but I was pretty sure I wouldn't be hearing any life changing news after Bob Potts, and there also aren't really any more marathons around here until fall. So the pressure was on to perform.

I actually got a pretty restful 5 hours of sleep, chugged a cup of coffee at 3:30 am, and was ready to leave by 4am. Except, instead of leaving, I decided I NEEDED to put my special marathon playlist on my phone right then and there. Luckily Eric woke up and helped me out. I bet he wonders what life would be like with a normal wife, you know, one who would just be asleep at 4am on a holiday weekend.

I don't know why, but Mother Nature wanted to me PR just as badly as I did. Seriously, what are the chances of seeing this while waiting for a race to start on Memorial Day weekend? 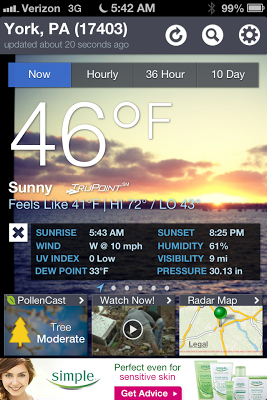 I'd already used up all my throwaway gloves at other races, and with summer coming, I couldn't risk going to Target for more, because we all know you can't go to Target for one item without leaving with at least $80 worth of other crap.

I had to bust out my GORUCK gloves. After they were on my hands, I discovered they were literally filled with dirt and had to run the race with my hands and shorts filthy and smelling like a swamp. 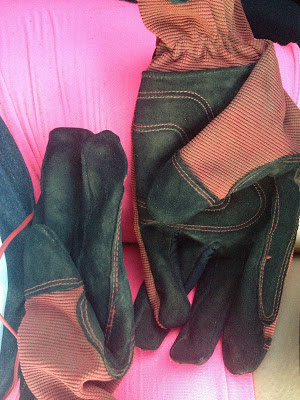 Once again, small races for the win. I arrived about 5:10 am, and that gave me plenty of time to get myself ready, pick up my bib, and use the porto potty five times (not an exaggeration) before lining up at the start around 5:45.


Let's talk about how much I absolutely loved this race. It was put on by a guy named Sean Potts, in memory of his father who ran for exercise way before it was trendy. After everyone lined up at the start, he announced:
"There will be times during this race when you will feel terrible. That's when you need to suck it up."

And we were off. We ran about a mile through York, PA. The rest of the race was an out and back on the Heritage Rail Trail, a crushed rock, mainly shaded, gorgeous flat trail next to train tracks. Aka, best course ever.

They actually could have renamed this race after my dad: The Paige Miller Marathon. He loves trains, and many of you probably remember that time he PR'd in both race spectating and pastrami loading. I thought that was pretty fitting, because he was the one who introduced me to the world of fitness, way back in the day when I was maybe in 5th grade and we used to do Bodies in Motion videos with Gilad.

It was tempting to start too fast, and I think I did (first mile was 8:24), because small races like this tend to be very fast fields. I got passed a ton, but that was fine. The first half of marathons, I always get passed a ton. Then usually I pass a lot of those people back in the second half. This race was no exception.

For about miles 1-6, I was really busy working on my maid of honor speech in my head. I know I exaggerate a lot, but I swear I'm not exaggerating when I say that my sister's MOH speech at my wedding was so good, that the very next day I started getting nervous about how I could ever even attempt to make one at hers. Now that time has come. I feel I came up with some good themes though, and managed to jot them down when I got home.

After that, I just kind of focused on enjoying my playlist (which was totally worth the 4am freak out, it made a huge difference) and settling into my goal pace of 8:50. I truly could not get over how perfect the weather was, and that was putting me in a great mood.

Despite my 5 bathroom trips in the hour before the race, I still had to pee again early on. In mile 9, I approached a porto potty, and I knew if it was unoccupied I could be in and out in under a minute, since my job inadvertently requires me to brush up on my fast peeing skills on a daily basis. I made it and that mile was only 30 seconds slower than the previous one, and I even had time to sanitize my hands.


At mile 20, I checked my time, and I was at 2:56. I actually couldn't believe I'd been running for almost 3 hours. I would almost say it had flown by, and that's really not something I can generally say about a marathon. I felt really good, relatively speaking - so much better than at mile 20 in Delaware. I thought I was running the last 10k SO FAST, but as you can see from my splits, it was pretty much the same speed as the rest of the race had been. Still, I felt regular tired during the last 6 miles, not the praying-for-death tired that usually accompanies the end of a marathon.

I told myself I couldn't even entertain the thought of PRing until mile 23. I was exactly on my goal pace of 8:50, but still terrified. I knew how a good race could all go to hell in the blink of an eye. Mile 23 came and went though, and I was still scared to let myself fantasize about my triumphant instagram picture.

With about half a mile to go, we left the trail and headed back toward the finish line at York College track in sort of an S shape. I absolutely loved this because you could see and hear the finish, and I think I even let out a "finish line" whisper in a reverent, delusional voice.

That little uphill was terrible, but finishing on the track really made you want to give it that kick at the very end, and seeing 3:51 on the clock felt pretty good too. 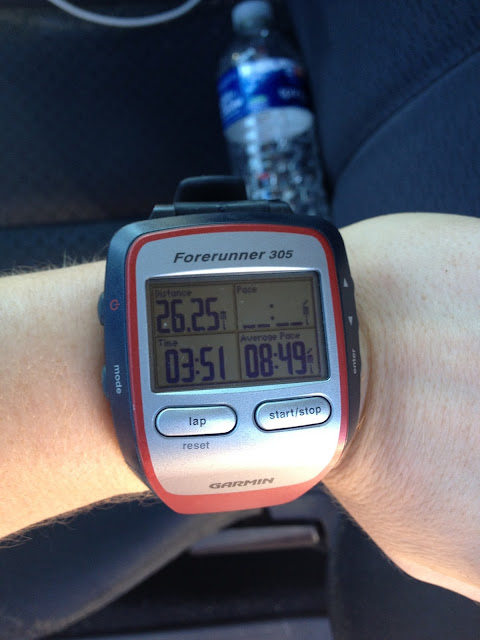 A concerned looking volunteer escorted me to a bench (another nice touch at the finish). This seems to happen often to me at finish lines. You've seen what I look like while I run, so you can probably imagine just how pretty I look by the time I actually finish, so I guess it's not that surprising. By the way, there was definitely at least one photographer on the course, no word yet if it was someone affiliated with the race or just another runner's spectator, but fingers crossed. 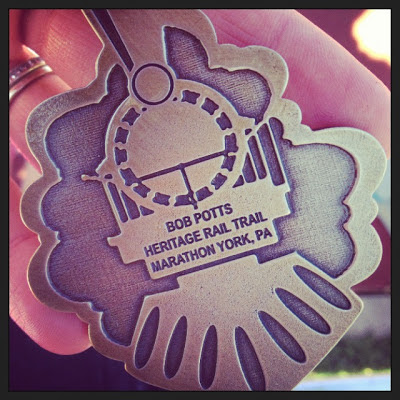 The finish line had cold towels, yet another nice touch, and soft pretzels. I usually don't eat after a race, but
this time I was hungry and devoured two big pretzel pieces in the car. They were just ridiculously salty and no pretzel will ever taste as good as that one.

The last part of my race recap is sentimental, so consider yourself warned.

I really wanted to wear something of my grandmother's, because she was one of the strongest, most positive people I have ever met, and I wanted to channel her energy. I wore this butterfly pin, and touched it every time I wanted to slow down. Gram wasn't a runner, but if she had been, she sure as hell wouldn't have whined through or half assed any races, because that's not how she approached anything. I swear it helped. 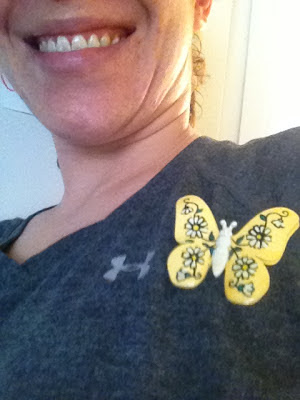 Ok, sentimental part over. All in all, I don't have anything but praise for this race. The only thing is, I think I ran just a tad conservatively, because I was so nervous about screwing up. I didn't finish with that "I left it all on the course" feeling - but that's ok, just makes it easier to devise a goal for next time!

Non-sarcasm warning: All the positive blog comments, tweets, etc, really made a difference, and I totally had them in mind while running. Ok, one more sentimental thought (PRing makes me emotional and cheesy).

I couldn't have done it without you!!