If you don't feel like wasting time with that pesky reading, here's my race in a nutshell. Exactly on my goal pace until mile 20, then my calf cramped like crazy, and I came in at the pathetic time of 4:01:34.

The long version is as follows.

After a week of living it up on my college campus and then in Tulsa, I got home around midnight Thursday night, then stumbled my way through work on Friday. After a super easy 2 mile shakeout run Saturday, Kari, Ashley and I met up in Wilmington, Delaware on Saturday afternoon.

We started off our wild girl's weekend with packet pickup. It was a pretty small race, only around 750 marathoners, and my first outdoor expo. 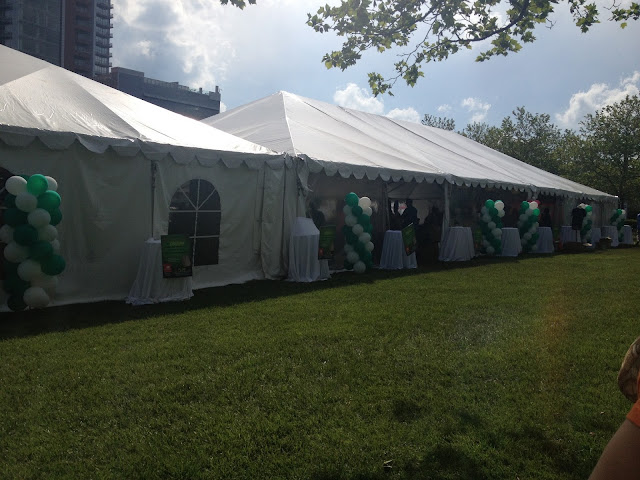 The swag was pretty sweet. The marathoners got notepads and magnets (a teacher's dream), pint glasses, tech shirts, and this gorgeous hat.

We were staying at a Doubletree, which was just fabulous. As if the cookies weren't incentive enough, it was also maybe half a mile from the start/finish. But it gets better. We were seeing all sorts of people dressed in crazy outfits - some sort of combination of adult prom/gay pride parade meets Jewish wedding/lederhosen. We finally asked our waiter what was up, we discovered the freaking King and Queen of Sweden were there on a visit! Kari explains it way better than me.

And as if that wasn't enough of a good omen, check out this bib.

We had a classic girl's night in the hotel room, pillow fight and all. After a restful night of race-related nightmares, we were all up at 5:00am. Since we were staying so close, we got to relax in bed with our coffee and breakfasts, use the flushable toilet as many times as our little hearts desired, and leisurely stroll down to the start line at 6:30. We even had time for a porto potty stop.


I was even feeling confident about my midget legs and big ass attempting to keep up with these long, slim legged beauties.

As soon as we started, I was a little worried because the humidity was somewhere above 80%, and I hadn't been training in anything like that. Kari and Ashley were easily chatting and I secretly was freaking out because I felt a little like I did at the beginning of the Wineglass Marathon, when I could barely breathe.

By mile 6, we were in a nice shaded area and things were looking up. Ashley asked how we felt about a potential PR (she was doing the race as a training run), and I informed them that I felt good and furthermore, it was time to pick up the pace.

Mile 7, things changed again. Ashley had to drop out of the race due to an injury acting up, and Kari and I decided our race strategies weren't really matching up, so we were each going to do our own thing.

The course was 2 loops of the half marathon route, so I was excited to know what was coming in the second half. I passed Ashley cheering outside our hotel, the finish line, and then headed out for the second half feeling like this.

Then that magical feeling turned into black magic and it all went to hell.

My left calf was suddenly hit with a major cramp, and it shocked me so bad that I actually cried out. It went away, so I kept going, but it kept happening over and over. This has never happened to me in any race, or any run at all, it's only happened twice in my whole life (while I've been sleeping). The reason I know this is because leg cramps are one of my greatest fears. I've actually posted about it before.

I took a salt pill, got some Gatorade at the next water stop, and even stopped and stretched, another first in a marathon. My pace had already slowed to about 8:57, because miles 14-20 are mainly uphill, but I had planned on that and knew I could make it up in the last 6. But now, it was down to 8:59, and every time I dipped below a 9:00 mile, my calf seized up again, and then my right leg started joining in. By mile 21, I decided that my triumphant PR race was now a 26 mile training run for the Bob Potts marathon in two weeks.

These splits really say it all.


The last 6 miles were a pretty big downer, and still felt hard even though I was running so slow. I passed Kari and Ashley in front of the hotel just before mile 26 and screamed "THIS IS NOT GOING WELL". I was actually pretty proud of myself for that, because I really had many more choice words for the race, but there were children around.

I contemplated throwing my water bottle in a major tantrum at the finish, but I didn't know anyone there, so I figured that might be anti-climatic. So I just hightailed it to the beer and wine tent, took a sip of champagne and then spit it out and nearly puked, then found Kari and Ashley so we could whine on our trudge up the hill back to the hotel.

All in all, a great girl's weekend, not a great race. Ashley was out at 7, Kari had to drop at the half due to an injury (and wasn't even allowed to cross the finish), and then there's my sob story. We took a defeated picture in the hotel lobby before we went home.

Even though I was upset, and ready to lose it on the next well meaning person who said "at least you finished! that's still an accomplishment!", it's just a race and not, in fact, the end of the world.

This failed attempt was easier to swallow than LPM. Partially because I'm just getting better at sucking at life, but for other reasons too. At LPM, nothing went wrong. I just ran too slow. This slow time has a specific culprit for me to point the finger at. I'm looking at you, calf cramp. Here's my breakdown of what went wrong.
Looking at this, I'm not sure what the hell I expected to happen. But, this is fixable, I was able to hold my goal pace for 20 miles and still feel strong. I still think the Run Less, Run Faster training plan helped me, but I'll withhold official judgement until after Bob Potts. I'm a bit sore, so I'll mainly focus on resting and yoga until the race.

Anything else I should be blaming this race on that I missed?

Any ideas for cheering up after you totally suck at life (doesn't have to be race related)?

All gifs generously provided by Kara.