My push present will be no more cankles (hopefully)


Well, it's been officially confirmed, I have cankles. My husband is a wise man and would just dodge that question with various versions of "you look beautiful!" but luckily I have people at work that I can count on to tell me the truth. My doctor was all impressed at my last visit that I had no swelling. It's amazing what a life of leisure where you sit in air conditioning and put your feet up 90% of your day will do. But now I've rejoined my fellow working suckers who failed to be born/marry rich, and as I expected, my ankles grow to ten times their normal size. It's good because I've missed out on a lot of classic pregnancy symptoms, and this one is painless and essentially not problematic (unless there's something I don't know), so I'm cool with it. This weekend, I had my first time thinking "I could be pregnant for another six weeks. Wow, that's a long time." As opposed to "IT'S NOT ENOUGH TIME WE NEED TO GET READY". So that's a change.

Saturday was Eric's birthday, and also marked exactly one month before the due date. That means it was time to pack the hospital bag. I've been putting it off since it seems to me like that's giving the universe permission to bring on labor.

I had a Braxton Hicks contraction the other night (par for the course, been having them for like 3 months now) and Eric was like I'M GETTING THE HOSPITAL BAG. Aka the empty suitcase in the closet that we previously decided to bring. But since I have at least two friends that had their kids five weeks early, and that's like.... now, I thought maybe it's time to fill that bad boy up.


As usual, every time I go on Pinterest for anything except a recipe, it screws me. A while ago, I foolishly pinned a bunch of "what to bring to the hospital" type things. The hospital bag post is another popular pregnancy HLB one. Maybe I've just been spoiled by living in a really urban area for nearly a decade now, but I don't understand why people pack like they're heading off on an excursion with the peace corps to a remote location with no western luxuries. I keep thinking I'm missing something, because I just assumed that if I was truly desperate for my own shampoo, or something, I could just send Eric on the 10-15 minute drive home and he could get it (after the baby is born, obviously). Or, at least Target. Fathers must leave, since other people having babies have older children and pets and jobs that they can't take off from and other responsibilities.

Furthermore, and I hate to even say this because I don't want to jinx myself, but, fingers crossed, if everything goes relatively smoothly, I'll basically be in the hospital 1-1.5 days after delivery. That's not very long. The only things I truly can't live without for a day are coffee and chapstick, and there's a Starbucks around the corner. If I end up with a C-section, that's still just a 3-4 day stay, so also not that long, and, once again, we live like 5 miles away.

My point is that as usual Pinterest took something simple and made it infinitely more complicated with long, drawn out lists separated into like 6 categories. I'm aiming for pajamas, sweatshirt and warm socks, going home clothes for all of us, toiletries, phone charger, camera, and that's about it. I offered my DD services to my friend the other night, little did she know that since she recently delivered at the same hospital, my secret plan was to get my hospital bag list approved. All the many, many pins also have a whole section telling pregnant women how to pack "for dad". I'm a little concerned about why that's necessary, but luckily I married a big boy who was capable of throwing his own change of clothes and toothbrush in the bag.

We never exchanged wedding gifts with each other, because we thought the honeymoon we were about to go on was a pretty sweet gift. We also won't be doing "push presents" because I don't even know why that's a thing, and I've read you are supposed to get the father one  now? I certainly appreciate his support and all, but get real, when it comes to the birth, I'm doing the heavy lifting. Anyway, we're both really looking forward to the natural push present, you know, THE BABY.

Other major accomplishment this weekend include getting my photo count on my phone from 1000+ to under 200. I fully expect it to be back up towards the 1k mark within like 10 days of delivering. I got really obsessive about organizing my pictures on my hard drive and that's why I devoted an entire Saturday afternoon to this task. I stand by my choices.

I also stayed out until the late, late hour of 10pm on Saturday (Eric was working, I didn't ditch him on his birthday). My friends Jackie and Dan recently moved to St. Louis and they were in town for the weekend. 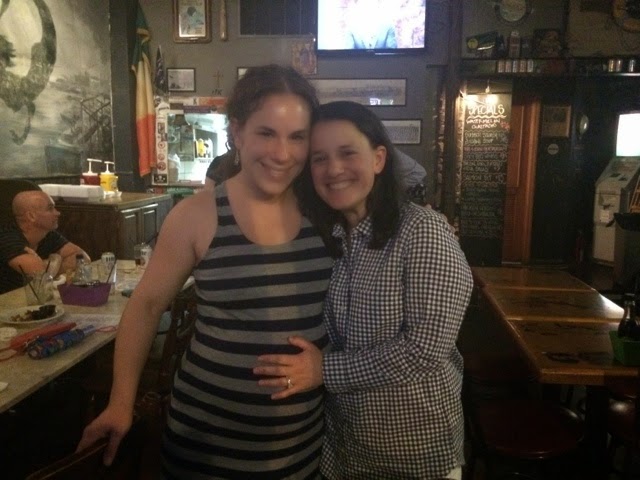 I had this foolish thought that my pregnancy brain was improving but no, that's not the case. When I left, I had a $100 parking ticket on my car. I don't even have a good excuse, I just apparently fail at reading signs. After four years of living in the city and the following five of parking there quite frequently, this is a first for me. So I consoled myself with the Popeyes drive through on the way home. I don't even know me anymore.

We still need to install the car seats and meet with the pediatrician on Tuesday, but other than that, I guess we're about as "ready" as we're going to get.

Did you exchange wedding gifts/push presents?

How many pictures are currently on your phone?  I can't be the only one who hoards them obsessively.