Tuesday was a great day for a Jew/2, like me. (Jew/2 was my nickname in college). I engaged in my annual Christmas present wrapping tradition, while drinking decaf coffee and watching my favorite Christmas movie, Elf.

Ignore my weirdness in this picture, Eric said he was taking a picture to show the tree/wrapping extravaganza.
It was also the first night of Hanukkah! Hanukkah overlaps with Christmas this year - double score. So we paused Elf to light the menorah. Classic melding of cultures. 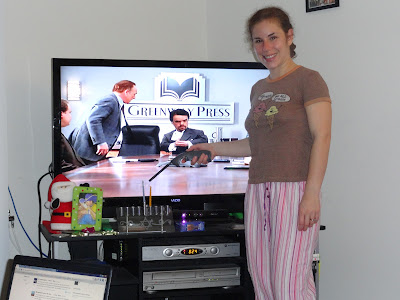 Pop Quiz: why are there two candles even though it's only the first night? Beware - wrong answers may indicate anti - Semitism.

I am trying to stick with Wednesday morning being for swimming. The week before Christmas is a great gym week, I had the pool to myself for almost the whole time, until an elderly gentleman joined me for what I could only guess was some sort of pool dancing workout. I'm sort of embarrassed to even post my swim "workouts" on here or Daily Mile because they are just so slow. My only consolation is most of my readers are runners and have no clue what a good swim time is (like me).

Santa came a little early and dropped off a brand new iPhone for me! Since I've previously posted that I've gone from being all "I'm too cool for a smartphone" to "I can't go four seconds without my smartphone", this was pretty exciting. 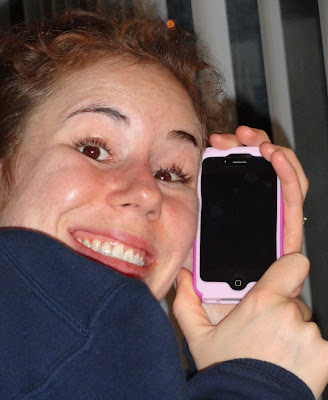 It's actually been a huge debacle getting one, and I really wanted to post about my frustration. I didn't because the whole "boo hooo my new iphone isn't arriving on my doorstep the exact second that I decided I wanted it" was so ridiculously first world pains that I simultaneously wanted to scream at almost every Verizon employee and punch myself in the face.

I'm still trying to figure the whole thing out, but what apps does everyone recommend?
Posted by Alyssa at 8:56 PM