In May, I ran the Bob Potts marathon and then gushed to the RD about how much I loved it like a star struck schoolgirl that Carson Daly choose to come up and see her favorite singer on TRL.

When I arrived at the Endless Summer 6 hour race, I discovered they had the exact same Brooks race shirt, in the same color, (with a different logo, obviously). And an awesome bag. I should have known right then that the race gods were going to bless me with another perfect race experience.

So let's recap this magical day.

I went in with no anxiety, no expectations, nothing except the desire to end the day safely, and if that included a finish, that was just the cherry on the sundae. After last week's drama, I was just glad that this race was in a populated area, and that it would be easy to quit if needed. I spent the night before at my BFF Carolyn's housewarming party. Some friends from a local running group were there and asked me if I had any more ultras coming up. I was like "oh....yeah....well actually I do have one. Tomorrow morning. Well, hopefully".

This may be a good spot to explain the deal with this race.

Typically, a road race gives you a distance, and your goal is to complete the distance as fast as you can. ES6 is flip flopped. Everybody runs for 6 hours, and your goal is to cover as much distance as you can. The race took place in a cute little park in Annapolis. It began at 7:30, and you spend your 6 hour doing as many 4-ish mile loops through the park as you can. Each time you returned to start, it was considered a completed loop, and your bib number was recorded. It was also the aid station, so after each loop most people (us included) would stop, refill our water, and get some snacks.

Once the 6 hour mark was approaching and people were beginning their last loop, each runner was given a flag with their bib number on it. At exactly 6 hours, you heard an air horn, stopped in your tracks, and planted your flag in the ground. A volunteer went through after the race to find all the flags and calculate everyone's exact distance (official results haven't been posted yet).

Fun, right? At this point you may be thinking that doing loops over and over like a hamster in its wheel sounds terrible, but I really didn't mind it for two reasons.

1. I'm a creature of habit. I'll eat the same meal over and over for weeks or months on end. I run the same route almost every day. I would rather watch repeats of The Office for the 17th time then try out a movie I haven't seen before. I like things to NOT CHANGE EVER.
2. I'm not observant. On a regular basis, we'll drive past something new in our neighborhood, like a restaurant or something, and I'll get all excited about it only to have Eric tell me that it's been there since we moved in. 4 years ago. Eric is really concerned about me getting robbed because I have a unique ability to zone out and completely ignore my surroundings at all times.

The race began at 7:30, and I arrived at 7 with plenty of time to hit the porto-potty, get my bib on, find Kara, and listen to the pre-race briefing. 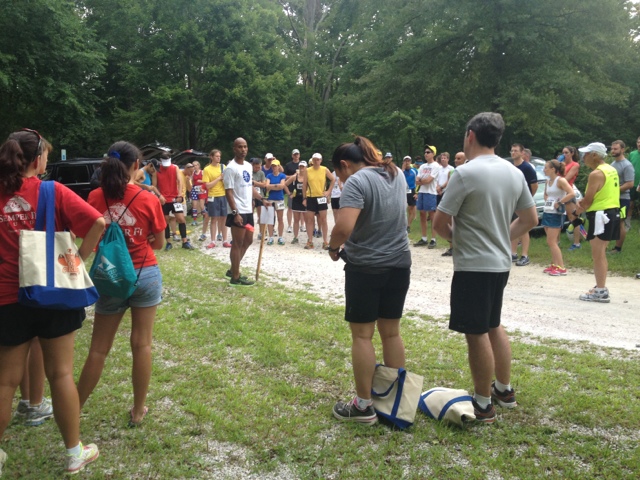 I don't know if I can ever go back to big races. There were a little over 100 runners in ES6 (with some doing the relay, so fewer than that on the path at any given time). Here's my car in relation to the start line. 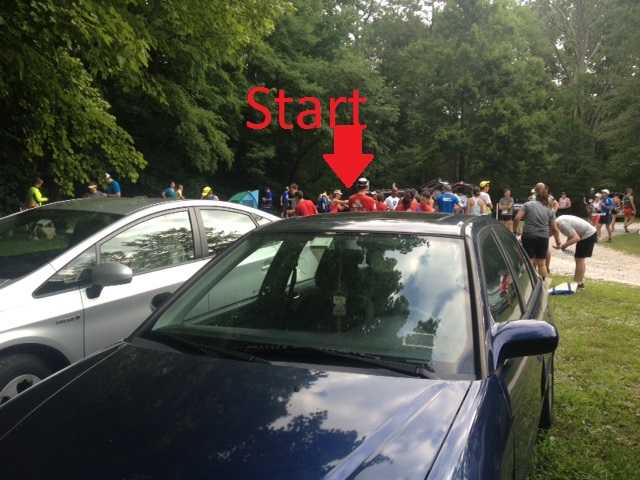 There was a drop bag option, but it turned out we didn't need it. A lot of runners just set up a little area on the ground near the aid station with whatever they might want during the race. So easy, so perfect.

It was humid, but only about 71 degrees and that felt glorious. A good portion of the path is shaded and the sun wasn't yet out in full force. The path has some rolling hills. On that first loop they felt like a joke. We walked up one really just to be polite because everyone else was.

The first three loops seemed to fly by. We were mainly running (only walking a little up hills) and feeling strong. We took our first aid station break after the second loop (mile 8-ish). I also took my only pee break of the race at around 6 miles.

They had the best, most perfectly ripe watermelon I've ever tasted. Eating watermelon is a pretty dumb strategy for an ultra (the idea is to focus on calorie dense foods, so you can take in more calories with minimal impact on your stomach, not voluminous, fiber rich foods), but this was way too delicious to pass up and I think we each had two slices (plus some pretzels for me).

Unfortunately, the watermelon didn't really sit well with me and I had kind of a side stitch on the third loop. No big deal or anything, it just meant I had to turn down the watermelon. The aid station at ES6 was the second best I've ever come across (the best being the Stone Mill 55 miler). They had tons of delicious foods, and the volunteers were enthusiastic, sweet, and basically ready to do anything short of giving you their first born to ensure you were having a good race experience.

I wasn't really sure exactly how to fuel. I usually focus on only "real" foods (no Gu) during ultras, because my pace is so much slower than a road race. But this was on roads, so while it was slower, it was still a lot faster than my trail pace. I think I had:


Other than the watermelon my stomach felt fine during and after the race so I guess it worked out!

You hear a lot about negative splits (running the second half faster than the first) as a racing strategy, and it's a good one for normal races. Ultras in July are not normal. It's much easier to run in the first half while it's cooler and less sunny, so positive splits are really the way to go there. We finished our 4th loop (around 17 miles) when the clock was only at 2:54, which put us well ahead of our goal pace. Ok, I lied, I did go into the race with a goal of completing at least a 50k (31 miles), but I felt like that goal would be pretty easy to accomplish, so I wasn't stressed over it.

The second half of the race was hotter and hillier (the hills grew steeper with each loop, just like at Rosaryville), and the ratio of walking to running was starting to get a little heavier on the walking. Still, it seemed to go by pretty fast and for the most part, we were still having fun. We each had our dark moments, but luckily they didn't come at the same time. Mine was somewhere around 4:20-4:40, but the Roctane snapped me out of it.

You know that feeling of "OH MY GOD I WILL DIE IF I HAVE TO RUN ONE MORE STEP THIS MILE SHOULD HAVE ENDED LIKE 30 MINUTES AGO"? Especially common during miles 20-26.2 of marathons, but also has a tendency to hit on like, 5 milers in your neighborhood sometimes? Never happened. I don't know if it was just the focus on time, not distance, or the relatively cool day, or the great company, or what, but we were at 5:30 and collecting our flags before I knew it.

We hit our goal of 31 miles with 11 minutes left to go, and basically phoned it in until we heard the air horn from there (but we made sure we were running when we heard it). It was weird running a race with no finish line. You know how you usually get that huge feeling of relief, and then a volunteer hands you a water bottle, and you're thrilled to be able to stop running? Well, none of that. You just stop and plant your flag, but then you still have to get back to your car (we were able to cut through the park so it was only about half a mile). So, built in cool down!

Kara's husband was surprised that we didn't run back, and I guess if you think about it from an outsider's perspective, we were already crazy enough to run for 6 hours, why not just tack on an extra 5 or 10 minutes? He couldn't have been more wrong though. I'm pretty sure a lion could have been chasing me and I still would have walked it in.


We hung out for a little bit. I considered getting some food, because my stomach felt fine, but I didn't trust it, so I walked up to the Pavillion twice and came back with only water (and a few pretzels) twice.

When I finally headed home about an hour after finishing, I was getting really hungry so I decided to take advantage of one of my race bag goodies.

The place was bacon themed and I need to go back when I haven't just run a 6 hour race and can eat whatever I want. ASAP.

I did the typical whimpering from chafing pain in the shower, covered all my war wounds in bandaids, then hit the pool looking like a burn victim in a bikini. I almost took a picture for the blog, but then I decided there were already plenty of bikini selfies and the internet didn't need another one. Instead, here's a picture of my foot after two 50ks in a week.

Eric had to work, so I was on my own to celebrate. This next part I'm ashamed to admit, but after the pool I got my first ever 5 Guys burger. Verdict? I just wasted 30 years not eating these, and will need to make up for it throughout the next 30 years.

I spent the rest of the night eating these (which I just learned are called millionaire bars),

What is your favorite chain restaurant for burgers (or if you live in the MD/DC/VA area, name any restaurant)? This is serious, I want to eat all the burgers.

What are your thoughts on bikini selfies?
Posted by Alyssa at 10:43 AM