My original guide to pregnancy, trimester by trimester


You can find a million resources that tell you exactly what you are supposed to be feeling at every single moment of pregnancy, plus your friends, family, coworkers, and every woman you ever meet or see on the street will probably fill you in, and you should listen, because every pregnancy is exactly the same and if someone you worked with five years ago felt the morning sickness begin at exactly six weeks on the dot, YOU WILL TOO.

Since all pregnancies are exactly the same and everyone experiences the world in exactly the same way, I'm here to guide you through your emotional status in each trimester. I'm not done with this journey yet, but if I wait too long then I might be finishing this post when I'm no longer pregnant and that defeats the whole point. (Edited to add: that happened. So most of it was written while pregnant, and a little was written while my 2 month old naps. Edited again - finally publishing it when he's 3.5 months. Use context clues and you'll figure it out just fine.)

The first trimester (approximately weeks 1-13, I guess, even though week 1 doesn't really exist).

The first trimester is the shortest, since you probably won't even know you are pregnant until at least four weeks. Unless you're one of those crazies that starts testing/logging symptoms the second you ovulate, and I'm not judging because I've done it, trying to conceive WILL make you crazy after a few months. Anyway, I stopped that as part of my New Year's Resolution, so I didn't know I was pregnant until 4 weeks and 1 day, which made my first trimester under 9 weeks, but OMG it felt like it actually was the whole 9 months. I swear time stood still. People say it stands still at the end, but I don't agree, I think that scary first trimester is where that happens.

A few things factor into this. First of all, you are probably keeping your pregnancy a secret. Even though I did tell my family and close friends right away, it was obviously a secret at work, on the internet, and from whoever else. It's hard to keep a secret that's the most exciting best thing ever and that consumes your every waking thought.

Second, the first trimester is terrifying. There's a really high risk of miscarriage here, and it sucks, there's really no other way to put it. After spending so long desperately wanting to see a positive test, my non-pregnant self just assumed everything would be sunshine and rainbows once it finally happened. Don't get me wrong, I was absolutely thrilled, but it was a cautious happiness, and I also felt absolutely terrified of losing the baby. The worst part was the four weeks between finding out and seeing the heart beat (at that point the risk goes down significantly). This was something that took me totally by surprise, so I wanted to put it out there.

Third, it feels like you are getting punked. Sure, you saw the test, maybe even saw the heart beat by now, but you can still easily zip your jeans, and there's just no proof that a baby is in there. I was surprised to find that it was a long road from seeing the second line to really feeling like "yes, I'm going to have a child". I definitely didn't hit that destination in the first trimester. For me, that whole time was spent just trying to get myself to believe that I was actually pregnant. I really longed to get to the point I'm at now, where I look down and see my belly and feel my baby move. Now that I'm here, it's awesome, and I really wouldn't want to go back to the insecurity and disbelief of the first tri at all. Maybe it would have been different if I'd had morning sickness, or any symptoms at all, but I didn't. Sorry I'm not sorry.

This is supposed to be where things get good, and I would say it pretty much lived up to expectations. Supposedly you feel much better, but I can't really speak to that, because I felt pretty good all along physically. In the beginning, you're still solidly in the "pregnant or fat?" category.


My friend told me that I would suddenly wake up with an adorable baby bump instead of just looking fat, and I swear that is exactly what happened, right around 21 weeks.


This was where I finally had many "it's getting real" moments, and they slowly solidified the idea that a baby was in fact, inside me. The big turn around really happened when we first felt him move at 19 weeks, and then finding out the sex at 20 weeks. Hitting 24 weeks was exciting too, because that's where there's a significant improvement in preemie survival rates. I started to feel like this might be actually happening.

I spent the whole first trimester wishing time away and just desperately wanting to get to September so that I could have the baby and know it was ok. In the second tri, I started to appreciate that I had a few months left to go, because holy moly WE HAD TO GET READY. It seemed like there were a million things to do around the house, to buy, and to learn to prepare to bring an infant home.


After spending approximately 6 months trying to get past my disbelief that the baby was actually in there, the third trimester was when I finally got on board 100%. So far, this is has been a glorious time when I have the comfort of feeling him constantly move, and I can just put my hand on my belly and fantasize about all the fun things we will do together. I finally feel like I've connected, or bonded, or whatever. It's weird because the second I saw the positive test, I felt that crazy protectiveness and terror that something bad would happen, but it really wasn't until 7 months in or so that I really felt attached to him as an individual, rather than an idea. I feel like that was really sappy by my standards and I cried a little while I wrote it.

I know every mother is probably laughing at my romanticized version of parenthood, especially the ones who write all the viral articles I've referenced. But all that's coming no matter what at this point (there's no turning back!) and I want to record my naïve excitement and enjoy it while I can.

Anyway, the third tri. The second had a lot of things that finally convinced me that I am actually growing a baby. The third has a lot that have convinced I'm actually bringing that baby home and going to be his mother for the rest of our lives. One is that suddenly I can see some type of baby gear in my home, no matter what room I'm in, or what direction I'm looking in. (Maybe this isn't true if you have a bigger home, but it is for me.) As opposed to the second tri, I haven't really felt stressed about it, but that's probably because I've been lucky again and had the whole summer off to take our time preparing for our little bundle of joy.

I definitely go back and forth again between terror and happiness. THE BABY IS COMING SOON I CAN'T WAIT IT'S GOING TO BE AMAZING I CAN'T WAIT TO MEET HIM. The baby is coming soon and I'm going to be responsible for caring for him and never sleep again and his life will be in my hands and OMG what was I thinking? (In case you couldn't tell, this post was written in one of my swings toward the former).

I'm starting to get really anxious about labor and delivery (as I should have been, those contractions suck). That's been pretty well documented on the blog so I won't go into it here, but slowly my shield of utter denial is being chipped away. That's where the part I wrote pregnant ended, so the rest is postpartum reflections.

Physically, not every second of the third trimester was bliss. My ankles were gigantic, turning over in bed was hard, and heartburn was often a nightly companion. I truly can't complain though, I still felt surprisingly good overall, right up until the day I went into labor (39 weeks and 6 days).


The third trimester was by far my favorite. Feeling the baby move all the time was so nice, and I loved my baby bump.


I really enjoyed being pregnant (hopefully that will hold up for future pregnancies), and I'm kind of sad I don't even remember what those little kicks felt like. So if you need a surrogate, let me know.

Of course, this part is infinitely better. 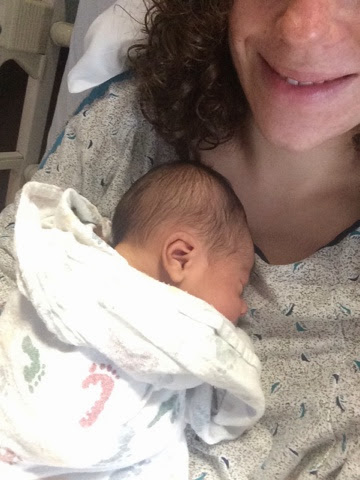 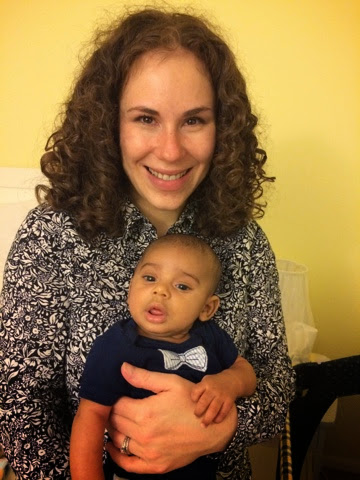 What was your favorite trimester? Did you love or hate pregnancy? If you haven't been yet, would you rather be fat or stupid? I am enjoying both right now, and I would definitely prefer to have my brain back over fitting into my jeans.