I have so many amazing pictures to share from Tennessee, but first, a race report. Yesterday I ran the Rosaryville 50K race for my second year in a row. I signed up when I found out I got into the JFK 50 and wanted to get some long races scheduled for training. As the race got closer, I realized I had scheduled it way too close to my half ironman, and didn't leave myself enough time to really build up my running again. Going into the race, the longest run I had done since March was 18 miles.

I'd probably normally be terrified of going into a race undertrained, but instead I was super excited for it. I mean, it's a trail race, so if I got tired, I'd just start walking. Plus, it had really good food last year.

I was planning to run with Ashley, which was a relatively last minute decision on her part. I was pretty happy she made it, since it meant I didn't have to listen to my own thoughts for 31 miles. Kara and I ran it together last year, but since she's currently busy spawning, she had to stick to volunteering this year. Still, we got some good treatment at her aid station. Having a blogger volunteering is great because you know they'll be on top of photography.

Saturday we drove back from Tennessee, I went to work, threw some random stuff in a bag around 11pm, and set my alarm for 4:15 Sunday morning. You know, the ideal race prep.

Rosaryville is a super small race, about 80 people doing the 50K, and less than 200 overall (there were 3 other race distances). I love small races. The race began at 7, and arriving at 6:30 gave me plenty of time to park, get my bib, use the bathroom twice, and stand around chatting. Already having done the race last year gave me an extra leg up - I didn't get lost on the way there and have to call Kara in a panic. I don't even remember the last time we did a race together without that. 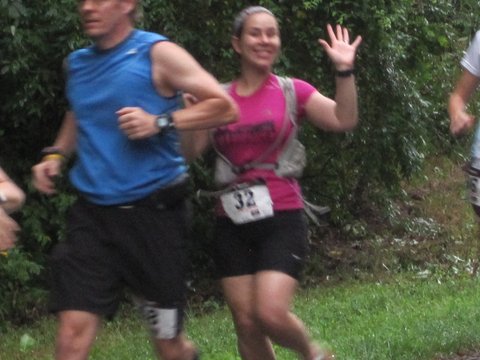 We ran half a mile or so through the paved park roads and then hit the trail. Rosaryville has something like a 10 mile loop through the park, so 50K runners do the loop 3 times. We were on the trail for maybe 5 or 6 seconds when I got stung by a bee.

The two other times I've gotten stung by a bee as an adult, I've completely flipped my shit. I don't remember what happened as a child, but I can only imagine it was about the same, based on the fact that my reaction to getting shots hasn't evolved at all. The most recent time was on an early morning run in my neighborhood, and I screamed. Like, at the top of my lungs. The construction workers were treated to a blood curdling scream at 6am. If I lived anywhere nice and classy, it may have led to problems, or at least concerned neighbors coming out to check on me, but luckily that's not the case, so I just kept running.

I wasn't sure going into a full on panic attack was the right choice here, so I attempted to remain calm (a true challenge for me), and just stopped for a second to check out the sting. Before we started moving again, a woman behind me got stung in the leg. She said it really hurt, so then I felt better admitting that I was dying from bee sting pain. Once I got confirmation that I wasn't just being a baby, I was ready to continue.

The bee sting really hurt, and I ran for like 3 more miles before I realized that I had Advil in my hydration pack and didn't have to suffer. Despite the traumatizing start, I was having a great time chatting with Ashley. During trail runs, I like to try to ignore the Garmin and just enjoy the run. I guess I was doing pretty well with that because I was shocked when we hit the first aid station - I had no idea we'd already gone 5 miles.

My goals for this race were to come in under 7 hours, and not waste time at aid stations. I think we did pretty well with that. At each one, we grabbed food, filled our water if needed, and then got going. It still could have been faster, but an improvement over my past trail races.

At that aid station, I randomly saw my friend Marie, who manages a Charm City Run (the local chain I work for) and trained me for my first marathon. She joined us for a little while, along with the manager of my store. I get really excited about seeing friends randomly in races.

Again, before I knew it, we hit the ten mile mark, which I had been waiting for, since it has a porto-pottie. I know I was running in nature's bathroom, but since it wasn't an emergency, I figured I'd wait until we were stopping anyway.

This was Kara's aid station, and apparently seeing her made me happy, only in a really creepy way. 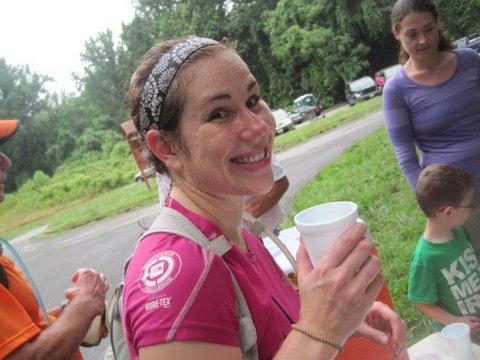 She was working her ass off, and reminded me of how I used to look working at starbucks during the morning rush. A million confused, needy people demanding your attention while you try to do 8 things at once. Volunteering looks hard.

After some Gatorade and Kara's homemade boiled potatoes, we were off for our second loop. 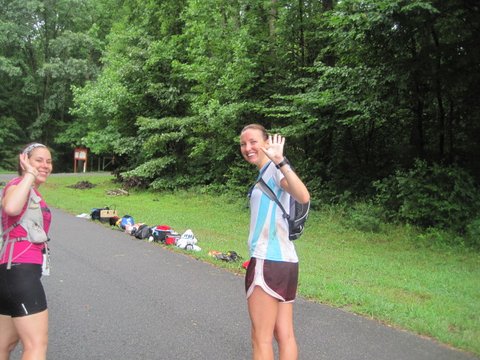 The second loop was pretty uneventful. In trail races, you typically walk the hills, but Rosaryville is nothing but rolling hills. I feel like every time I'm there I'm constantly debating "is this hill big enough to walk up? does this really count as a hill?". I was in front of Ashley most of the race (meaning, I'm slower so it makes more sense for me to set the pace), so I tried to only walk up big hills, and run the rest of the time.

We lucked out with the weather. It was relatively cool, the high was only around 86. The humidity was insane though, we were soaked before we reached the first aid station. There was no relief, since the air was just as soaked with moisture as we were, so all your wet clothes just clung to you. I was wearing smart wool socks, which, in my opinion, are the best moisture wicking socks out there, but they were so wet I could hear them sloshing. At mile 20, we changed our socks, and got at least 2 miles of dry feet, which was amazing.

The third loop was a little rough, especially the second half. We were getting tired, and it was hot. We were getting pretty loopy, but still laughing, so we weren't miserable or anything. A guy at the 20 mile aid station even told us how impressed he was with how strong we were running!

When we exited the woods by the last aid station, a guy stopped us with two fresh pieces of watermelon, and told us we were half a mile from the finish. He was my new best friend.

I had been dreading the last half mile on pavement, because it's all uphill and in the sun, and last year it was so awful that we walked until people at the finish could see us, then started running. It wasn't too bad this year though. 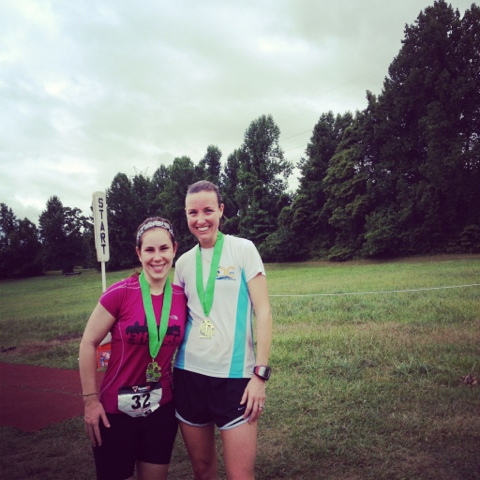 We hosed off (literally), changed clothes, and hung out for awhile with a few other runners that we know through Kara, chatting about the race. They had tons of food, delicious looking desserts, burgers, hot dogs, and vegetarian egg rolls! I had an egg roll and some animal crackers.

Rosaryville is just a wonderful race - the volunteers work so hard, and yet are constantly cheerful and helpful. It's well organized, inexpensive, and, most importantly, has great food, both during and after the race.

My entire hour + drive home I was dreading showering. Last year, at Rosaryville, I experienced the worst chafing of my life, and this year followed suit. I almost wish this were a different type of website just so I could show you. Basically any spot of my body that clothes touched now has a huge red welt. Even parts I've never had problems with, like where the waistband of my shorts hit, and where my hydration vest touched along my sides. I honestly considered doing a shot before getting in the shower.

I know this report is already long, but for once I decided to pay attention to what I ate at aid stations and try to record it. During the race, I ate:

I drank a cup of gatorade or heed (whichever they had) at each aid station (5 in all) and probably 8-12 oz of ice cold coke. This mystifies me, because I don't like coke at all, but during trail races, I can't get enough. I love when the caffeine and sugar hits me a few minutes later. It's hard to really gauge if you are eating enough or too much during the race, but since we got a great time, I guess it worked out.

After my shower of torture, I enjoyed my favorite post race food - Mexican. Eric got us Qdoba, which is perfect, because their chips are so deliciously salty. Then I busted in to my birthday present from Nicole.

I don't ever remember being so tired after a race. Titanic was on TV, and I didn't even stay awake until it ended at 8pm. I was in bed, passed out by 8:30, and slept until 6:30 this morning.

So today, for work, I'm going on a teacher field trip, which includes kayaking. Not sure how that's going to go. My muscles aren't really sore (typical for trail races) but my chafing is making moving so painful.
Posted by Alyssa at 8:11 AM