I gave up dessert for a week for nothing

AKA the Maryland Half Marathon recap, AKA I'm cursed at half marathons, AKA the post where I whine more than necessary.

It's no secret that Kari and I have been partners in dessert addiction. When she told me she gave up dessert two days before her huge PR in her half marathon last weekend, I decided to follow suit. Therefore, I've been chocolate free for seven torturous days now.

It gets even worse. I got a last minute text from a friend I hadn't seen in awhile last night, telling me to meet her at a bar about a mile from my house. Despite walking to the bar, I resisted the siren's call of delicious liquor, and chugged water in anticipation of today's half marathon. I should have just boozed it up, since it turned out that one PR in a weekend is my limit.

At the race, I was flying high from my 5K PR yesterday, so I lined up with the 1:45 pace group. My current PR is 1:50 on a flat course, and today's race is notoriously hilly. Apparently the elevation chart wouldn't load last time I posted it, so here it is.

However, the weather was cool, overcast, and rainy, the race offered pacers to help me, and I was feeling good. I was a tad optimistic.

I thought pacers were supposed to get a group together and motivate you, but the 1:45 pacers seemed annoyed when I asked what their plan was and basically ignored me. Which turned out to not really matter because after a 7:49 first mile, I started to fall behind. By the mile 2 marker, not only had I given up on my 1:45 goal, I'd started to wonder about that whole "finishing the race" goal.

I spent the next three miles mentally ripping myself apart for being too slow, going out to fast, and overall failing at running while struggling up the soul crushing hills. I tried to dig myself out of the "boo hoo woe is me hole" but I wasn't terribly successful. Right after the mile 5 marker, I decided that every mile where I didn't get passed by the 1:50 pacer was a good mile, since I still had a chance of PRing, albeit a snowball's chance in hell.

Not even a minute after I told myself this, I heard a nice cheery voice of a woman trying to motivate a group of runners up the hill behind me, and I knew it had to be the 1:50 pacer.

The 1:50 pacer blew by me. A local news anchor in my running group was with them and tried to get me to pick up the pace and stay with them, and even with help from a celebrity I couldn't do it! My legs felt completely dead and my heart rate was through the roof.

That was pretty much the final nail in the coffin that the PR was out for this race. At first I was upset, but by mile 8, I got over it. The pressure was off, and my new strategy was that this was just a 13.1 mile tempo run for my half ironman training. With that attitude, I cheered up and settled into a comfortable pace, and the next few miles weren't too bad. The last 2 miles, as you can see, are almost all uphill and we were running around a giant cul-de-sac, but I had regained my ability to handle life by that point so I dealt with it. The excitement of being almost done with this hilly hell was no small factor.

As soon as I got my medal and space blanket I rushed back to the last .1 mile to watch for Carolyn. She was dead set on getting a sub 2 hour half marathon and had trained really hard for it. I spotted her right away, looking like hell. I mean that as a compliment, as in, she was clearly pushing herself as hard as humanly possible and it showed. The clock said 1:57, so I cheered my ass off and my mood did a complete 180 because I was so excited for her.

After the race, I found myself yet again in soaking wet clothing in unseasonably cold weather. The race packet had a coupon to a coffee shop, so we walked over there and the best thing to happen all day occurred - I was finally about to indulge in some nice hot coffee. 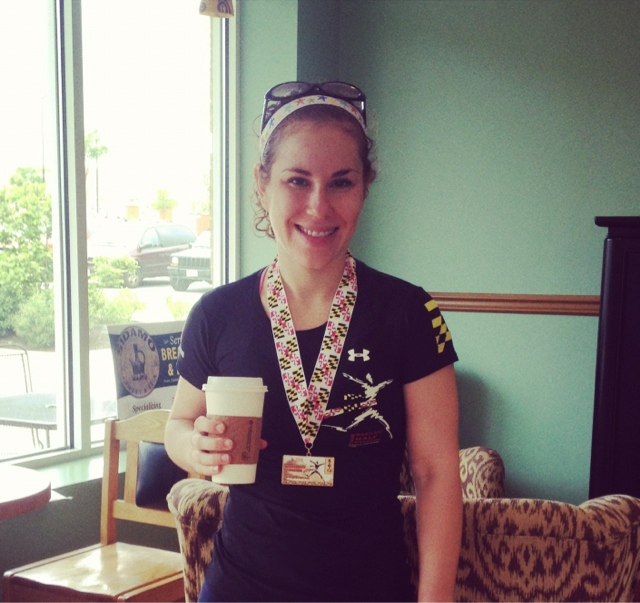 All in all, it was a half marathon fail, but I got in a faster-than-usual run and a little extra training for the HIM.

Lesson learned: I'm officially done with pacers. I've tried them twice, and both times have resulted in horrific races (although this time it wasn't exactly their fault). My average heart rate was 178 and I'm clinging to that as an excuse that I wasn't a total slacker.

Of course, now I need yet another redemption half marathon, because I WILL break 1:50 someday!

Oh, and I stopped for frozen yogurt on my way home, and it's currently waiting in my freezer to be devoured.
Posted by Alyssa at 4:52 PM