This morning I ran the ALS Fiesta 5K. I haven't ran a serious 5K in awhile - I've done a couple that I ended up not having to pay for, but I just rolled them in to longer training runs. I'm much better at longer runs. The whole "run until you want to puke for 3.1 miles" thing scares me to death.

I was on a huge fundraising team of over 90 people, which is the best way to run a race, because all sorts of total strangers start cheering like crazy for you as soon as they see your shirt. I went with a huge group of people to the race, including my GORUCK girls Jackie and Colleen. Colleen is training for like 12 more GORUCKs, so she ran with her bricks, and still did a 30 minute 5K! She also ran in a mumu, just for fun. 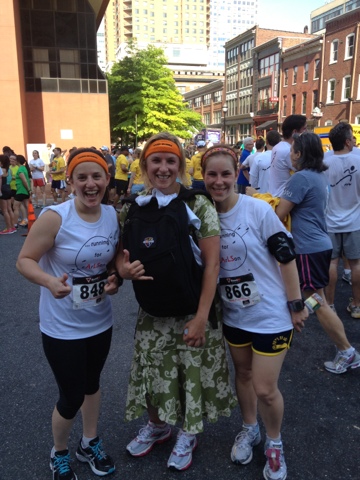 My previous 5K PR was 24:21. I knew I had no choice but to PR at this race, mainly because I think 5Ks are a rip off, so this would be my only one for another few years. I actually warmed up for about 3/4 of a mile, and warm I was. The team shirt was cotton, it was already 80 degrees and something like 110% humidity, so I was pouring sweat before the race even began.

Public Service Announcement: If your goal is to break 30 minutes in a 5K, I applaud you, that's a wonderful goal. With this goal in mind, the front of the race, 2 rows behind the start line, is not where you line up.

Despite a little crowding at the beginning and the ungodly heat, I managed to pull out a 22:46. I randomly told some woman at the start that my goal pace was 7:30 (I hadn't even thought about it before she asked me) and my average pace ended up being 7:26. I said the 7:30 out loud, so it counts, and I officially beat my goal.

After the race I ran a little over a mile for a torturous, shuffling cool down, bringing my total for the day to 5.2 miles.

We went back to Jackie's house and showered. The fundraising team I was on rented out a room at a local Cuban restaurant and hosted a huge party.

Now, with a half marathon on my schedule for tomorrow, I had no intention of drinking today. However, several things came together and created a perfect storm, forcing me to imbibe. 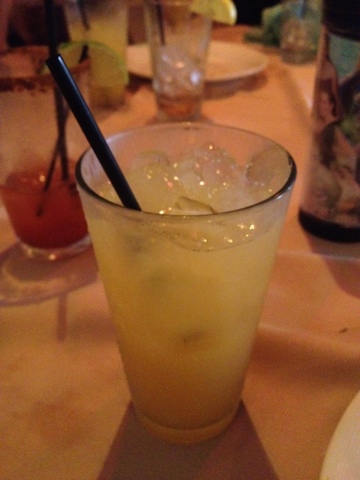 Half marathon or not, if I had turned down free mimosas when my car was safely at home, I would have had no choice but to punch myself in the face. They hit me pretty hard too. FYI - a buffet at a Cuban restaurant is not ideal for a non-meat eater like myself. Fruit, cottage cheese, and mimosas turned out to be my lunch.

Beware - the following pictures WILL make you want to quit your job and move to Baltimore immediately. Our guest room is ready.

A huge event in Baltimore is the Kinetic Sculpture Race. Teams work for months, or even years, to create sculptures that are able to travel both on land and in water. 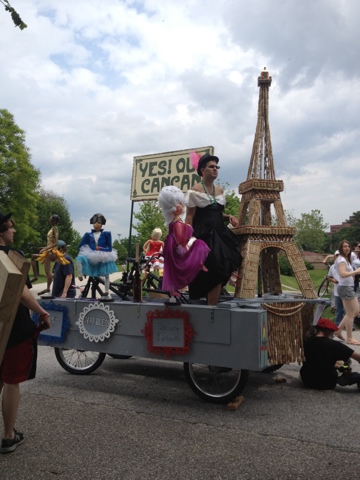 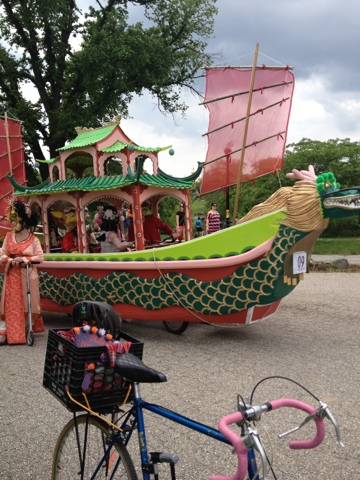 Colleen and I went to Patterson Park to watch as the sculptures took turns attempting to gain speed and get through a section of deep mud. 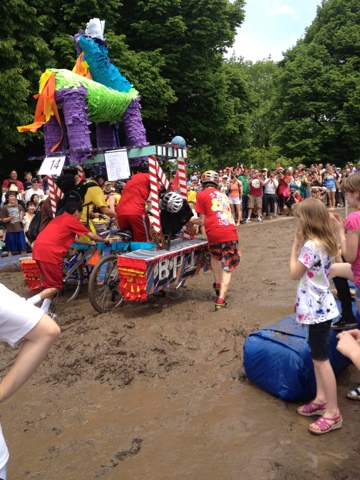 The costumes are no small part of this event. Even spectators dress up.

Tell me you wouldn't want to watch this heated competition in person.

My half ironman next week is actually also called the Kinetic race, so when I tell people I'm training for it, they think I mean I'm spending weekends in someone's garage duct taping random items to a bicycle.

Anyone who has endured long enough to still be reading this post might be wondering what the title is all about. Once again, I'm going to do something I swore I'd never do. I think I need to call this past year the year of "never say never".

Kara is notorious for peer pressuring people into signing up for races. She teamed up with Jessica and somehow managed to convince me to enter the JFK 50 lottery. The lottery opened on May 1st, and it's totally old school, you have to mail in your application with a check, proof of a qualifying race, and a SASE (self addressed stamped envelope). The turnaround for all that was shockingly quick, and this arrived in the mail yesterday. November 17th, I'll once again be attempting the 50 mile distance. I'm really excited to have it actually be 50 miles this time.

I know this is a really played out question, but I'm really curious - what's everyone's favorite race distance? Mine is the marathon for sure!

Do you think it's wrong to turn down free liquor? It should be illegal.