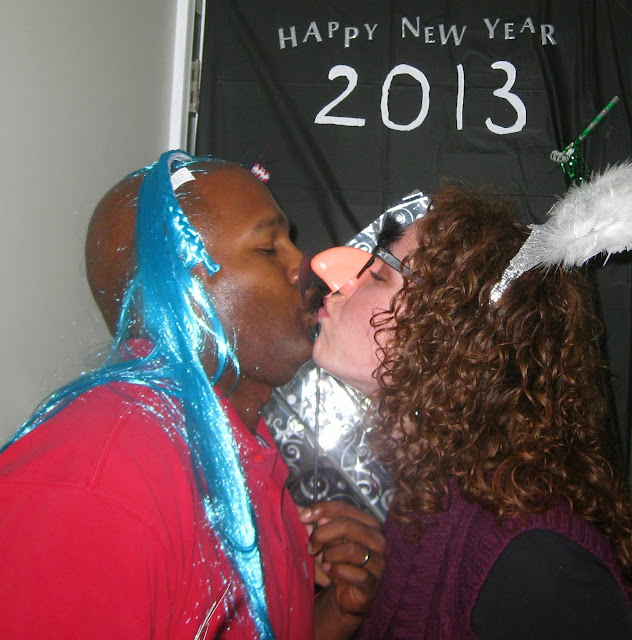 ﻿
My mom reminded me that I really need to savor today, because come midnight, my most prized possession will no longer be relevant.
Alright, now let's go through 2013 month by month so I can list everything that happened and then explore my 2013 resolutions in the same fashion!

Or not, because no one cares.

Actually, I couldn't even find my New Year's Resolutions. I wrote them on a paper plate sometime after midnight last NYE, but they had been replaced by Christmas cards. My memory is absolutely terrible, but I was able to infer that I had a temper tantrum  about failing at all of them in early December and recycled the plate.

I didn't fail at all of them though (just the major ones). I did PR in the marathon!

BREAKING NEWS: I took a picture of the plate and posted it in my PR post. I succeeded at another resolution - I cooked more meat!

Also, for the first time, I was involved in a group resolution. To see Ke$ha in concert. With these guys.


Well, not my sister (black and white dress), but it was the first picture of the five of us I found, and she has already seen Ke$ha, so we're good.

Like anything, 2013 had good and bad. If I could repeat a year of my life, 2013 would be scratched off the list pretty quickly. 2012 would be a top contender though, or maybe 2008 when we got married. Or any year in college. I could really get on board with having no responsibilities and most of my friends living within a mile radius. It's hard to believe blogs didn't even exist then, and I have to rely solely on actual memories and pictures taken with film to reminisce.

I got started on my big 2014 goal yesterday. Sort of. I began my 100 miler training plan with.....wait for it.....a six mile run! I know, it kind of sounds like a run someone might do any old day. But it wasn't. It was on the training plan.

I say sort of because I forgot to add it to Daily Mile, so it technically didn't even happen. I was really busy getting ready to go see Catching Fire again, and if you were wondering, it was just as spectacularly wonderful as it was the first time.

Goodbye 2013. Welcome, 2014, which brings the Divergent movie and Game of Thrones season 4!

What year of your life would you most want to repeat and why?

What are you most looking forward to in 2014? Probably in real life it's my sister's wedding, but reuniting with some of my favorite fictional characters is up there too.