December: a glorious month of laziness


If I thought the internet only had limited information on training for 100 milers, it had even less on what to do in the interim period when one is recovering from a 50 miler, and preparing to train for a 100 miler. Like, none.

So, I'll just make it up as I go along. Last week, I ran about 33 miles. After I signed up for the race early Sunday morning, I thought about the best way to spend my time before true training begins. I decided not running was the way to go.

Sounds counterproductive, right? And it may well be, there's no way of knowing, and by that I mean there's no solid google search results at this time. Anyway, I have my reasons.

After the Stone Mill 50, I had some aches and pains, which is to be expected. I had a fairly serious freak out about some foot pain, but thankfully a week off from running seems to have solved that. But I'd really like to ring in 2014 and start training completely ache and pain free, and really, truly recovered from Stone Mill.

More importantly, I'm lazy. I'm not an "adrenaline junkie" who needs to run every day to live life without a rage stroke. I had a good experience at Stone Mill, and I'm looking forward to training for the 100. The last thing I need is to get sick of it after 3 weeks and be burnt out by Martin Luther King Jr. Day.

To avoid that, I decided to cut way back on the running in the meantime. I want to miss it and really look forward to it. It's also really crucial for my mental state to experience a life where I don't devote significant amounts of my free time to exercise. I'm aiming to meet the general guidelines to avoid heart disease, which I think is something like 5 hours a week (I just pulled that number out of thin air but it sounds pretty reasonable). The most important thing is not having to get up at 5am and run in the dark. I needed a break from that.

I know what you're thinking. Doesn't this bare minimum approach to exercise put me at risk to gain the dreaded holiday weight?

Yes. It does. Especially when you factor in just how good at cooking my mother and mother in law are. It's basically a done deal. But no worries, I've already snagged that coveted MRS title, so we're good there.

This approach does put me on thin ice, because it's easy for me to spiral down into doing absolutely nothing. I don't want to start my training completely and totally out of shape.

I found the perfect solution.


It's really hard to come up with excuses not to get off my ass for only 25 minutes to do a workout DVD. Except today, I nailed the excuses. But Monday, Tuesday, and Wednesday, I did it. It was freaking hard. Plus it can't be bad for me to work some non-running muscles. Running 100 miles probably requires some core strength, right?

I also dragged this guy out of storage and even pumped the tires. It's all ready for tomorrow morning. 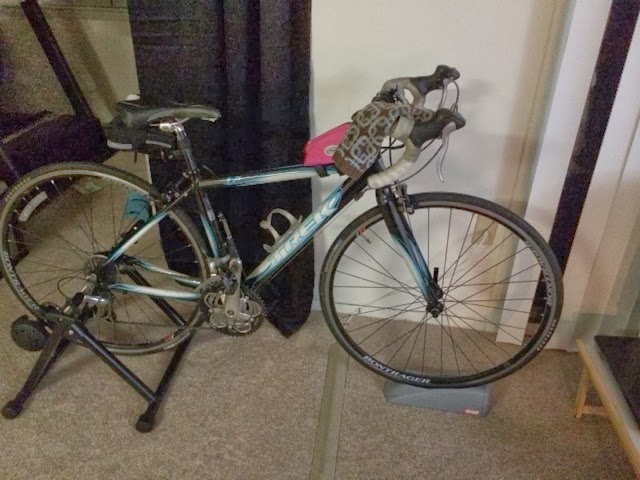 Except that's been canceled, because I have to stay up until 11pm to watch the abomination NBC is calling The Sound of Music Live. I'm a pretty serious fan of the movie (I watched it approximately one million times as a child), and this version is just as horrific as I expected. It is making Twilight look like a cinematic masterpiece.
However, the live tweeting is hilarious. It's the musical theater version of Sharknado.
﻿
﻿
Confession: I finally watched the movie version of Les Mis this week. Twice. And by confession, I mean "reasons my week has been awesome". I have at least 3 songs from the Broadway version on all my running playlists. It's on HBO again tomorrow. I may watch it again. No shame.
Any other (free) workouts you would suggest for my month of laziness?
Who else is watching The Sound of Music Live? Thoughts?
Posted by Alyssa at 9:43 PM