The apocalypse has happened. I did a workout so hard that I lost my appetite.
I am not one to lose my appetite. In college, when I found another girl's bra in my boyfriend of three years' apartment, I didn't miss a meal. I ate my way through a week of swine flu.
When people say things like "I was too upset to eat" or "It's too hot to eat", I don't really understand it. To me, it's sort of like saying "The price of tomatoes is too high to jump on the trampoline". It's linking two completely separate, unrelated things in a cause/effect relationship.
Sure, I've been too sick to eat after some hot, hard races, but you expect to have some pain after races. Plus, then you often have a medal and new shirt to dull the pain. This was just a Tuesday workout. Turns out 8.5 miles at the track (7 of which were intense speedwork) the night after a 20 mile run is a horribly bad choice.
The workout: one mile warmup, then start the speed sets. Run a 400 (one time around the track), rest one minute, run another 400, rest one minute, run a 400 and go directly into an 800, rest one minute. I did FIVE sets. I got volunteered to be the timekeeper for our pace group, because the workout itself wasn't enough numbers.
This workout was no joke. My 400s ranged from 7:15 to 7:27 average pace, with the fastest one at 6:54! The 800 pace was a little slower than my normal goal 800 pace, ranging from 7:55 to 8:06 average.
My legs were killing me by the end, and it's pretty rare these days for them to get sore while running. I got home and stretched/foam rolled for nearly half an hour, then showered and got dinner ready. I could only take a few tiny bites of my delicious veggie and falafel bowl. I finally put it away and just drank my powerade zero. Seriously, unheard of. I'd eaten a salad for lunch around 2:30, and now it was 9:30 at night and I couldn't get anything down.
I was more annoyed because I guessed that meant a day of insatiable hanger the next day, today, which is the first day of school followed by a three hour grad class. The first day of school is stressful enough without being starving all day. I managed to eat a banana and a piece of toast before I gave up and went to bed. We still had this in the freezer: 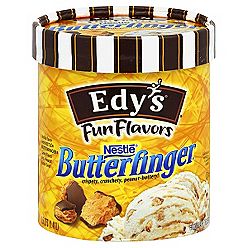 It didn't even sound appealing. We also had chocolate milk (the super sugary pre-mixed kind) and that wasn't working for me either.
Now it's time for the first day of school! I hate the first day so much. It's chaotic, you don't know the kids' names, no one knows where they are supposed to go, you are supposed to teach all the rules and that's super boring, etc, etc. I'd much rather skip ahead to being a few weeks in. This will probably be the best first day I've ever had. Moving up from first grade to third grade, I've already taught most of the students in my current class, and  they're pretty awesome.
Kara sent me this, and it sums up how I feel pretty well. 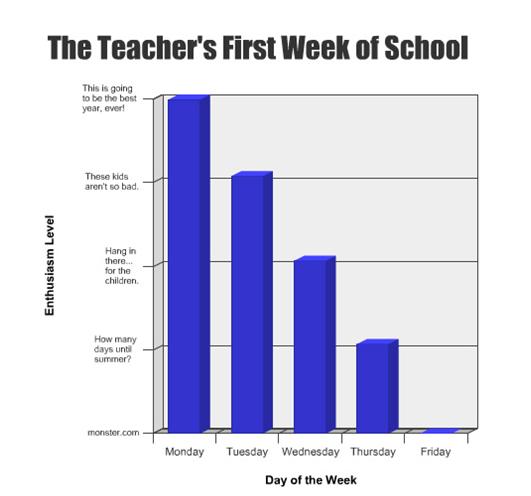 I'll never complain about an extra two hurricane days at home, but today is not the most ideal day of the week to start school. I normally stay until about 6 or 6:30 organizing the supplies kids brought in, replanning all the lessons I planned now that I've met the class and realized they won't work, etc. Today I have to leave as soon as I dismiss the kids at 3:45 for class. Lame.
Plus I washed my hair Monday night in anticipation of a Tuesday start, but now we are starting Wednesday. Think I was going to wash it again last night? Sorry, kids. You get the teacher with the dirty hair, who can barely stand up, and is housing granola bars every time you start some independent work.
Posted by Alyssa at 6:38 AM