My first triathlon (as long as none of the three events are canceled like last time) is this Sunday  - which means this week it's time for some last ditch effort biking to get ready. Sort of like when you brush your teeth really good right before you go to the dentist.
There's no last ditch effort swimming, because the YMCA pool is closed for cleaning. And, let's be serious, my swimming training was a joke. Goal - don't drown.
Last night I met Lily for a 15 mile bike ride/3 mile run on the BWI trail, which goes around the airport. I'm entering Kari's giveaway, which means I needed to take before and after pictures. Since it was a brick workout, I took before, middle, and after pictures. It's really hard to take self timer bike pictures when you are trying to fit in 15 miles before dark, so the pictures suck, deal with it. 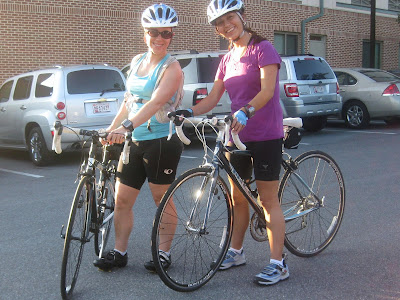 On the run, we ended up with a 9:06 average pace, which I think is pretty good following over 15 miles on the bike. This workout further solidified my two rest days a week plan, because I felt great during it. I'm looking forward to having an extra rest day, until I actually start taking it and realize it's an extra "do boring grad work" day.
Speaking of the training plan, I'm usually a total slave to training plans and hate to vary from it, even by a mile. But this whole 50 Miler thing is totally uncharted territory, so I talked to my friend Mike for advice, who's done the JFK 50 Miler something like 3 times. He recommended replacing some runs with bike rides, for example, if the training plan calls for a 10 mile run, do a 15 mile bike ride instead, just don't half ass it.
Despite the fact that Kara posted this article about crosstraining on Twitter yesterday, which basically says that biking won't do crap to help my running, I want to try Mike's plan. He's run a ridiculous amount with his knees still intact, and I'm insanely paranoid about getting injured. I'll start by replacing this Sunday's 10 mile run with a sprint triathlon.
Today is speedwork all around. I met the triathlon club with Lily this morning for crazy hard bike sprints (and the fact that we were the last ones done - even though we didn't even have time to do the whole workout before work - does not negate the hardness). Tonight I'm headed to the track with my marathon training group for more tortuous partner 800s.
Even though this is technically week 2 of 50 Miler training, I feel like it doesn't really start until next week - mainly because I'm still partially focused on the triathlon this weekend, and next week I get the challenge of fitting it in around a full time job. Good thing my husband is starting grad school, or I'd worry I was neglecting him or something.
Posted by Alyssa at 4:29 PM