My friend Casi started an #Irene #pro and #con trend on twitter. I love lists, so let's look at some pros and cons of this week.
Pro - All sorts of stuff is hung up in my classroom and I have some lessons planned for the childrens' arrival next week.
Con - Doing all that crap prevented me from blogging all week. Jobs are so lame.
Con - Tuesday's run was hill repeats.
Pro - My average pace was MUCH faster then I expected (9:03).
Pro - Wednesday's bike sprints took place around this lake while viewing this gorgeous sunrise. 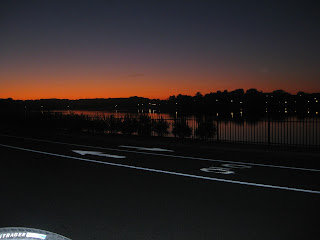 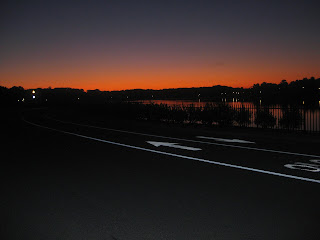 Con - Flags at every quarter mile let you know when to start sprinting. I was apparently so slow that my last time around had no flags because they'd already been removed.
Pro - I ran 3 miles with a superfast girl after the sprints and she pushed me to be speedy like Kari.
Con - She's not available to run with me all the time, so I'll be back to my slow(er) self.
Pro - Running 9 miles Thursday morning with Mike.
Con - We ran on some path and it was pitch black and I thought I was going to die.
Here's where we get into some serious cons.
Con - Irene is coming.
Pro - We already had an emergency kit and restocked it yesterday before the complete craziness hit the stores today. We have plenty of water, nonperishable food, batteries, and chocolate now.
Con - My ten mile race Sunday was canceled.
Pro - Kara is a genius and told me to do the ten miles today.
Con - I was too dumb to think of that idea myself. Also, now my legs are tired. And I have 14 miles scheduled for tomorrow morning.
Pro - Sunday is my new rest day, so best case scenario, I lay on the couch and watch the hurricane and play board games with Eric.
Con - It's a lot more likely I'll be panicking about flooding with no power and water and accidentally eat all my chocolate right away instead of rationing it.
Pro - I've spent so much time freaking out about the hurricane that it totally took the place of my normal first day of school panic that usually lasts the entire teacher preparation week.
Irongirl photos are up! Let's take a little look at those to get everyone's mind off that super bitch Irene.
Pro - I finished the race. 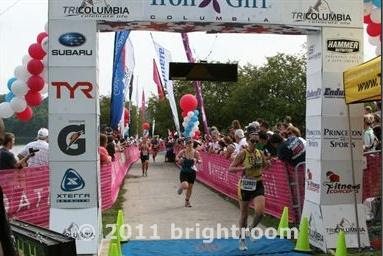 Con - I run like a weirdo, wobbling to the side or something. Pro - I stopped my Garmin right at the finish line. 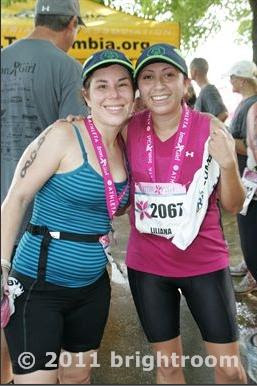 Pro - We got a cute finish line picture! 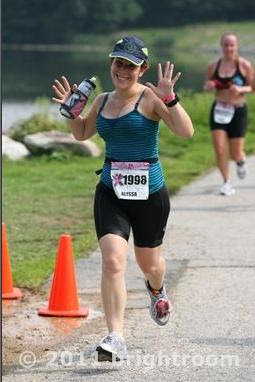 Pro - Sometimes I saw the cameras. 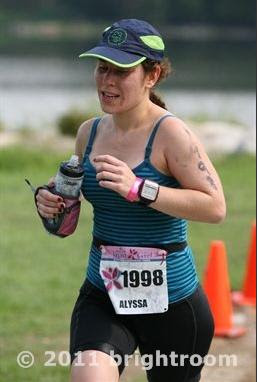 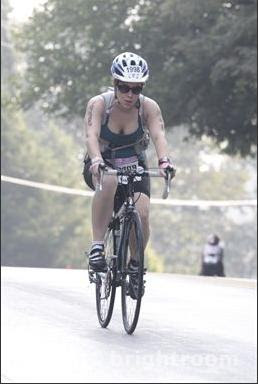 Pro - I totally look hardcore on the bike. 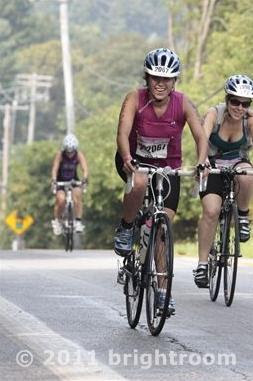 Pro - They obviously couldn't see individual numbers during the swim, so they included a picture of everyone. 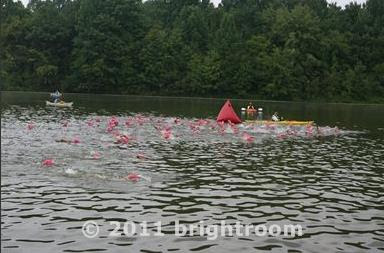 Con - Pretty sure that's not my wave. Also they took a picture of me coming out of the water and that's the one I actually wanted to see and it wasn't there.
Con - We don't own a home.
Pro - We don't own a home for Irene to damage. Any damage to our apartment - totally not our (financial) problem.
Posted by Alyssa at 9:05 PM