Yesterday I met my friend for an early morning run. We picked a random stop about halfway in between where we both live, parked at a blockbuster, and headed out. We had barely gone a tenth of a mile before I felt something slam into my back. I turned around and figured out someone had thrown a full bottle of water out of their car window at me! I don't mean like they tossed it gently, they whipped it at me! I can't imagine why someone would do that, but doesn't it have to be on purpose? Why else would you throw a full bottle out your window at 530 in the morning, and throw it that hard?? I never really bruise but my back still hurts this morning! This is a true example of a hate crime against runners!

Crazy Story #2: You take this

and hit it with this 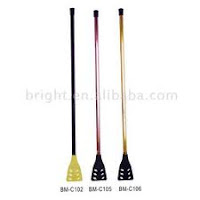 and that equals this: 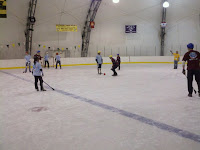 Broomball! I played my first broomball game last night! You use the equipment above, on an ice rink, wearing just sneakers, no ice skates or anything. My team, the Forking Iceholes, is the maroon (although I was not playing in this pic). I was so nervous about falling and ending my running career but the game was so much fun. My friends and I ended up joining a really experienced team who needed players. Considering I am the least athletic person and avoid all sports with balls like the plague, I can't believe how much I loved broomball and didn't do horrible! Our team won the playoffs last year and has been playing together since 2003, so another fear was letting them down. They were all really nice and helpful though, and we won! Broomball is the great equalizer for someone like me, because on the ice, everyone is just as clumsy as I am. Eric was the goalie and he did great (although, this is not a shock, since he is naturally athletic and really good at any sport he tries).

Crazy Story #3:
Yesterday I got a text asking me if I wanted to do a metric marathon this weekend, a 26.2 km race. While I tried to do the mental math and figure out the mileage, my friend Mike (I ran the marathon with him until mile 16) said it was his treat. I'm not about to turn down a free race and, more importantly, a free race tshirt, so I texted back that I was in! So now I am getting up at 6am on Sunday for a 16 mile race with three days notice. 6 months ago I would have never believed that I could just decide to do something like that on a whim (and we still don't have proof it will work out). It will be my longest run since the marathon, but I did 10 last weekend, so it's not a huge jump. I skipped my beloved spinning class today to rest, tomorrow I think I'll hit the elliptical, and hopefully that combined with some carbs and hydration will turn into a great race. My plans Saturday night were just a girls night with my BFF Casi to watch SATC2, so luckily that works out great for an early Sunday morning. I guess she'll get all the wine now, but it's all worth it in the name of racing.

Tonight we are celebrating Carolyn's birthday at a great Cuban restaurant with even greater Mojitos (seriously the best ever) so I just need to make it through one more day of work!
Posted by Alyssa at 6:30 AM