Two things I am obsessed with this week:

Really weird huh? I made this corn and millet (haha just typed my maiden name, Miller, by mistake?) pudding last night for dinner.

Where's the picture of it? 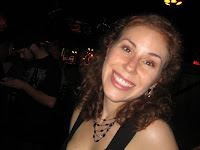 That's about all you're going to get. My face of satisfaction. I ate it all before I could take one. Eric ate one serving. That left three for me. AKA dinner last night, brunch and lunch today. I highly suggest trying it.

What delicious topping did I use? 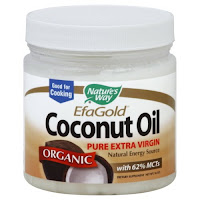 This awesome coconut oil. Which incidentally is the second "c". I got it for the soup I made over the weekend. Jillian said to get extra virgin, so no ruined whore oil for me. I thought it was really weird that the jar said you could cook with it, eat it as a nutritional supplement, rub it on your skin like lotion, or use it on your hair. NO JOKE. Apparently this stuff does it all. I thought to myself "who is going to just sit there and eat a spoonfull of oil?". Um, turns out me. After putting a tablespoon in the pan to cook with, I tried some. Tastes like heaven. It's solid at room temperature, and you just have to try it. I've been cooking with it nonstop and having a little bit each time. I also used it as a topping to my corn pudding and it was like frosting. Yes, I eat weird foods. Don't mock me (to my face). Whatever awesome health benefits it gives you, I am getting times 20, and you aren't, so there. 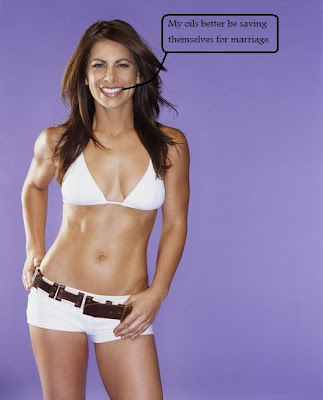 Not quite sure how I did a whole post this morning and left out this little gem....

I just signed up for a race that involves leaping over fire, crawling under barbed wire, and 10 other crazy events, in addition to the usual running (3.11 miles). It's called the warrior dash and it's on May 22nd. I have already convinced four friends to sign up and two more are pending. The fact that I may have convinced 6 people to do something crazy and life threatening (two are engaged, one is getting married six days after the race!) means my race peer pressuring skills have really improved. I'm getting really proud of this talent.

My race schedule for 2011 is getting pretty exciting now that it has expanded from just those boring races involving only running....

Hopefully this will encourage me to do some upper body work? And to stop counting things like vacuuming or cleaning the bathtub as an upper body workout? Although according to this article cleaning the bathtub burns exactly 249.92939587 calories. Seriously, I googled it then cut and pasted that number. If only it burned 250 I could consider it a full workout....so close....

Time to get dolled up for my hot date tonight! It includes all my favorite things - grocery shopping at Wegmans, eating, and movies with lesbian sex. The last one is new for me but how could it not become a favorite?
Posted by Alyssa at 3:29 PM