7 HOURS!! 7 hours with children is all that separates me from 10 glorious days of long overdue freedom. If I can make it through.
Yesterday I was totally not feeling my 6 mile tempo run. After racing Sunday, speedwork Tuesday, and Body Pump Wednesday, my legs were done. I didn't slow down, I kept the "comfortably hard" pace, I just felt like it was one of those days where "comfortably hard" was going to end up way slower than usual. I was pleasantly surprised to see my four tempo miles were 8:32, 8:36, 9:00 (didn't love this one) and 8:45.
Then I headed to work for a field trip to the Maryland Science Center. I really wish I could enjoy field trips more, because they are fun, but I honestly get such bad anxiety about them that I don't have that much fun. I really fear losing a kid or having a medical emergency (which is a real fear, I've had at least one kid with serious health problems in my class every year).
I did manage to get a little fun in though. 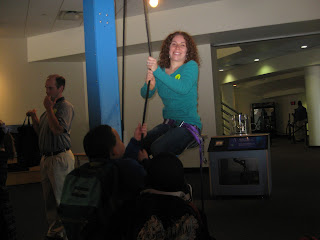 All children were returned to their parents in the same condition they were given to me in, so I still had a job and was not in jail at 3:30 and I could relax. I went to yoga with Eric last night as an extra de-stressor. It was my first yoga at the YMCA and it was tough. My legs and arms were shaking almost the whole time.
Tonight I have the best plans ever to kick off spring break. My running buddies Jackie, Lily and I have been discussing our love for ethiopian food on runs since like February. We are finally getting together for a girls trip to a local hole in the wall Lily has been to (Eric and I have searched and haven't found any Ethiopian food in Baltimore, so this is super exciting.). 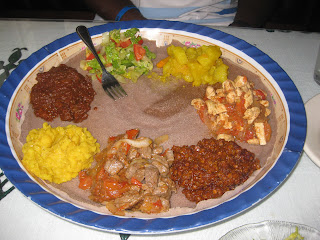 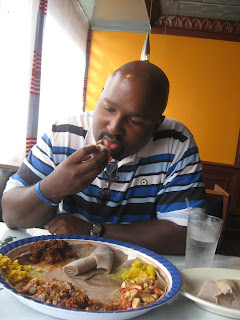 If you haven't tried it, seriously, go. You use bread to eat your food, then eat your bread. It significantly superior to forks, those Ethiopians know what's up.
After that we're having a sleepover at Jackie's. One of my favorite types of wine has been chilling since yesterday.

I made these amazing marshmallow blondies. 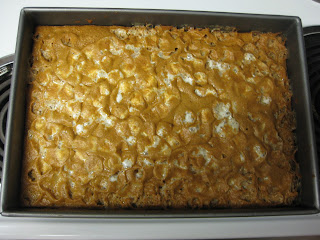 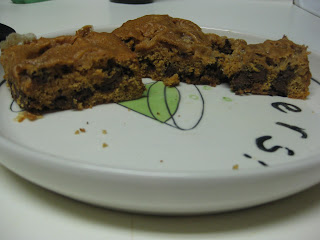 It's the perfect storm of awesomeness. And, of course, we are going on a run downtown tomorrow, my favorite place to run ever. I have another day of awesomeness tomorrow (yes, I know I just used that word, but it's really the only way to describe it) but I'll save all that so I have something to post about tomorrow night.

When making baked goods, it's totally normal to put them in the oven, purposely not wash the bowl or mixer, go to yoga, eat dinner, then sit and lick the batter out of the kitchenaid mixer for first dessert while watching The Office, right? In my defense, I did not eat any dessert on Mon, Tue, or Wed, which is close to a personal record. On an unrelated note, Will Ferrel was hilarious on The Office. 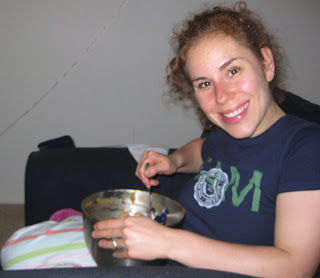 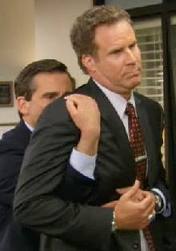 What is your idea of a perfect girls night (sorry male readers, but as far as I know you only comment to me on the phone or gchat, so.....). Up until a few years ago it was a wild night out, but now I love just hanging out at someone's house, where we can actually have a conversation, strangers aren't bumping into me, I can pay $10 for a bottle of wine instead of a glass, and I don't have to stand all night.
Posted by Alyssa at 7:35 AM