It's back to work today and it's honestly easier to get up when the sun is out and the birds are chirping. I even said "good morning" to Eric instead of just sobbing uncontrollably.
I actually made an "Easter" dinner when our friends Andrea and Ed came over on Sunday. My lunches and snacks at work tend to cause my coworkers a lot of ....curiosity, so I was pretty nervous about having friends over for dinner, or basically anyone who is not family or a long time BFF. Andrea was following the rules for passover (essentially no bread) and I don't eat meat, so it was a bit of a challenge. I saw Smoky Mexican Lasagna on Kari's blog and immediately started drooling based on the name, so I made this recipe, using corn tortillas instead of noodles. I was a little nervous about peeling tomatoes since I've never done it. Apparently it involves boiling them and then putting them in an ice bath, but since I'm now a pro at ice baths, I figured I could guide the tomatoes along. 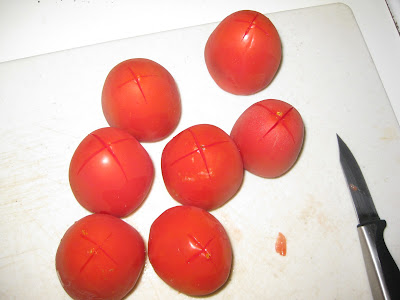 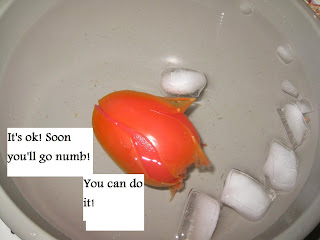 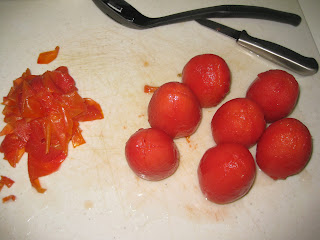 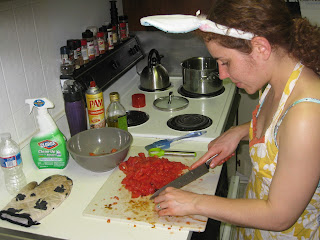 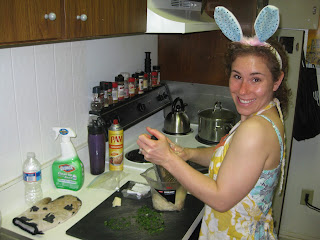 I'm a huge cheese snob. I refuse to buy the shredded cheese in the bag, and rarely even buy the low fat kind. 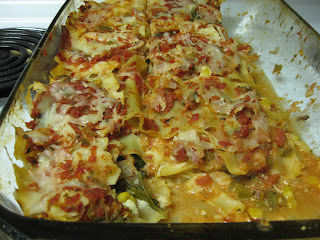 Clearly I forgot to take a picture before we dug in.
It came out delicious and Andrea conquered the challenge of making a flourless dessert by combining peanut butter, melted chocolate, sugar, and egg and baking it. It was basically a zip lock bag full of deliciousness. We also got to use our Easter straws from our basket from my mom. 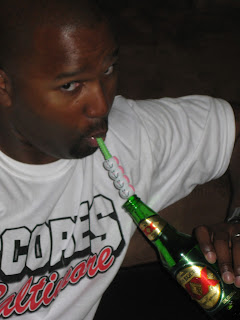 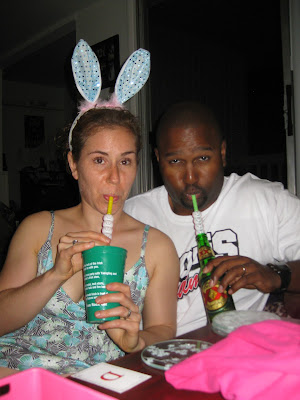 Yesterday I attempted to go to Body Pump but found out they had changed the schedule and it was now Body Sculpt. I'd been wanting to try that class for awhile, so game on. 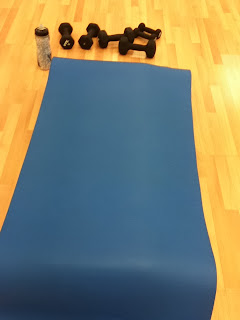 OH MY GOD I thought I was going to die ten minutes into the class. You do 4 minutes on each body part, there's no breaks like body pump, and the instructor decides on which moves you do (not like body pump where they have to follow a script to music). IT WAS ROUGH but in a good way. I'm surprised I can move my arms today.
I went back to the Baltimore Area Triathlon Club bike ride. I think the instructor realized we were a little more "beginning" than she had previously thought. She brought three other expert cyclists and we had a little class on gear shifting, then practiced on a 4.5 mile ride around parking lots with NO traffic. 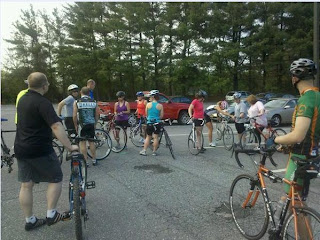 Can you spot me?
In my class, the "zebra" group is the low reading group. Let's just say I was in the zebra group for biking. BUT there were some new people and I wasn't the slowest anymore! The instructor even told me to try to catch up to the other group at the end and I did it! I'm sure I'm the only biker that passes people going uphill and loses the group on the downhills (loses as in, I'm too slow to keep up). Eric had his eyes dialated and claimed he couldn't go because "light hurt his eyes" and he "couldn't see", so I was on my own. I guess it's a good thing since the triathlon is all women so unless he's going to sneak in dressed in drag I better learn to ride without him. I am proud to say I reached my goal of not crying during the bike ride.
When I got home we did our 15 minute workout which I'll refer to as "Operation Pull Up". That's two days in a row, a personal record! My arms were shot after Body Sculpt but I did my best.
Do you get nervous cooking for others or having people over? Do you have a "go to" dish?
Posted by Alyssa at 7:36 AM