I finally got my training plan for the 50K! I was almost as excited when I got a text saying that it had been sent as I was when I came home from a 19 mile run in the rain to find that a cheesecake sampler had arrived at my door.
One major difference between that and a marathon training plan was that after each long run, is another semi long run, for example a 20 mile run followed by a 12 miler the next day.
So I decided to follow up yesterday's 14.6 mile run with a 10 mile run today. It was sort of weird last night going through my long run ritual (ok, mainly not allowing myself to have wine with dinner) for the second night in a row.
Today I had already signed up for the Port to Fort 6K race (about 3.7) miles, so Lily and I met up before the race to crank out an additional 6. In my experience, attempting to run extra miles before a race is destined to turn into speedwork, as you will find yourself running late for the race start without fail.
We sprinted the last mile to arrive at the 9am race at exactly 8:58 am, which led me to forget to start my Garmin over in my mad rush to eat a banana and set up my ipod. 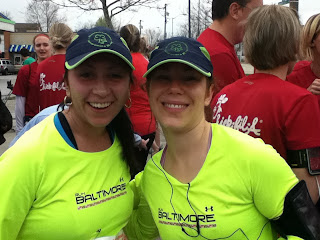 How cute are we in our matching outfits???
I was really mad when it turned out there was no start line, obviously no chip timing, and basically no way to find out my actual time since we were in the back with all the strollers, so we started way after the official start. At least that's what I'm assuming, since there was absolutely no "start", just the crowd started moving and when it thinned out a few people started running. I am all about everyone getting exercise and I think people walking and jogging with strollers in races is FANTASTIC. Just not when they are IN MY WAY.
My Garmin was RIGHT on the mile markers, which was shocking since I just randomly pushed start at some point in between walking with the crowd and sort of jogging with the crowd. It's probably actually way off since I was weaving like crazy, but oh well. As best I can tell, my Garmin time was about 30:38, and couldn't find any sort of results online, so I guess that's my time! I wasn't sure about pushing it after running 6 miles at a decent pace, but I think I did pretty good. The last 3 miles of the ten total we did were:
8:19
8:03
7:59
During the last little bit I saw the ONLY stroller that remained in front of me and I sprinted like crazy because my one goal was no strollers beating me! The last .11 was at a 6:38 pace and I beat the stroller!
After some random post - race food I rushed over to Carolyn's (less than half a mile from the finish) to shower. Eric, Casi, and my friend Andrea met us there and then we all headed to DC to see the Cherry Blossom Festival.
We ate lunch at Ben's Chili Bowl, an apparently famous restaurant that has been on food network and Obama's been there and stuff. 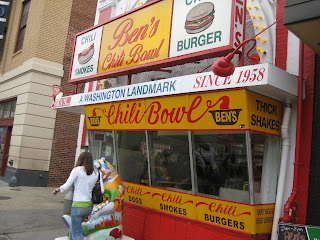 Their signature dish was a chili dog, and they had veggie dogs and veggie chili, so I actually could fit in with the group! 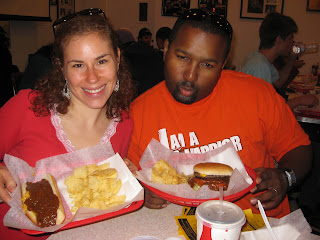 All the meat eaters verified that it was worth the hype, so I guess I could recommend it if you love chili and will be in DC. 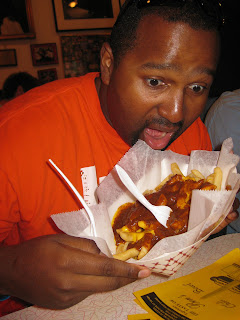 I learned when we arrived that the cherry blossoms are actually only in their prime for a week, and we were well into the second week, but we still had a fabulous time.
We took this picture in 2006: 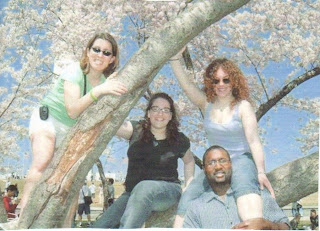 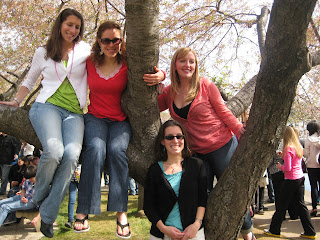 Clearly not all the same people, but close enough.
And continued to have fun with the camera after that: 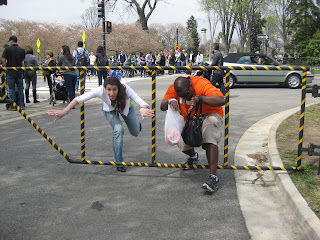 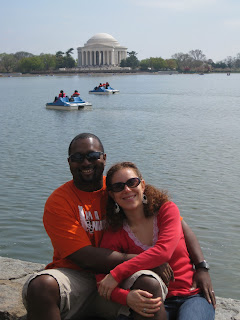 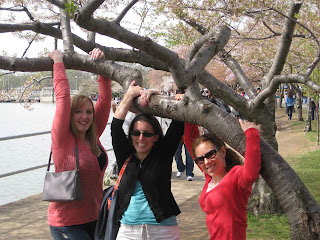 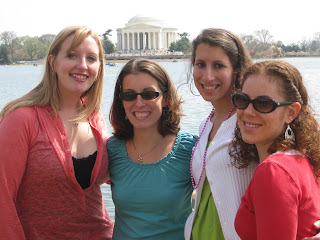 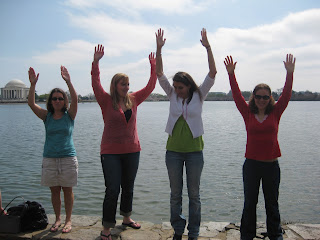 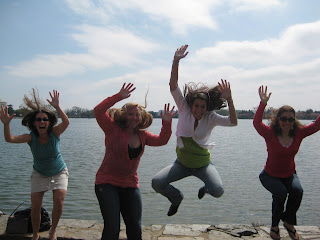 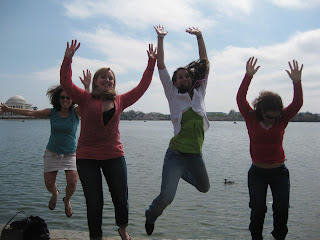 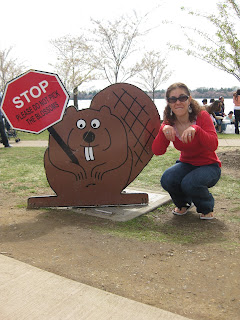