My husband is the world's deepest sleeper

I'm back! It's been a busy few days/lots of typing for my project few days which = I don't feel like staring at the screen and typing more on the blog. But then I miss it. It's a complicated relationship.


That about brings us up to speed. Did Jillian Michael's No More Trouble Zones (with the usual crying, cursing, and screaming in pain) with 30 minutes elliptical Wednesday, went for a 7 mile tempo run along a river in PA on Thursday, and Friday was a rest day.
I just did a 17 mile run with Mike and Lily, to train for my upcoming 50k race. We were super lucky it didn't rain, considering it poured on the way to and from the run.

I didn't know it at the time, but I risked my life changing clothes in a McDonalds before driving home from the run. The girl in the black is a student at my husband's school. Middle school.

I have a hilly ten miler planned tomorrow so I took my third ice bath when I got home. Eric couldn't believe how fast I got in, and said my reaction was now too boring and was not longer interested in videotaping every ice bath (I didn't really know that was the plan, but....). I think I am actually getting used to them. 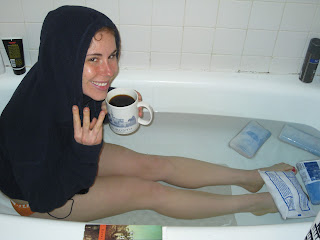 (I'm wearing a bathing suit, family).
Ice bath followed by stretching, foam rolling, shower, and compression socks. The whole 9 yards.
We have a hot date planned for tonight!
Posted by Alyssa at 3:15 PM