Bike Clips, A review, and Is that racist?

As always, I have a lot to say, so I decided to try breaking this blog post up into chapters.
Chapter 1: Bike Clips
You may recall, when I first got my bike in April, I went on a ride that made me want to drive straight to the bike store, return it, sell my triathlon entry on Craig's List, and cry for the following ten days.
Part of the problem was I had these toeclips, I was terrified I wouldn't be able to get my feet out if I started to fall. 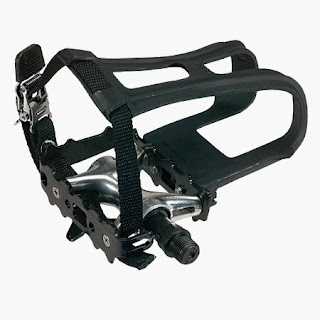 I had heard there were even scarier pedals where your shoes actually attached to the pedal, and thought "no way in hell those are ever happening". 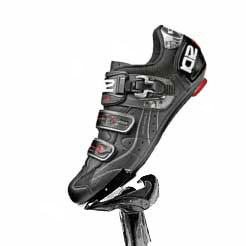 But then I got a tired of seeing everyone with clip - in pedals flying up hills ahead of me, and my mom asked what I wanted for my birthday, so...... 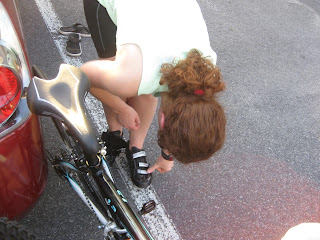 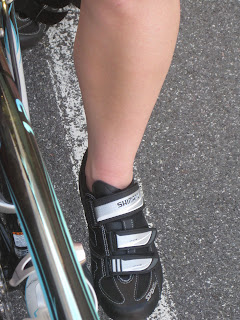 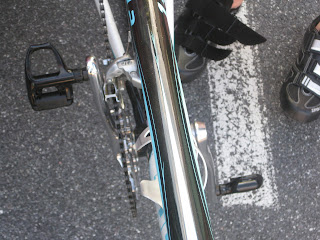 I am almost like a real cyclist - I now "clip in"! I went on an 8.5 mile ride with them after practicing for about 45 minutes in the store, just clipping in and out on the trainer (thing that holds the bike in place so it won't fall over). I actually really liked them, it's easier to pedal and getting in and out wasn't nearly as bad as I thought. Thanks, Mom & Vince!
Chapter 2: A Review
I am doing my first product review!  Lesley at Sweatybands was nice enough to send me a sweatband to review. Totally unrelated but happened at the same time: my dad went to a running store to get me a birthday present, and they recommended a sweatband, so he mailed me one as well! Wasn't that sweet?
I received my sweatyband for free, and we all know how much I LOVE free stuff, but I swear I didn't let it influence my opinion. That being said, this review WILL sound like I am being paid to do a sweatyband commercial.


I have ridiculously wild hair, and headbands always seem to be too tight and give me a headache. I've had success with bondibands, but they do fall out sometimes, and I don't like how big they are.
I was really excited when Lesley sent me a super cute design, and put it in around 9am to go to work (summer hours, people). I honestly forgot it was there, and even had a "what the hell is in my hair" moment when I scratched an itch. The real test came when, after wearing it all day, I headed out for a trail run around 6:30pm.
I know my hair doesn't look like it, but I swear this is a before picture. 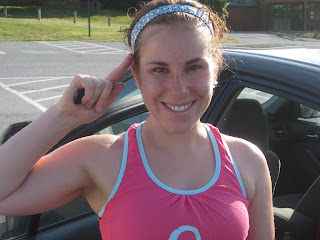 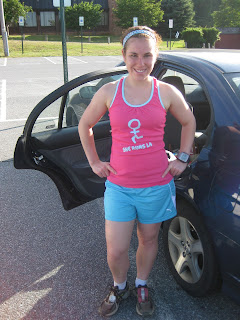 In other news, I finally got the cute tank top I am wearing from a virtual 10K that I ran back in April! Free entry from RunEatRepeat for the race + shorts from Nicole for my bday = free outfit!!!
As you can see in the picture below, after 5.23 miles I am quite sweaty, yet I didn't touch the headband once, and it is exactly where it was when I began. I didn't even feel it either! Even Eric was impressed and didn't believe that I hadn't touched it. 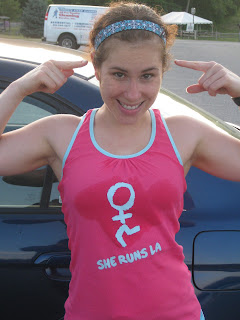 And how freaking cute is the design??? 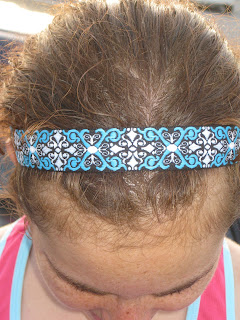 Success! Thanks Sweatyband!
Chapter 3: Is that Racist?
The trail run I did was a group run led by a local running store. No one, other than the leader, had run the trail before. Eric and I agreed to do two loops and meet up after that (we don't run together), but things got totally crazy when the end of the trail was fenced off and everyone found their own random way back to the start.
I still wanted to do two loops, but everyone had gone totally different distances and there was mass chaos and I wanted to find Eric to confirm what was going on.
So I kept asking people if they had seen my husband, and since none of us had ever met before, I told them it was the black guy. As you can see from the picture, he is, in fact, the only black guy running with us. 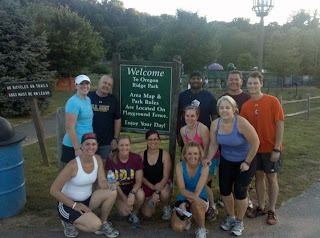 Everyone kept laughing and acting like it was a weird description, but, I mean, why was I going to waste time trying to describe the exact color blue of his shirt or something when he has a clearly defining characteristic that allows him to be immediately identified? If he was looking for me, he would have asked if people had seen the girl with the red hair, and no one would have batted an eye. So, was that racist?
Posted by Alyssa at 10:45 AM