Last night Eric was working, no one wanted to hang out with me, and I really felt I needed some human interaction to keep up my social skills, which are marginal, at best. I remembered I got a livingsocial deal awhile ago for 5 classes of either yoga, or something called "Drums Alive", which sounds really cool. Yoga was at 5 so I headed over.
Based on this plus another recent experience, which I'll be glad to describe to you in email if you are curious, I have decided I am banning myself from purchasing deals for places I've never heard of.
Picture me and a male yoga teacher, wearing tie-dye, all alone in the back of a....let's call it "affordable" banquet hall, literally standing on mats and going "OOOHHHHMMMMMMM", while caterers walked back and forth behind us loading stuff into a truck.  When he said we were going to do 3 "OHMS" I thought it was a pose I never heard of, but he literally meant we are going to pretty much yell "OHM".
Since it was just me he changed it to a power yoga class since I said I'd wanted to try it, and since he was just standing there watching me correcting my form the whole hour, I actually got a pretty good workout. Still weird though.
This morning the wonderful Baltimore Area Triathlon Club hosted a swim, bike, run (SBR) at Gunpowder State Park, which apparently is a local beach. I cannot say enough good things about Meetup groups. Seriously, go to the link and join. I learned to ride a bike, did my first trail run, did my first open water swim, AND did my first SBR through a meetup group - it's all totally free - they have all sorts of interest groups and they are in tons of cities!
I wish I had pictures, but it's super hard to take them while your swimming, biking, and running. Even harder when you leave the memory card at home in the computer.
Anyway, this was a huge learning experience. The packing alone was crazy, I thought I brought a lot of stuff to 20 mile runs, but that was nothing compared to this, I had to actually use a suitcase to fit my bike helmet, bike shoes, running shoes, towel, water, etc, etc. Actually I think bringing all that crap plus a bike down and back up three flights of stairs to the car should be considered a workout in itself.
I was having a major panic attack over what to wear and ended up going with a supertight running tank top with a built in bra (extra small was on clearance, I knew it would come in handy some day!), bikini bottoms, and my bike shorts. I had no idea what would happen when trying to run in bikini bottoms or swim in massively padded bike shorts.
The water was nice and warm and I did 1,000 meter swim (all the distances were pretty similar to what I'll do in my tri) with no problems except that my swim cap was falling off. All the fast swimmers went out first so I didn't get kicked in the face, and I felt pretty strong the whole time. I might have gotten a TEENY bit better at sighting (looking up to make sure you are actually headed toward the right direction and not out to sea, very important when you can't even see your hand in front of your face in the water). I wore my waterproof heartrate monitor and my swim took 32:51.
T1 (transition 1) was pretty smooth - headed back to the car, wiped off feet, put on bike shoes and helmet. I thought it would be weird to be biking soaking wet but actually it felt fine.
Apparently there were route sheets for the bike route, but I didn't know what the hell I was supposed to do with that, since I consider it a huge feat if I can scratch my nose without falling off, so holding, reading, and following a route sheet isn't in the cards for me.
Luckily, I had met a really cool group of people in another meetup group and they let me tag along with them. There were 5 of us, and I surprised myself by being in the middle, rather than last (of course, there were no giant downhills...) The bike ride felt great, I didn't feel tired or nervous at all, and it was over before I knew it. We did two 7 mile loops for a total of 14.03 miles in 1:02:06, average speed 13.6 mph.
After the bike was another easy transition to running shoes and hat. Going in to this, I figured, just get through the swim and bike, and the run will be easy.
UM, WRONG.
My legs felt like lead and no matter how hard I tried I could barely get them to move. I started to feel a little better after the first mile, but it was still tough. Probably didn't help that it was about 92 degrees at this point and I can't drink on the bike (or in the water) so I had barely hydrated. We did 2.58 miles in 24:35, and I was SHOCKED to see my average pace was 9:32, because it felt like I was doing 12 minute miles.
The outfit worked out great, and I'm SO glad I got this practice before the big day, 3 WEEKS from tomorrow, holy crap.
I feel bad that there are no pics in this post, so here ya go: 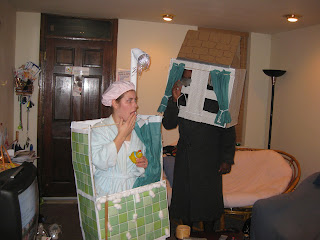 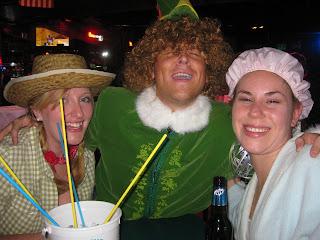