Today I actually broke in to my own home in my frantic hurry to take an ice bath.
But let's back up and talk about last night.
If you ever come to Baltimore because you can't wait to visit me, you need to have crabs, and an orange crush. 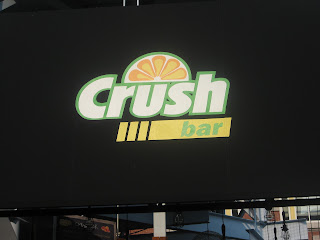 Last night, Casi, Carolyn, John, Deidre, Eric and I met for happy hour at an actual orange crush bar, which had all sorts of fruit options. It was also outside. The actual temperature was 104 degrees. I usually don't type out the names of my friends, since I figured most blog readers don't know them and don't care. Thoughts? 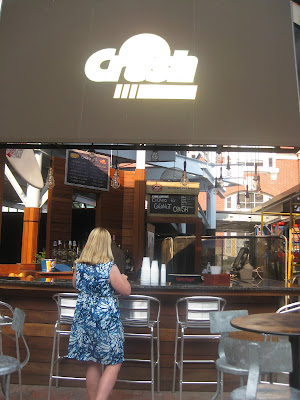 See how those chairs and tables were made of metal? Ya, sitting down wasn't feeling too good. And I nearly got third degree burns from touching the bar. But the drinks were delicious, and how cute was Casi's dress?
After a delicious dinner at a Mexican place that I wolfed down, we went to the best frozen yogurt place ever. We don't have a Yogurtland, so I can't compare. 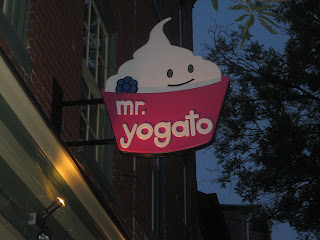 And I was pretty freakin' excited about this new flavor. 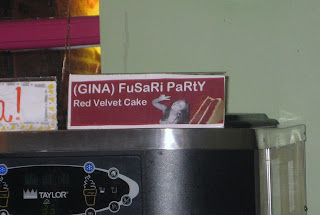 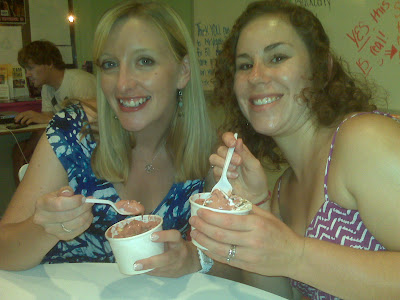 It was all I hoped for and more. Perfect end to the night.
I've gone on and on about how much I love my running buddies and don't know how I could ever train without them. But it's true.
If you ever are considering joining a running group, here's yet another reason too. You might meet really nice awesome runners that live close to good frozen yogurt places AND close to the place you are running, so instead of going home in between, you can just crash on their super comfy guest bed.
My friend Jackie declined the frozen yogurt invitation but still let me sleep over, and was even nice enough to stay up extra late to let me in.
Since the temperatures were ridiculous, we met  up with our friends Mike and Jill at 6am, with the goal of doing 16 miles before 10am when it was supposed to hit 90 degrees.
4 hours sounds like a long time for 16 miles, but when you factor in bathroom breaks, stretching at the start, water breaks, etc etc, the long runs take a pretty long time. We started at 6:18 and finished around a quarter to ten.
Even at 6am it was over 80 degrees, and the humidity made it feel like we were breathing underwater. Some of the run was shaded, but some was in that brutal sunlight. We decided to ignore pace and just get the miles in. As always, we chatted the whole way and for being hot, the run was really fun and flew by. I accidentally forgot to restart my Garmin at one point, so I don't have a time, which I am not-so-secretly happy about.
You know it's hot when:
But check out those hot legs! 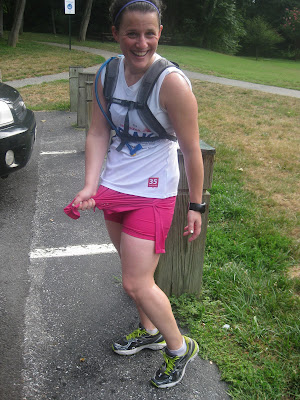 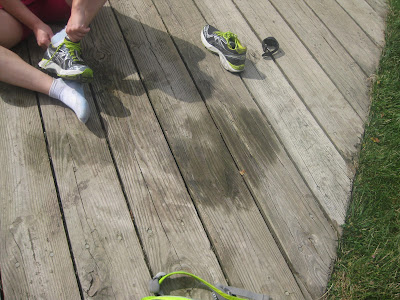 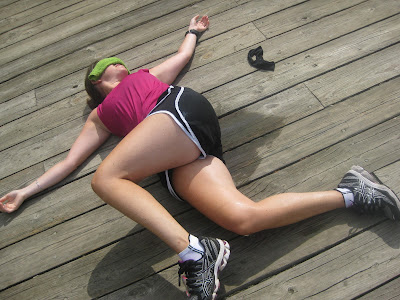 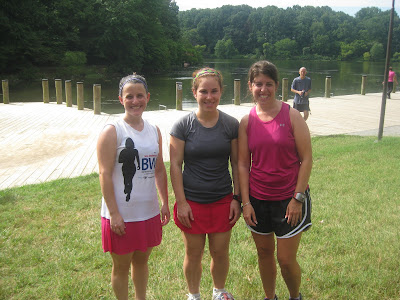 After dropping Jackie off, I headed home. I picked up two bags of ice on the way. I had been encouraging Jackie to try out an ice bath on the run, and I said the only way was to rush to the bathtub as soon as you get home. If you get distracted checking facebook or getting food, you'll lose all determination and fail.
So  by the time I got two bags of ice, my overnight bag, and my coffee that I bought for the ice bath (because clearly I need hot coffee during, and iced coffee after, and I can't make both at the same time) up three flights of stairs to our apartment, I was more than ready to get it over with.
I unlocked the door, and discovered Eric had put the chain on. Which now that I read it, doesn't make him sound too good. But remember, I had slept at Jackie's, and he had worked at the bar until late. So he had obviously gotten home at some crazy hour like 4:30am, and just did it automatically.
But the problem was, as we've all seen, Eric sleeps like the dead, and I knew waking him up, especially after work, would be nearly impossible. Luckily though, whenever I'm not there, he ALWAYS falls asleep on the couch, which is right inside the door. 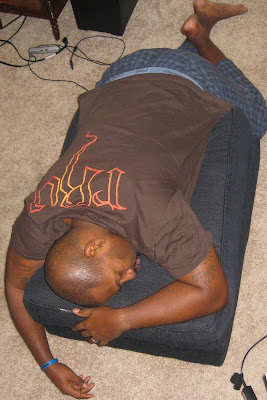 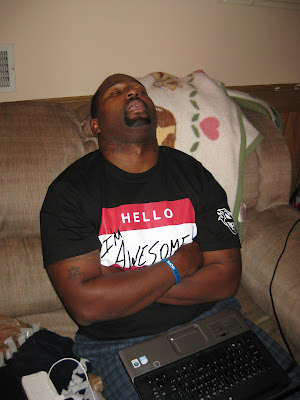 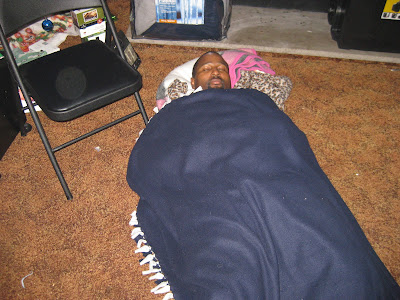 Apparently this was the one time he made it to the bed.
I knocked on the door.
Nothing.
I called him.
Nothing.
I started knocking really loud. I thought if I rattled the door, he might hear that. So I started rattling it, and apparently I don't know my own strength, because the chain busted right off. 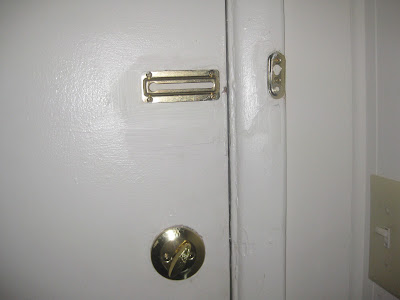 So I essentially broke in to my own apartment.
Now let's imagine it from Eric's perspective. You get home super late from working a hot night at your second job, probably finally fall asleep around 6am, and are woken up several hours later by a crazy lady screaming your name and the sound of someone breaking in.
Oops. Wife of the year, right here.
Posted by Alyssa at 12:54 PM