Once again I haven't posted for several days, so I'll catch up on the week with a long post with very few pictures. Yesterday was my last day of summer class, so I've been mainly working on finishing my project. I was going to tell you guys to just imagine me sitting at a computer, but then I took an awesome self timer picture of me about to write this post, that cuts off my head. You're welcome. 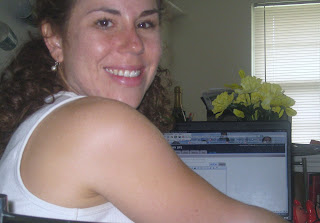 Since last weekend's half marathon and duathlon, I've official begun following my training plan for the Baltimore Marathon. So here's what that's looked like:
Monday - I had planned on taking a rest day. Logic keeps telling me that when my legs are tired from racing, a rest day can technically include upper body work, but I keep ignoring it, because I hate upper body work. I compromised with Jillian Michael's 30 Day Shred Level 2, it has lunges and squats and cardio, but my legs actually felt fine so I went for it. It had me cursing and yelling at the TV, because my arms are weak. I went to yoga after, but they wouldn't let me in, because the class was full. So I surprised myself by going home, changing to sneakers, and doing 40 minutes on the elliptical.
Tuesday - I am making a vague attempt to go through Jillian Michael's 6 Weeks to 6 Pack abs again. And maybe actually sticking with some ab work when it's done. So, I did that, then headed to the track to meet with my running group. Instead of track work, we did a 1.5 mile loop around the campus, just under 3 miles on a trail, and another campus loop. The loop is mainly uphill with some random parts where you are supposed to speed up, conveniently located at the bottom of hills.  The first one I got caught up chatting and then realized I was running way too slow. Oops. I did the trail miles with some fast friends who weren't in to walking up hills, so I ran the whole thing at a quick pace, then tried to push it for the last campus loop.  The last .6 mile was at a 7:47 speed!
Wednesday - Training plan called for an easy 6 mile run, but I replaced it with a hard - because - I - felt - like - crap hard 5 mile run. It was only 10 hrs after I'd finished the track workout. Here's how tired I was. My mom gave me a copy of her Book of Mormon CD, and I was all excited to listen to it on my ipod.
Somehow, when I transferred it, I accidentally transferred Eric's Insane Clown Posse playlist instead.
So, you would think expecting to hear Broadway showtunes, and getting creepy white rappers would immediately elicit a "something's wrong" response. Nope. I ran for a quarter mile before catching on. The really sad part was I had listened to the CD on my way to the track the night before. So I kept thinking "hmm, this sounds different than last night. when are they going to start talking about the book?". I think when I run at 5:30 for at least the first mile I am sleep running.
Later in the day I did 6W26P (I'm not typing 6 weeks to 6 Pack abs every time - I might just start saying 6).
Thursday - Woke up at 4:50 am and drove to Lily's house to do a tempo run. Personally, I find it really hard to push myself for those. We did 4 tempo miles with a warmup and cooldown, for a total of 6. There was a little hill, but it was waaaay flatter than my neighborhood. Tempo miles were 8:51, 8:32, 8:43, 8:14. Can you tell which one the hills were?
I'm possibly doing 6W26P again and heading to Bikram later. We'll see.
Other news:
1. Eric said he wanted to try to eat more colorful veggies (he's been watching Dr. Oz a lot on his time off), so I made this salad, from my new favorite recipe blog. I used homemade french bread too, so it was really good. 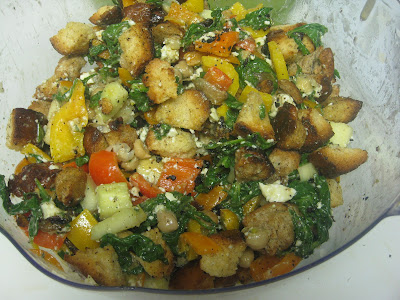 I highly recommend checking it out. I love how all the recipes come with a little story about why the blogger (The Crouton Queen) made them, and they are easy to follow without 500 unnecessary pictures so it takes forever to get to the recipe. Supposedly The Crouton Queen hates salads, but loves this, so I was curious to see if Eric would have the same reaction.

I'm not one to be filled up by salads, and this did the trick. You should all make it.
2. After 5 half marathons, 2 marathons, and 2 ultramarathons, I finally have a black toenail. WARNING! Picture to follow.
3. Kara's doing a raffle on her blog to win awesome prizes (but you can't have the one I want), and the proceeds benefit a great charity. Go give tons of money!! Or at least skip tomorrow's latte and give $5.
Posted by Alyssa at 2:38 PM