Yes, I understand that it's fully my choice to sign on to facebook and read people's statuses, but it's something I enjoy, so can't we just all agree it's hot out and start posting about other stuff?
Biking is a good activity when it's hot out, because you generate your own wind, like being in a fan. Lily, Jackie, and Jackie's friend Brian met at Lake Montebello yesterday and did an easy ten miles. 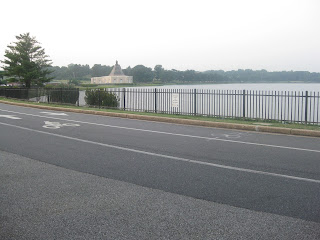 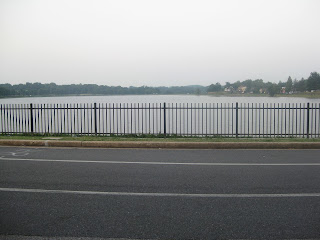 It was more of Lily and I's last ditch effort to convince ourselves that we are ready for a triathlon than it was a workout.
I have a love for Jillian Michaels, and I have an addiction to her podcasts. I've listened to a lot of them on my way to meet Kara for long runs, which I think Jillian would be proud of. I also started listening to one while I made my anniversary chocolate cake, which I think is probably not quite what she was going for.
Last night I was listening while I made dinner and Jillian confessed a "binge". She said she got completely out of control and ate 7 organic Newman - Os, aka organic oreos. I think Jillian has "binge" confused with "day where you eat slightly more cookies than normal". Then she hit the stairmaster the next morning and made sure to burn off the exact amount of calories she ate during her binge the night before.
This got me thinking - I think it's safe to say she's crossed the line and gone from healthy to compulsive. Although, to be fair, her livelihood depends on her body. Even gaining a few pounds could jeopardize her entire career. But, I do think it's a fine line, especially in a society that almost considers healthy and compulsive synonyms.
At work, people think I have this rigid, never faltering diet (meaning what I eat, not weight loss plan) because I don't have EVERY treat that's offered to me or have a drink at EVERY happy hour. But, in all honesty, there are so many treats available there, that I would start putting on weight if I had one every single time. I try to just be a snob - stale cake from the grocery store? No thanks. Homemade whipped cream and fresh strawberries? I'll take it.

Sometimes it seems there's a bit of a mixed message in the blog world - everyone is obviously into healthy recipes and exercising. But then there's also the "have a cookie, live a little, eat that ice cream cone, you can have a treat!" mentality, which I clearly live by. Jillian's message is the opposite - that every choice you make affects your body, and you can never forget that. Where's the happy medium between living a little and being healthy - when do you say no to "living a little"?
Personally, I think if you've gotten to the point where you feel compelled to count and burn off every single calorie, things have gone too far. But, Jillian is the fitness guru, and has made millions by teaching people her ways. And, her workout DVDs and cookbook haven't led me wrong either, so maybe she does have a point.
Where's the line for you? Do you think Jillian's behavior is crazy, or does she have it all figured out?
Posted by Alyssa at 7:28 AM