Last night was spent doing my favorite thing ever. 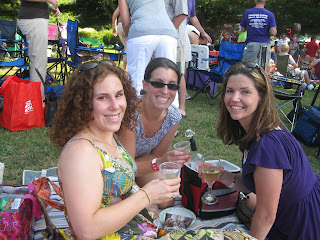 Drinking wine while having a picnic outside. My friends Carolyn, Deirdre, and I went to an outdoor concert at my favorite winery, Boordy, and it was a perfect way to spend a Saturday night. Here was our sunset view: 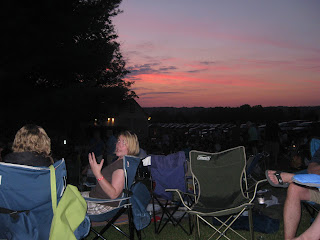 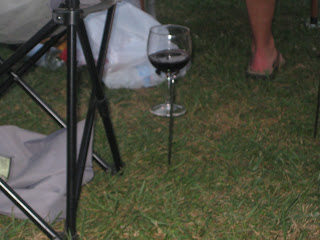 I really want one of these to make this activity even easier for me.
A night of drinking wine and sitting on the ground is excellent preparation for a race in the morning. But since I'm running my second 50K in just one week, I was mainly using this race as a good chance to try a new trail without getting lost and seeing how my Dreaded Druid Hills tank top gets along with my camelbak.
This "race" was put on by the Baltimore Road Runners Club, a local non-profit running group that does a lot of events, so it was extremely low key, it wasn't even on active.com. You just hand them $6 when you arrive in the morning, which I actually forgot to do even though the money was in my hand. I could have gotten a free race, but I went back and paid. However, if this had been a $100 marathon, I can't say I would have made the same decision. 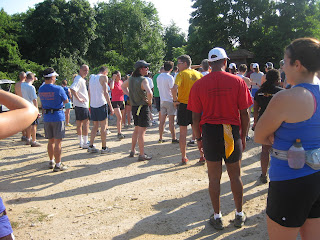 Here's the "crowd" at the race start.
We started and finished at the Sweet Air area of Gunpowder State Park. The website said there would be several stream crossings, one at least thigh deep. When we were about to begin, they told us that if we were worried about getting lost, to make sure we were in last place, and to tie our shoes tight due to the bogs. Um, did I sign up for warrior dash part 2?
And then we were off. 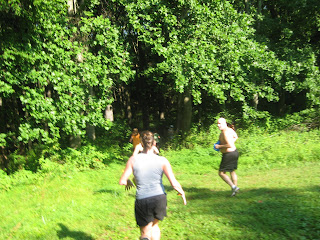 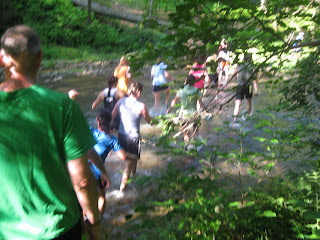 The stream crossings felt SO good while running in the heat, I recommend they be added to all summer road races. Let's at least hope there are some in next weeks 50K.
I didn't really push it or anything, I just enjoyed the race and chatted with other runners. There were some steep hills that I had no problem walking up and some seriously muddy areas that were sucking me in like warrior dash, but luckily my shoes stayed on.
The course was supposed to be 7-8 miles, but ended up being 6.41. Whatever, I'm supposed to be tapering anyway. There wasn't exactly chip timing so I'll go by my Garmin, which said 1:17:16, average pace 12:03.
We ran through this hay field at the end....weird. 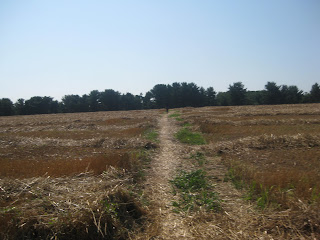 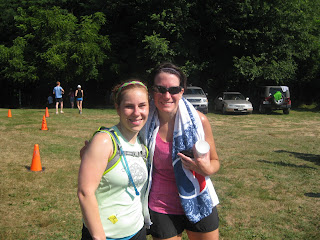 My new friend Heather and I at the finish. Sometimes when you just meet someone it's weird to figure out when you can call them a "friend" so let's just hope she's not sitting at home reading this going "um, FRIENDS? think again, psycho". 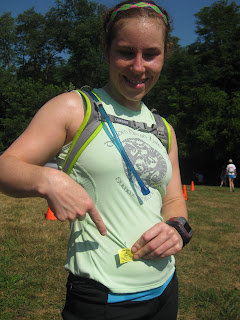 Showing off my bib at the finish line. It's those orange cones behind me.
I got an everything Panera bagel at the end, so $6 well spent.
Now I have something awesome to show you. I think it's sweet that a lot of blogger's boyfriends and husbands read their blog every day, but I'm also glad mine doesn't, so I can publish pictures like this. 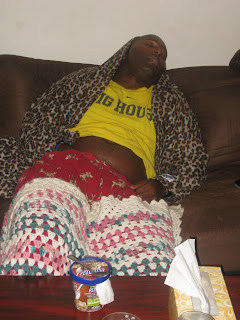